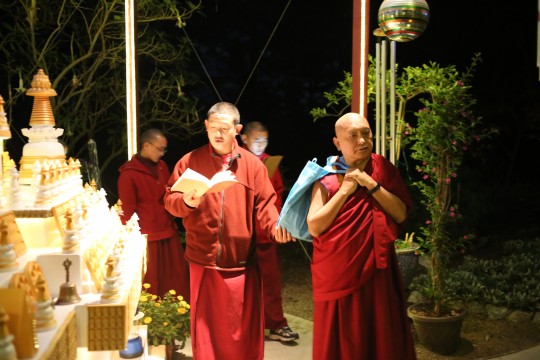 When Lama Zopa Rinpoche is at his residence in Calfornia, Kachoe Dechen Ling, he often joins in the weekly animal liberations that the Sangha do on behalf of all who are sick. These liberations include extensive prayers and practice, according to Rinpoche’s advice, with emphasizes taking the animals around holy objects (At Kachoe Dechen Ling they are taken around the stupa which, itself, has many smaller stupas and tsa-tsas lining every edge), and blessing them with mantras and water blessed by mantra before they are released. 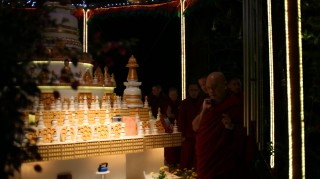 In these photos, Lama Zopa Rinpoche is carrying worms that have been liberated (these worms would have been used as bait for catching fish). Rinpoche is carrying them with this right arm, which is still healing following Rinpoche’s stroke, so this practice also serves a form of exercise. The Sangha circumambulate, chant mantras and prayers and offer incense. The animal liberation practice is typically offered in the afternoon, but often when Rinpoche is in the house it can happen very  late at night.

You can learn more about the Animal Liberation Fund and offer your support.