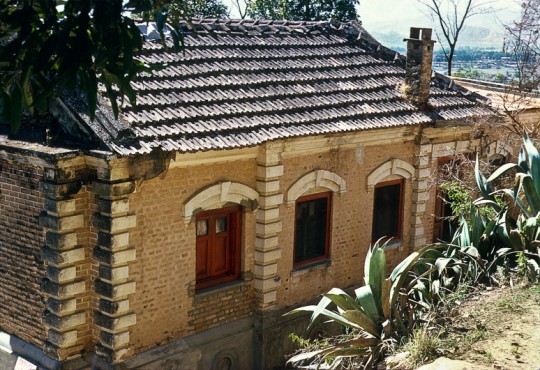 The Chenrezig gompa was in the original “old house” at Kopan, pictured here in 1969, until a new gompa was built in the 1990s. Photo courtesy of Lama Yeshe Wisdom Archive.

The Chenrezig gompa at Kopan Monastery is one of FPMT’s most precious destinations.  Since the early days of the organization, this gompa has been a place for new and seasoned students to engage with the Dharma, strengthen their practice, and connect and reconnect with Dharma family old and new. The gompa was severely damaged in the April 2015 earthquake and subsequent aftershocks that struck Nepal. Due to a very kind benefactor, a team of engineers from Taiwan flew to Kopan to professionally evaluate the structural damages to buildings. Based on their advice, the entire Chenrezig gompa was pulled down and is being rebuilt. 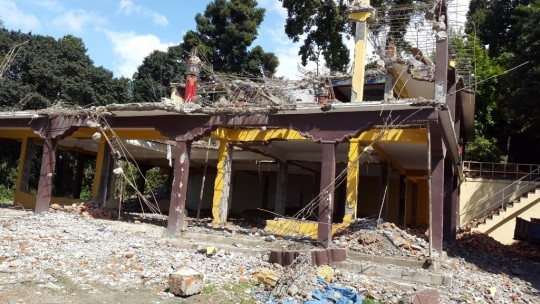 The Chenrezig gompa was severely damaged due to the earthquake but is now being rebuilt.

Many donors generously came to Nepal’s aid through the Nepal Earthquake Support Fund which was set up by FPMT International Office immediately following the earthquake as a way to help raise funds for both short-term relief needs and long-term rebuilding plans.

You can read a recent report on the Nepal Earthquake Support Fund to learn more about the ways this fund has contributed to short-term aid and long-term rebuilding needs in Nepal.

Problems come when you are not living in a natural state of mind. Then, no matter what you are doing, your mind will be on something else. You are supposed to be cleaning your house, but your mind is thinking about going to the beach and eating ice cream. That is when you run into difficulties.