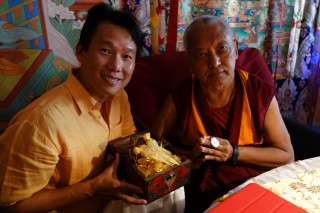 Fred Cheong (now ordained as Ven. Drachom) is offering Rinpoche a medallion with 1,000 Namgyalma mantras on it. Photo: Ven. Roger Kunsang May 4, 2013.

Earlier this year, Ven. Drachom (Fred Cheong), vice president of Amitabha Buddhist Centre’s (ABC) executive committee, pledged to liberate 10 million beings for the long life of Lama Zopa Rinpoche and a team of ABC volunteers are involved in making all of this happen. Ven. Drachom first began doing animal liberation practice when Geshe Lama Konchog became ill with cancer in 2000. He pledged to Lama Zopa Rinpoche to liberate one million animals for Geshe Lama Konchog, which he did and then some. When Rinpoche manifested a stroke in 2011, Ven. Drachom and his team liberated 10 million animals in four months, dedicating the merit to Rinpoche’s complete recovery and long life.

About once a month at ABC, sea creatures are purchased at a seafood market to liberate. Then they circumambulate the animals around center, which has 100 sets of the Kangyur and Tengyur as well as more than 300 stupas and many holy objects, including prayer wheels and statues. They do the animal liberation practice in the FPMT Prayer Book. Then, using a boat, the animals are taken to a place where they can be released. “We have good conditions to do this,” Ven. Drachom explains. “We are close to the sea and have a good place to release them, where they are in the correct environment.”

“At ABC, our intention is to continue doing animal liberation practice and benefiting beings forever – life after life,” Ven. Drachom said. For the future, he envisions that those who know about doing liberations and who have liberated many animals will teach and share that knowledge with others.

Please rejoice in all the lives saved and thank you to all the kind donors, Ven. Drachom and the students of Amitabha Buddhist Center who help to make all this possible.