MENUMENU
Mandala Archive Mandala for 2012 April Report from Bodhgaya: On the Ground at Kalachackra 2012

The Devastating Side of Pilgrimage

“Should we live with ever-growing mountains of garbage because we are unable to manage the effects of consumerism?” – His Holiness the 17th Karmapa

A site of brutal poverty, pollution, bacteria and dirt, Bodhgaya is arguably one of the most blessed places on earth.

The challenges faced by visitors to Bodhgaya have never been more apparent than at the Kalachakra 2012 initiation, given by His Holiness the Dalai Lama December 31, 2011 to January 10, 2012. The celebration of world peace drew visitors in astonishing numbers to the site where the Buddha attained enlightenment: there are reports that as many as 350,000 pilgrims made their way to a village that’s normally home to 30,000.

People of all nationalities wrapped themselves in blankets against the cold, many in face-masks to keep the dust out. Thousands of monks and nuns came from Nepal, Mongolia, Bhutan, China, Cambodia, Japan, Korea and Thailand. Beggars lined the streets, dressed in rags, clutching begging bowls, some bandaged or on crutches, some so badly deformed they shuffled along on all fours, all without a place to sleep at night. Black hogs, goats, cows and people alike scavenged through piles of rubbish. 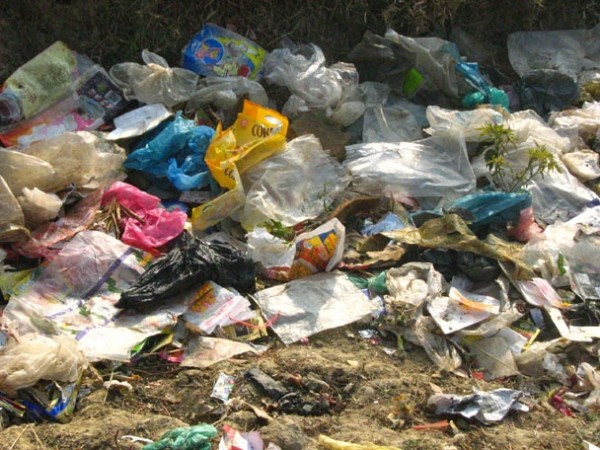 Piles of disposable plastics are part of the devastating effects after huge tourist surges in Bodhgaya, such as occurred during the Kalachakra initation in the beginning of 2012

Although peace was unmistakably the focus of the event, the environmental consequences of this brief but overwhelming burst of tourism were devastating. Huge numbers of tents were erected to provide temporary accommodation for the masses, and severe strain was placed on the village’s infrastructure. Sewage systems were blocked, water resources drained, and untenable mountains of rubbish built up and were burned on the streets.

While His Holiness has long advocated the importance of environmental protection and several other prominent lamas have become spokespersons for the green movement, raising awareness is no small issue, particularly in such intense and hectic circumstances.

“It was unbelievably crowded,” said Caroline Martin, an American journalist who writes about India and Nepal, on a visit to Bodhgaya for the first time. “Things were really chaotic. During the Kalachakra I basically felt like I was fighting for air the whole time.”

Although confronting for first-timers, the melee was predictable, and methods were put in place well in advance to curb the worst of the problems. The precautions were spearheaded by Sacred Earth Trust (SET), an organization with headquarters in both India and the UK, established to support the environmental protection of sacred sites and UNESCO World Heritage sites around the world. SET has been working since 2009 to address the problems brought on during the tourist season in Bodhgaya. 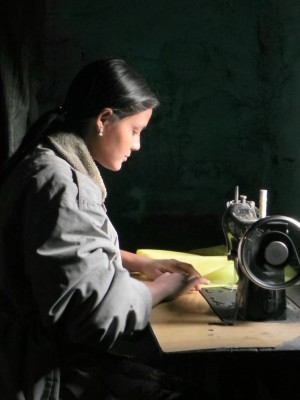 80,000 cloth bags were sewn by local women to help limit that amount of plastic disposed of within Bodhgaya

In preparation for this season’s throngs, 80,000 cloth bags were sewn to be used in lieu of plastic bags, bringing much-needed income to local women; local hoteliers and businesses, monasteries and schools were educated about environmental hazards, recycling and waste disposal; and SET put the word out to Buddhist centers around the world as well as to various media outlets, encouraging people to travel to Bodhgaya responsibly.

Perhaps most importantly, SET went about making changes at government level. In 2009 SET’s UK-based Director Lillian Sum and a team of local and international volunteers successfully campaigned to have all disposable plastics banned from the area by collecting 7,000 signatures in favor of the ban. It was a jubilant moment when the campaign was approved by local government, with new practices being adopted from April 2011.

This campaign was inspired by His Holiness the 17th Karmapa, whose winter residence at Tergar Monastery lies on the fringes of Bodhgaya. In recent years the Karmapa has become increasingly engaged with environmental concerns. “As I grew up and began studying Buddhist philosophy and teachings,” he said. “I discovered great harmony between Buddhism and the environmental movement. The emphasis on biological diversity, including ecosystems – in particular, the understanding that animate and inanimate beings are parts of a whole – resonates closely with Buddhism’s emphasis on interdependence.” 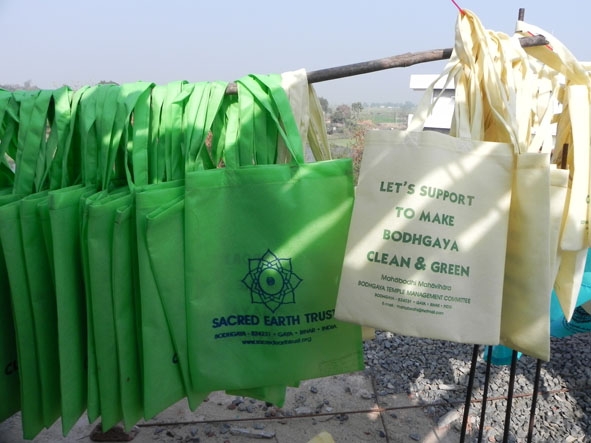 Sacred Earth Trust provided alternatives to plastic bags to 80,000 people, about a third of the total number of attendees to the Kalachakra initiation in Bodhgaya, India, January 2012

A few years ago the Karmapa became aware of various dumping grounds for rubbish in the vicinity of Tergar. It was immediately apparent that plastic was the main pollutant – disposable plastics such as bags, polystyrene plates, cups, and packaging for food and domestic goods like washing powders.

These all-too-common disposable plastics can leach chemicals that are perilous to human health, and contaminate soil when left to decompose for long periods in dumping grounds. When burned, they release chemicals into the atmosphere that contribute to respiratory and other health problems as well as carbon emissions.

The Kalachakra and its accompanying influx of tourists really put to the test the effectiveness of the plastics ban and SET’s efforts to control waste. Three hundred laborers were brought in to work night and day to keep the village tidy, along with 13 supervisors. Close to 50 vehicles were brought in for the purpose of garbage removal. Two hundred dustbins were set in place permanently, and three large permanent garbage dumping sites were created to replace the side-of-the-road dumping grounds.

According to Ven. Tenzin Yangdron, a German nun who lives in Dharamsala and stayed at Root Institute during the Kalachakra, “When I went to the teachings in the mornings, I saw a lot of local people sweeping the streets and collecting garbage. The streets were clean around the temple area. But in the fields, you could still see lots of garbage around the tents. A lot of cleaning was going on, but there was just too much garbage so they couldn’t take away everything.”

Lillian concedes that despite their best efforts, SET’s measures were hopelessly inadequate in the face of the numbers who came for the initiation. “Local government was great during the whole time, keeping the main areas really clean,” she said. “But it wasn’t possible to implement the plastics ban at this time at an event of this size.” This was in part due to the locals’ hesitation for financial reasons. “Most understand the issue, but if they feel it will affect their business, they will not make changes.”

Caroline Martin feels disturbed by the waste problems she witnessed. “Burning plastic every evening around 5 p.m., it’s like a ritual. The burning plastic smell comes up and you have to cover your mouth. The tourists can just come through and grumble about it and leave, but I really feel for the people who live here because they’re being exposed to a lifetime of these burning toxins, and certainly it’s going to limit their life expectancy. I’m not sure what the fumes are, but I get chest pains when I smell them. And it seems like they destroy any kind of healthy environment that could exist.”

Given the amount that still remains to be cleaned up, long after the dispersion of the Kalachakra’s crowds, does Lillian feel that SET’s efforts have collapsed in the face of so many tourists? “We were lucky to have it so clean during the event,” she said. “But now it’s the aftermath and most – if not all – of the support and resources have been reduced back to normal size. Only minimum equipment is available.”

It’s no easy territory to navigate, but Lillian is far from giving up. She’s aware that the government’s implementation of the plastics ban is key, but also that a long-lasting result will only come about through education. SET’s ultimate goal is to encourage local people to take responsibility for the caretaking of their own environment and resources. To this end, SET will facilitate workshops this year that continue to raise the villagers’ awareness about plastic pollution and its effects on land, water courses, human and animal health. Other subjects are on the curriculum too: zero waste, permaculture, how to reduce carbon emissions, green building design, tree nurseries, organic plantations, seed sovereignty, renewable energy, eco-technologies, and the production of cottage handicrafts using waste materials, to name a few.

Good news came on February 4: the chief minister announced that he would continue to support Bodhgaya as a plastic free zone and give funds to develop a solid waste management system. In addition to the workshops, then, SET will be working with the government on setting up a recycling center for the polystyrene and plastic bags which currently aren’t being recycled. Government officials and the heads of the village are also ready to start enforcing the plastic ban, a necessary step at least in the beginning until people really understand how harmful the waste can be.

Sustainable practices such as these are essential for a sustainable future for Bodhgaya. The need for them is all the more urgent due to a decision recently announced by Bihar’s chief minister: a new four-lane road is to be built between Patna and Gaya in order to encourage greater numbers of visitors to Bodhgaya in the future.

Catriona Mitchell is an Australian literary events programmer and producer, as well as a freelance writer on arts and the environment. She has an M. Phil. in Creative Writing from Trinity College, Dublin, Ireland.

Sacred Earth Trust  is a not for profit organization set up in 2009 to support and encourage the sustainable development and environmental protection of Sacred sites and UNESCO world heritage sites around the world, through working in co-operation with the local, indigenous people and international groups. It has offices in the UK and India.