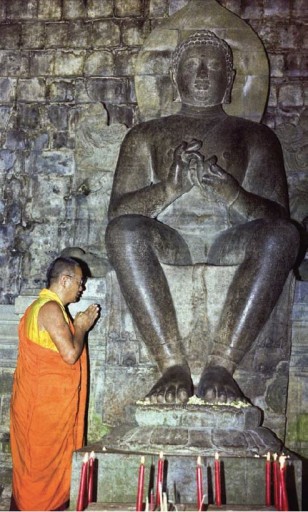 In 1977, Lama Yeshe visited Disneyland in Anaheim, California and was impressed with the Audio Animatronic Abraham Lincoln featured there which charismatically delivers the Gettysburg Address. Shortly after the visit, in 1978, he informed Harvey Horrocks, Peter Kedge, Nicole Couture and Ven. Yeshe Khadro about his vision to build a large statue of Manjushri at Manjushri Institute in Cumbria, UK. It was to be several stories high and would “speak” recorded teachings, just as the Disneyland robot had done. Peter Kedge remembers, “This was the first time I recall Lama talking about building a giant statue. Here we all were completely overwhelmed with what we had taken on at Manjushri Institute [est. in 1976], and Lama was planting yet another extraordinary vision before us. That statue was never built, but four years later Lama began talking about building a giant statue of Maitreya Buddha.”

In 1982, two years before his passing, Lama visited Tibet alone. At this time, Tibet was just beginning to be accessible to visitors and China was in the early stages of opening up to commerce and tourism. During this trip, Lama was inspired by the large statues of Maitreya Buddha that still stood in Tibet.

Following this visit, Lama began mentioning to people, including Lama Zopa Rinpoche, his plan to build a huge Maitreya Buddha statue in Bodhgaya, a city in the Indian state of Bihar, where Shakyamuni Buddha achieved enlightenment. Merry Colony, who served as co-director for the Maitreya Project from 1993 until 1995, remembers Lama’s plan well. While riding in a rickshaw on the main road into Bodhgaya, Lama turned to Merry and said, “I want a huge Maitreya Buddha statue here. I want it so big that the planes flying overhead will see it. And I want it to talk!” In mid-1983, Lama wrote a letter to Ven. Kabir Saxena, then serving as director of Root Institute, explaining that he wanted a Maitreya statue in Bodhgaya, at least the size of the Boudhanath Stupa, and he wanted it to be “speaking teachings.”

Lama felt that the essential quality of Maitreya Buddha, universal loving kindness, is both fundamental and critical for the world. Further, Lama suggested that the statue would benefit Buddhists and non Buddhists alike, and that the local benefits of building the statue would serve toward thanking the people of India for giving Buddhism to the world.

When Lama passed away in 1984, Lama Zopa Rinpoche took Lama’s wish to build the huge Maitreya statue to heart. This endeavor became known as the “Maitreya Project.” Rinpoche quickly received energy and commitment from students interested in bringing Lama’s wish into reality. At first they received no specification of an appropriate size for the statue – only that it had to be “huge.”

Over the years, and through many yet to be told extraordinary difficulties, the details of this “huge” statue have taken shape as successive students of the lamas held the title of “Director” starting with Prodipto Roy, Joya Roy and Ven. Kabir Saxena around 1985-1986 and then passing the responsibility to Ven. Yeshe Khadro in 1991. …

When you recognize your problem comes from your concept or your concept is the problem, you don’t blame others.