Creating a three-dimensional image of Lama Yeshe as he appeared to his students while teaching was, many thought, an impossible task. Yet sculptor Jim Westbrook, himself a student of Lama Yeshe, has created a life-size bronze statue that effectively captures an aspect of Lama’s lightning energy.

When he was teaching, Lama Thubten Yeshe was constantly in motion. No one who ever saw him could easily forget the thump of a hand to his chest to illustrate the inner nature of compassion, or the arch of his eyebrow as he asked, “Understand, dear?” Lama Yeshe used hand gesture, facial expression, and body language fluently in his quest to bring Buddhism to Westerners. 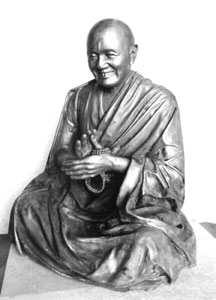 Lama Yeshe’s style of teaching was deeply radical in the context of traditional Tibetan Buddhism. He actively sought Western students from among the hippies who found their way to Nepal in the 1970s. He connected them to Buddhism with his vibrant humor, his inexhaustible appetite for questions, and his patient research into his students’ culture, interests, and concerns. His palpable compassion drew people to him, and his skill in using any teaching means at his disposal, including the roller coasters at Disneyland, kept them involved. He taught a semester at University of California at Santa Cruz, and after explaining the negative consequences of violent behavior, got everyone in his class to promise not to kill people in order to solve problems. Effectively, he had everyone take refuge, but without mentioning Buddha, Dharma, or Sangha.

So it seems fitting that an image of Lama Yeshe would reflect that radical nature by portraying him as he appeared during his teaching career, even though, traditionally in Tibet, when a statue of a departed lama was commissioned, the image presented was youthful and idealized.

Jim Westbrook received the request for such a statue from two different sources at around the same time. He had gone to visit Lama Zopa Rinpoche, and Jim’s wife Kathy had shown Rinpoche Jim’s realistic sculpture of a Tibetan woman. “Rinpoche had great fun with that sculpture,” Jim said. “He dressed it up in robes and took it to show to Geshe Sopa. I knew when Rinpoche then asked me to sculpt Lama Yeshe that he wanted an image like that. The project was interesting to me because it was iconoclastic, and this direction came from Rinpoche.”

Simultaneously, a committee interested in creating a shrine for Lama Yeshe at Lama’s cremation site at Vajrapani Institute also approached Jim about creating a life-size and life-like statue to be the centerpiece of the shrine, and raised enough money to begin work. A well-known photo of Lama Yeshe teaching was chosen as the principal example of the image to be created.

If you follow self-cherishing thoughts, those thoughts become your identity. Then anger, pride, the jealous mind – all this negative emotional stuff arises. When you let go of the I and cherish others, negative emotional thoughts do not arise. That’s very clear. Anger does not arise at those you cherish.