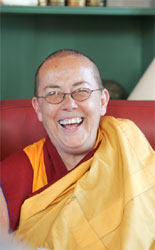 A perfect question. And the perfect answer, which I heard from a lama, is: “Anger is the response when attachment doesn’t get what it wants.”

But how to get to the bottom of this? How to go beyond its being a cute saying? Lama Yeshe is not kidding when he says that we need to be our own psychologists. You could argue that we’re not really Buddhists until we work on our minds.

This is logical. In the second of the Four Noble Truths, Buddha asserts that the two main causes of our suffering are our past negative actions and our deluded states of mind. These two subsume into one, the delusions. Because of these negative states of mind, we act inappropriately by harming others, thus sowing the seeds of our future suffering.

Given, as Buddha points out in the third Noble Truth, that we can be free of suffering – thank goodness! – we need to cut this cycle of madness. In relation to the two main causes, there are two main practices to be done.

The most urgent, as Lama Zopa Rinpoche points out, relates to the delusions: Initially, at the very least, don’t respond with negativity. (The second is to stop the seeds we’ve already planted from ripening as suffering; this is called purification.) But the real practice begins when we learn to identify the neuroses and remove them. …