The Benefits of the Mani Retreat 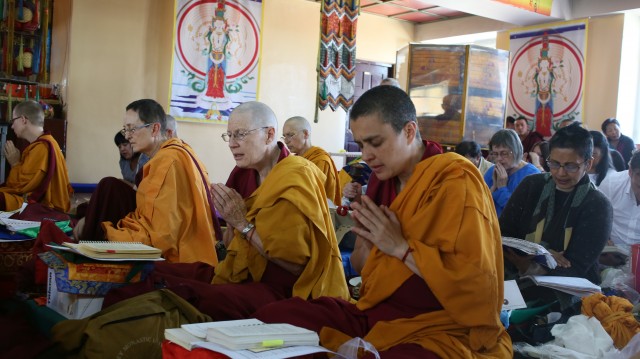 The accomplishment of the 100 Million Mani Retreat in Mongolia in August 2013 is momentous for FPMT. The purpose of the retreat, in part, was to help reestablish Buddhism in Mongolia. But Rinpoche had articulated his vision for FPMT students to do mani retreats more than a decade ago. This wish led to the inaugural 100 million mani retreat in 2000 at Chenrezig Institute, in Queensland, Australia.

“Rinpoche first mentioned the idea of organizing a retreat at Chenrezig Institute to recite one hundred million OM MANI PADME HUMs in March 1999 during the Vajrasattva retreat at Land of Medicine Buddha in California,” wrote Nicholas Ribush, director of Lama Yeshe Wisdom Archive, in the preface to Teachings from the Mani Retreat, the published collection of teachings given by Rinpoche on December 22-26, 2000, at the retreat.“After mentioning that he would like to organize such retreats in 10 different countries, Rinpoche went on to say, ‘I thought one retreat could happen at Chenrezig Institute in Australia, but I am not sure. It might be difficult. People could recite the mantras individually, but it might not be so easy for them to recite the mantras in a group for a long time.’”

Before the Chenrezig mani retreat began, Rinpoche sent out an invitation to join the retreat. “The benefits of reciting the Compassion Buddha mantra are infinite, like the limitless sky,” Rinpoche wrote. “Even if you don’t have much intellectual understanding of Dharma, even if the only thing you know is OM MANI PADME HUM, still the happiest life is one lived with an attitude free of the eight worldly concerns. If you live your life with that pure attitude free of attachment clinging to this life and spend your life just chanting OM MANI PADME HUM – this six-syllable mantra that is the essence of all Dharma – that’s the purest Dharma.”

On November 26, 2000, FPMT students gathered at Chenrezig Institute to do the first 100 million mani retreat undertaken by FPMT in the West, which was scheduled to end on Losar (February 24, 2001). Rinpoche attended the retreat December 22-26, giving teachings and also observing the retreat to fine tune the schedule and practices. By Losar, 25 million manis had been recited. Knowing that they might not make the 100 million mark, before leaving Chenrezig Institute, Rinpoche extended the retreat to run through Saka Dawa 2001 and gave permission for participants to recite the mantras at home. This led to the birth of Chenrezig Institute’s Home Mani Retreat.

Here’s a short excerpt from Teachings from the Mani Retreat. The excerpt is taken from the teachings given on December 22.

BENEFITS OF THE MANI RETREAT

At the end of the nyung nä text there is an explanation of some of the benefits of reciting Compassion Buddha’s mantra, but otherwise not much of all the extensive benefits has been translated into English.

This is such a wonderful time, especially doing practice to develop compassion and bodhichitta. Without compassion you can’t have the realization of bodhichitta, you can’t enter the Mahayana path, you can’t achieve enlightenment, you can’t achieve the infinite qualities of the holy body, holy speech and holy mind of Buddha. Without great compassion you can’t do perfect work for sentient beings, bringing them to enlightenment. I mentioned this the other night when I arrived, but maybe it was difficult to hear so late at night. …

Those who can make the time should come to the retreat. Even if you cannot come for all three months, you should come for some weeks – or at least for one week. If you do not give yourself the time, the freedom, to do this, it is very poor, very sad. Of course, it would be best to come for the whole time, until the end of the retreat, but if you cannot do that, while you can give yourself the time and the freedom, you should come for one month or for a minimum of one week. You should attempt to do this. If you have a family, of course it’s not possible for all the family members, the whole assembly of parents and children, to come for the mani retreat, but maybe you could take turns. Do whatever you can, whatever days you can do. Give yourself the time to come again and again. Even if you cannot do one week straight, come again and again. Do at least one day, then come another day, then another day. At least come quite often in this way.

We should especially think of death. When the thought of death comes, when we remember death, there’s nothing else that makes sense; everything else is total nonsense. When we think of death, so much of what we do in life doesn’t make sense; it’s all just nonsense. The only thing that makes sense is Dharma practice. Only Dharma will benefit us at the time of death and after death. The only thing that we can carry with us and can enjoy in our future life is Dharma – nothing else.

This is a special means to develop compassion. Intellectual study alone cannot bring you the realization of compassion and bodhichitta. With the intellectual understanding, you then have to purify your mind and collect extensive merit. On the basis of those preliminary practices, you then receive this special deity’s blessings by reciting OM MANI PADME HUM. It is through this that the realizations of great compassion and bodhichitta then come. Reciting OM MANI PADME HUM is one of the most powerful means of developing compassion and bodhichitta. Doing specific meditation on the Buddha of Compassion and reciting the mantra are like soil and water, the conditions that together enable a seed to produce a sprout, or like the pieces that are all put together to enable a clock or watch to show time. The mind works in a similar way. The preliminary practices and the meditation-recitation of Compassion Buddha persuade the Compassion Buddha’s holy mind. Purifying negative karmas, or obstacles, and collecting extensive merit enable us to receive the blessings of Compassion Buddha, and through these blessings we then receive realizations. And the benefits of compassion are as limitless as the sky. After hearing the lam-rim and having studied it and also other teachings, we can understand the benefits of compassion. Compassion has limitless benefits for you and for all other sentient beings.

And I would like to mention something to the Sangha. Because there was intensive study before, of course you need a break. However, unless the Sangha need to go out to give Dharma talks or things like that, they should be the main people here doing the retreat, reciting the 100 million OM MANI PADME HUMs. Apart from those kind of activities, it is not permitted; the Sangha must do the retreat. That is one point that I want to mention. The Sangha must be the main ones to take responsibility for this retreat of 100 million OM MANI PADME HUMs. The Sangha must continue the retreat.

The lay people should also do as much as possible to fulfill this practice. This is the first time such a retreat has been done in the FPMT. I don’t know whether other traditions such as the Kagyü or Nyingma have done such a retreat in the West, but this is the first time it has happened in the Gelugpa tradition. So, take responsibility for the retreat as much as possible.

At the end we will make an offering of this recitation to His Holiness the Dalai Lama, for all his holy wishes to succeed, especially his wish to spread Dharma and, in particular, for the freedom of Tibet. The retreat will also be dedicated for His Holiness to benefit all the people in mainland China by going there and, like the sun rising, bringing peace and happiness and spreading the Dharma. The retreat is not only for one’s own enlightenment, but also for all these other purposes. As I mentioned earlier today at the beginning of the mantra recitation, it is also for world peace.

From Teachings from the Mani Retreat, published by Lama Yeshe Wisdom Archive. Ven. Ailsa Cameron edited the teachings. More resources are available – including eBook and PDF versions of the teachings as well as audio and transcripts – on the Archive’s website.

Part of Lama Zopa Rinpoche’s “Vast Visions” for the FPMT (see Mandala October-December 2010) is for the organization to regularly sponsor and complete 100 million mani retreats. Since 2009, Rinpoche has been sponsoring one nunnery in Nepal to complete this amazing practice. This year, two 100 million mani retreats were sponsored through the Lama Zopa Rinpoche Bodhichitta Fund, a fund which enables Rinpoche’s varied and compassionate service to others to flourish. You can participate and learn more by visiting the Lama Zopa Rinpoche Bodhichitta Fund online.