Key to the Cave

By Joyce Morgan and Conrad Walters 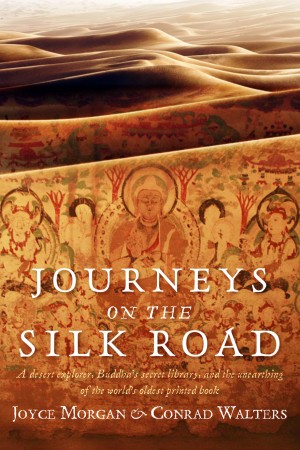 Journeys on the Silk Road: A Desert Explorer, Buddha’s Secret Library, and the Unearthing of the World’s Oldest Printed Book, by journalists Joyce Morgan and Conrad Walters, tells the story of the explorer Aurel Stein’s 1906-8 expedition to Caves of the Thousand Buddhas near Dunhuang, China. Stein and his men traveled along the old silk trade routes, skirting the Taklamakan and Gobi Deserts. They raced to beat other explorers to the old Buddhist grottos where Stein had heard a vast trove of ancient texts had been uncovered in what came to be known as the “Library Cave.”

In this excerpt from chapter 8, Stein and his party are camped next to the caves. Stein’s Chinese-speaking secretary and traveling companion Chiang has befriend Abbot Wang, the self-appointed guardian of the caves who controls access to the cache of ancient scrolls that Stein had been seeking. Wang initially resisted showing the texts to Stein. So Stein hatched a plan to persuade Wang to change his mind. With Chiang interpreting, Stein established that he and Abbot Wang shared a devotion to Xuanzang, the great 7th-century Chinese Buddhist monk and translator who wrote a well known text about his pilgrimage to India and back. Stein knew Xuanzang’s story well. The uneducated Wang was also well versed in Xuanzang’s accomplishments and held him in high regard. Would that shared connection be enough to persuade Wang to let Stein see the cache of scrolls? Stein was left waiting to see whether the cave guardian would reveal the sought-after manuscripts, which Stein hoped to take with him back to England.

Under cover of darkness, a figure quietly crept from the caves to Stein’s tent beneath the fruit trees later that night. It was Chiang, and he was carrying a bundle of manuscripts. Wang, he whispered gleefully to Stein, had just paid him a secret visit. Hidden under the priest’s flowing black robe had been the first of the promised scrolls. What they were, Chiang wasn’t sure. But Stein could see that the paper they were made of was old, at least as old as the roll the helpful young monk had shown him on his first visit to the caves weeks earlier. The writing was Chinese and Chiang thought the documents might be Buddhist scriptures, but he needed time to study them. He returned to his quarters at the feet of the big Buddha and spent the night poring over them.

At daybreak, he was back at Stein’s tent, barely able to contain his excitement. Colophons, or inscriptions, on the rolls showed they were Chinese versions of Buddhist texts brought from India. Moreover, they were copies from translations by the great Xuanzang himself. It was an astonishing coincidence. Even the usually skeptical Chiang suggested that this was a most auspicious omen. Auspicious and convenient. Chiang hastened to Wang to plant the seeds of this “quasi-divine” event. Had not the spirit of Xuanzang revealed the manuscript hoard to Wang ahead of the arrival from distant India of the pilgrim’s devoted “disciple” – Stein? The untutored Wang could not possibly have known the connection these manuscripts had with Xuanzang when he selected them from among the thousands of scrolls and delivered them to Chiang the previous night. Surely this was proof that opening the cave would have Xuanzang’s blessing.

The restored Caves of the Thousand Buddhas, also known as Mogao Caves, near Dunhuang, China. Photo by Yáo Zǐyuān via Wikipedia.

All morning, Stein kept away from Wang and the Library Cave, busying himself with photographing elsewhere. But when Chiang returned a few hours later with news that Wang had unbricked the cave’s door, Stein could wait no longer. No one was about on that hot cloudless day. Even the soldiers who had tailed him all morning had disappeared for an opium-induced siesta as Stein made his way to the cave. There he found a nervous Wang. With Stein beside him, Wang opened the rough door that lay behind the dismantled wall. Stein looked on in wonder: “The sight of the small room disclosed was one to make my eyes open wide. Heaped up in layers, but without any order, there appeared in the dim light of the priest’s little lamp a solid mass of manuscript bundles rising to a height of nearly 10 feet.”

He was looking at one of the great archaeological finds of all time.

There was barely room for two people to stand in the tiny room, about nine feet by nine feet, and certainly no space to unroll or examine the stacked bundles. Much as Stein wanted to remove every scroll from the cramped niche to a large painted temple where he could readily study them, he knew Wang would not agree. Wang feared the consequences if a foreigner was spied examining the contents of the cave he had been ordered to keep sealed. He could lose his position and patrons if rumors spread around the oasis. He was not going to jeopardize all he had worked for. Even in the quietest times, pilgrims occasionally visited the caves to light incense, ring a bell, and pay homage before the Buddha. But the abbot did agree to remove one or two bundles at a time and allow Stein a quick look. He also agreed to let Stein use a small restored cave chapel nearby that had been fitted with a door and paper windows. Screened from prying eyes, Stein set up what he called his “reading room.”

As Wang busied himself inside the Library Cave, Stein looked for any hint of when it had been sealed and a clue therefore to the age of the manuscripts hidden within. Two features drew his attention: a slab of black marble and a mural of bodhisattvas. The three-foot-wide block was originally inside the cave, but Wang had moved it to the passageway outside. It was inscribed to the memory of a monk named Hong Bian with a date corresponding to the middle of the 9th century. This suggested the cave could not have been sealed before then. On the passageway wall were the remains of the mural – a row of saintly bodhisattvas carrying offerings of divine food – that helped conceal the entrance to the Library Cave. Fortunately Wang’s restorations had not extended to these figures. To Stein, hungry for clues, they provided more earthly nourishment. Their style suggested they were painted no later than the 13th century. So somewhere between the 9th century and the 13th, the cave had been filled, then sealed. If his deduction was right, whatever was inside the cave would be very old indeed. 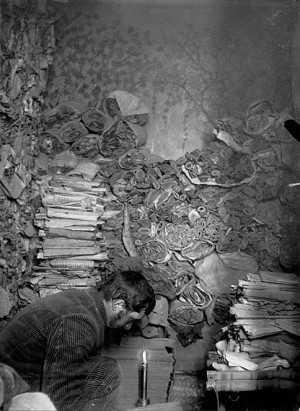 Paul Pelliot, who arrived after Stein at the Caves of the Thousand Buddhas, in the Library Cave, 1908. Photo from Musée Guimet via Wikipedia.

Stein at first believed the cave had been filled in great confusion, and from this he formed a theory about why it was concealed. “There can be little doubt that the fear of some destructive invasion had prompted the act,” he wrote. But he also found evidence for a conflicting theory: that the cave was no more than a storehouse for sacred material. He noted bags carefully packed with fragments of sacred writings and paintings. “Such insignificant relics would certainly not have been collected and sewn up systematically in the commotion of a sudden emergency.”

Scholars agree the cave was plastered shut around the beginning of the 11th century, but the reasons why remain unclear. The cave’s guardians may have feared Islamic invaders from the west. The sword of Islam had already conquered Dunhuang’s ally, Khotan, in 1006. Invaders did come from the north, but these were Tanguts who, as Buddhists themselves, seem an unlikely threat to Buddhist scriptures.

But there is also support for Stein’s other thesis, that the cave was a storeroom or tomb for material no longer needed by local monasteries. The printed Diamond Sutra [the oldest dated printed book, from 868 C.E., which was found in the cave], for example, showed signs of damage and repeated repair and may simply have been judged to have reached the end of its useful life. Buddhists did not simply throw away sacred material. They buried it reverentially. Even today Buddhism has rites surrounding the disposal of spiritual writings.

The cave does not appear to have been sealed ahead of an unrecorded exodus from the sacred complex. Nearby Dunhuang was still a bustling oasis when the cave was hidden. The area had a population of about 20,000, including about 1,000 monks and nuns in more than a dozen monasteries. The caves too were thriving, with some of their most beautiful chapels still to be created. Indeed the caves continued to thrive after the arrival of Genghis Khan in the 13th century. Although the Mongol chief ransacked Dunhuang, he not only left the caves undamaged, his rule saw new ones commissioned. The caves were still flourishing 300 years after the Library Cave was sealed. The last cave is believed to have been painted in 1357, just before the start of the Ming dynasty. Soon after, the Silk Road was abandoned, and the Caves of the Thousand Buddhas sank into a long decline.

Whatever the reason for its sealing, the Library Cave – or Cave 17 as it is prosaically known today – wasn’t always used to house manuscripts. It was initially a memorial chapel for the monk whose name was on the marble slab, Hong Bian, who died around the time the Diamond Sutra was being printed. He was an important monk – so important he had the right to wear the highly prestigious color purple. A statue of him, seated in meditation posture, was initially installed in the cave. It was placed against a wall behind which was painted a decorative scene including two attendants – one holding a staff, the other holding a fan – and a pair of trees from which hang his pilgrim’s bag and water bottle. The statue was removed when the cave was filled with scrolls and has since been found to contain traces of purple silk. When and why the cave changed from being a memorial chapel to housing the scrolls remains a mystery. 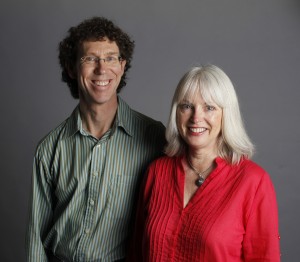 Conrad Walters and Joyce Morgan, authors of “Journeys on the Silk Road”

Among the tens of thousands of priceless texts in the Library Cave was the oldest dated printed book known to exist. The ancient text is a printed copy of the Diamond Sutra (also called the Vajra Cutter Sutra) dated 868 C.E. It was among the several thousand texts Aurel Stein took with him back to England. It is now part of a collection in the British Library.

Reprinted with permission from Journeys on the Silk Road: A Desert Explorer, Buddha’s Secret Library, and the Unearthing of the World’s Oldest Printed Book, by Joyce Morgan and Conrad Walters, published by Lyons Press 2012.

You can learn more about Journeys on the Silk Road and its authors, Australia-based journalists Joyce Morgan and Conrad Walters, at www.journeysonthesilkroad.com.

If you don’t know your own psychology, you might ignore what’s going on in your mind until it breaks down and you go completely crazy.