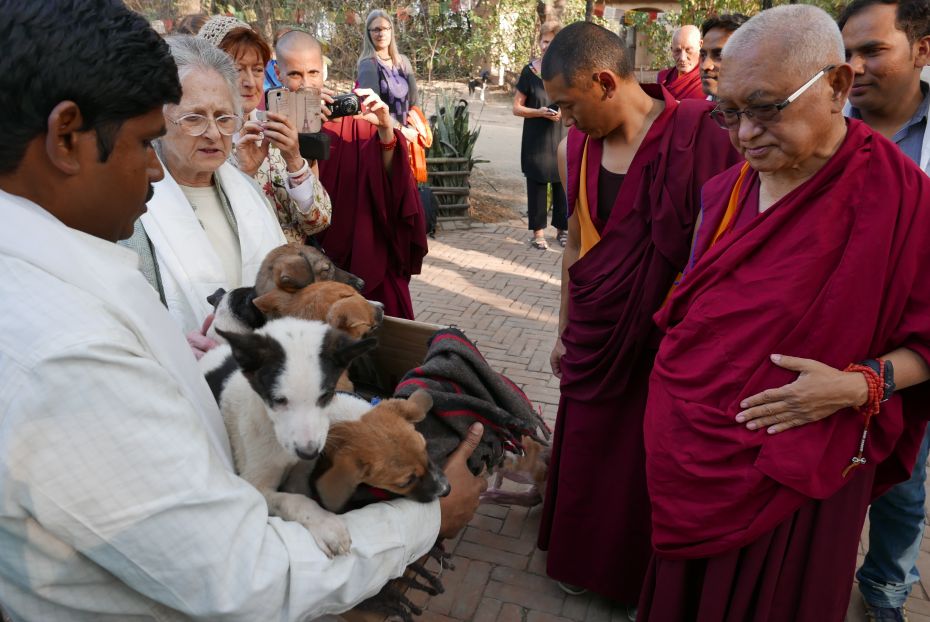 Bodhgaya, India, is the focal point of spiritual pilgrimage and practice. The site of Buddha’s awakening, and home to the Mahabodhi Temple, the region is also a place of incredible poverty. MAITRI Charitable Trust, an FPMT-affiliated project, works in and around Bodhgaya with the singular aim of alleviating as much suffering as possible.

Here, in an extended version of an interview that appears in Mandala January-June 2018, Adriana Ferranti, diector of MAITRI Charitable Trust, shares an overview of the challenges, rewards, and mission of this one-of-a-kind project:

Please share a brief overview of your project and the work it does.

We would like to stress the particular character of MAITRI’s identification and follow-up of cases in the field—it is done by field workers trained in special leprosy training centers, which practically do not exist anymore.

We implement the methodology of the former leprosy program, based on systematic visits to villages on a door to door basis, speaking to people individually and in groups, inviting the identified cases to our clinics or to government health centers as is the case. Each field worker or paramedical worker is assigned an area or sector of several blocks (provinces) and has to live in this area. The district has twenty-four provinces, and they are all divided into sectors. MAITRI was given the responsibility for certain services by the Leprosy District Officer for the entire district.

The work that you do can be considered as being essential in the ‘now’ of responding to the immediate needs of people. What can you tell us about the seeds that you’re planting for the future?

No illusion about legacies. We deal with very old problems in a deeply conservative society.

Any major changes can occur only with the initiative and active involvement of the Indian government and its services. Because of this conviction of mine I decided, from the beginning, to associate/collaborate with programs and schemes set up by the national government. Other activities of ours that can be identified with MAITRI alone are meant to fill in gaps of need destined to be overlooked by any government.

It is our hope that a time will come when such work shall not be required either of MAITRI or any other NGO.

Can you speak of one success story that encapsulates the spirit of your work?

The great success story was the village schools project. We worked out the plan, but the villagers were totally instrumental in the implementation of the idea. They enthusiastically approved our proposal and accepted the responsibilities we imposed on them.

At that time (1998) we could have started many more schools, not just four. The schools grew organically and at one point we had almost 1,200 children regularly attending them.

I have read only of one other similar project in Rajasthan. However, the social workers there had to wait for years for the villagers to accept their ideas. For us it was immediate because of our unfailingly regular leprosy and TB work through the paramedical workers and the mobile clinics, and my presence at most of them for several years. We had earned a reputation of reliability.

How can people become involved, or offer support to your project?

We need help at different levels—volunteering on site or assistance from home by publicizing MAITRI’s work and possibly fundraising.

Mandala is offered as a benefit to supporters of the Friends of FPMT program, which provides funding for the educational, charitable and online work of FPMT.