Land of Joy: The Unforeseen Wonders of Founding a Retreat Center 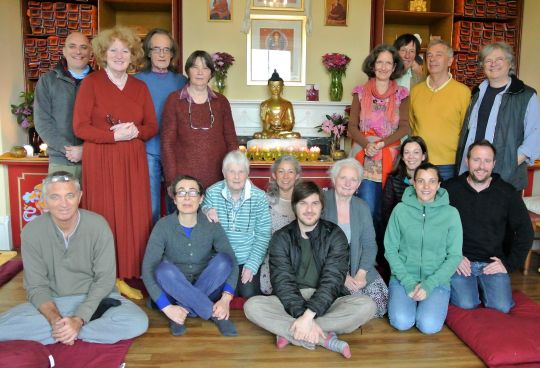 Students from the Land of Joy, UK, 2016. Photo courtesy of Land of Joy.

Longtime FPMT student Andy Wistreich reports on the creation of Land of Joy Retreat Centre in the UK, enthusing, “Creating Land of Joy has been a life-transforming experience for the key people involved. In the process, we have discovered the meaning of guru devotion, merit-making, and service in a deeply personal way. We have engaged at a level normally only experienced in deep meditation practice, even when carrying out apparently ordinary tasks. We have discovered the meaning of our lives through our participation in the project.

“We are not unique. This is experienced by many who undertake major projects in FPMT. There comes a point when you find that the activity has a life of its own, and you are simply part of a flow that you don’t control, yet must give the best mindfulness you can muster.”

Land of Joy has a long history. More than thirty years ago, the leaders of the then major FPMT center in the UK, Manjushri Institute, severed the center’s relationship with FPMT and created the New Kadampa Tradition (NKT), against the advice of His Holiness the Dalai Lama, Lama Yeshe, and Lama Zopa Rinpoche. Since then, the FPMT in the UK has lacked a rural base for deep Dharma practice. The main FPMT center in the UK has been Jamyang Buddhist Centre in London, and establishing a rural retreat center was long part of Jamyang’s strategic plan. In 2008, with support from Lama Zopa Rinpoche, Jamyang’s then director, Sally Barraud, and resident teacher, Geshe Tashi, endorsed a project that led to the establishment of Land of Joy.

The group decided to raise funds first, and then buy a property outright. This took time. A fundraising strategy was developed that emphasized merit-making. Said Andy: “This depended on a sincere faith that many of us didn’t really understand, even though it touched our hearts. That faith grew more meaningful as advice came from Lama Zopa Rinpoche. Three times Rinpoche suggested practices, some to sponsor, and some for us to do ourselves, to generate success. Each time, we carried out Rinpoche’s advice to the smallest detail, and the more we did this, the stronger our faith became. Other merit-making practices were also undertaken. For example, Geshe Tashi suggested offering robes to the main Buddha image in Bodhgaya. As well, in the summer of 2013, a close supporter of the center decided to commission a large Maitreya Buddha statue, with the specific purpose of creating merit to manifest funding for Land of Joy. Around the same time, the target of one million Tara mantras collected from 25 people worldwide was reached. Lama Zopa Rinpoche, Khadro-la (Rangjung Neljorma Khadro Namsel Drönme), and Geshe Tashi added extra support. Then things exploded: a donation of half a million pounds from a single benefactor later became £1m. It was extraordinary!” 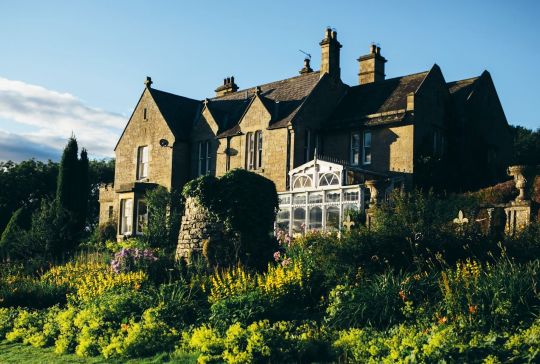 By summer 2014, a property in Northumberland was identified and confirmed by Rinpoche. Prior to purchase, Andy reports, Rinpoche visited the site, known as Greenaugh Hall, blessed it, and recited the Vajra Cutter Sutra. Rinpoche showed great joy. The room where he took lunch on this visit is now the gompa. Andy adds, “It has a deep blessed energy, and people experience a special sense of joy and inclination to meditate just by sitting down there.” The building was purchased, and in the autumn of 2014 and early 2015, all the legal requirements for operation fell into place.

Retreats at Land of Joy are run on a total generosity model whereby retreatants choose their own level of donation. The first season took place in 2015, and the second season has now begun. The board has also agreed on a spiritual policy. It states that there is no hierarchy of level of retreat— each individual follows his or her spiritual development according to personal disposition. At Land of Joy, whether one practices a non-Buddhist path, a Paramitayana path, or a highest yoga tantra path, whether one is a board member, a volunteer, or a retreatant, one is an equal member of the community, and may expect to be treated as such. Everyone working at Land of Joy is a volunteer. Creating a harmonious team is the center’s priority, and recruitment only takes place for key roles when both sides have known each other for several months. Board members are active volunteers too, and they also attend or lead retreats. The experience of volunteering has become a joyous one, Andy affirms. And because merit-making has been so important in the success of the center, in July 2016, Land of Joy held its first Dharma festival, focused on merit-making: the heart of Land of Joy’s activity. 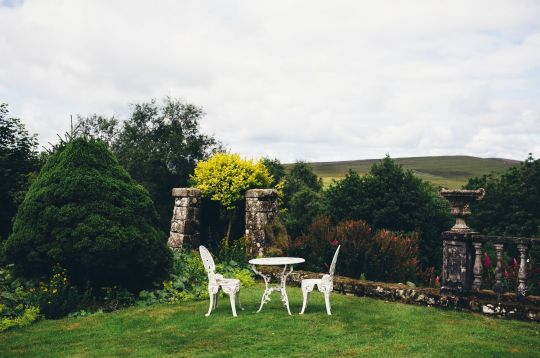 Some of those involved in the establishment and operation of Land of Joy shared their experiences with Andy.

Bob Charlton is treasurer and business manager, and a board member.

The philosophy of really checking Dharma motivation and doing things in a clean, clear way has impacted not only on decision-making at Land of Joy but also in my personal and work life.

Being able to contribute in a project that is part of Lama Zopa Rinpoche’s global vision, that will be of benefit for generations to come.

The emphasis on harmony.

Janet Millar is currently board chair and until recently was acting director.

Our involvement in Land of Joy has given shape to this inner journey and a tangible way of making this manifest. The natural interweaving of spiritual practice and hands-on generosity is a constant inspiration. I have also begun to have a glimpse into the potency of merit-making and devotion and to trust the processes that evolve from these. It has been challenging on many levels for me. I have learned to take time and to watch things develop. We now smile and exchange glances of acknowledgement when we say that we will let things develop organically.

The desire to give other practitioners an opportunity to really mature and transform in their practice. I feel that that is my practice.

It sounds a bit mawkish is say that it is a culture of joy, but it really is. Not necessarily that heightened emotive joy, but the energy of the place is a generous and happy one. We have worked hard to let the generous impulse envelop all the aspects of our interactions. That’s not to say that there haven’t been times of difficulty, and we recognize that there will be in the future, but Dharma thinking has settled into the place. From the greeting of visitors to the care of our retreatants and volunteers, generosity is the motivator and it is felt by the people who come to stay here; briefly or long term. 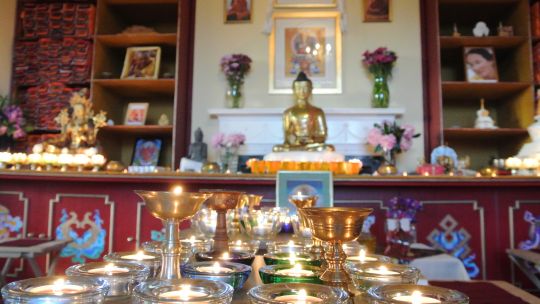 Jason Briggs leads fund-raising and is a board member.

One of the main impacts is that it has finally convinced me that merit exists and behaves in a mysterious way. As a professional fundraiser I was struck by how fundraising for Land of Joy doesn’t seem to follow the normal rules. This doesn’t mean these rules don’t apply at all, just that there is another level of causality beyond normal perception to be considered. Land of Joy has convinced me of the need to perform meritorious acts regularly for special projects like this and also for one’s own personal practice. In this respect it has been a profound teacher.

This means it is dedicated to authenticity, to following established traditions that are proven to work. Its focus is thus on quality, and that’s refreshing, especially at a time when meditation is becoming popular yet being taught by anyone willing to have a go. We need centers that are strongholds for correct understanding, which can be passed on to the generations to come.

Land of Joy therefore has no ambitions to grow large just for the sake of it. Its ambition is to get things right. If that means it stays small forever, then it will remain that way, so long as people are experiencing correct realizations.

Seeing the impact Land of Joy is already having on people’s lives. It has been so moving to see people come to a place where they feel refuge, where they feel safe. The safety is not coming from the place itself, but through the emphasis on quality, which allows the lineage to dwell there, constantly nourishing those that visit. An outward sign of the special connection people are feeling is that individuals are already buying property in the area so as to be close to Land of Joy. It inspires me to think that one day this could be a valley of sincere practitioners supported in their Dharma learning by the center, with retreat huts dotted across the landscape, with Land of Joy bringing peoples’ suffering to an end, as well as giving beginners an inner sigh of relief. 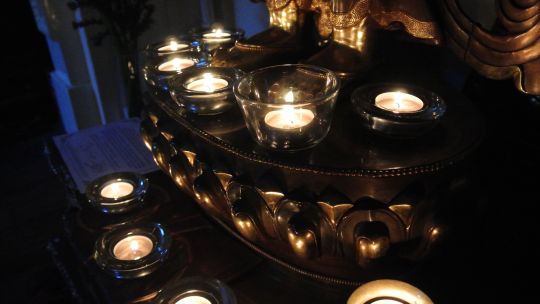 Charlotte Elliott is the secretary and a board member.

I have been given an FPMT family that helps me to grow as a human being trying to practice the Dharma. Like many families, we have our ups and downs, but our mutual commitment to provide a beautiful retreat environment encourages us to offer our best every time, regardless of our differences. We have been able to turn disappointments into successes, failures into achievements, and anger into innovation and new avenues. The generosity, love, and joy that I experience being with my Dharma family is profound, and as I become able to extend the boundaries of my “family,” other people and projects benefit as well.

Jenny MacQueen is the director of Land of Joy as well as a board member.

I get a huge sense of purpose and satisfaction in being part of a team providing the place of peace and renewal that is Land of Joy. Also from serving FPMT, and Lama Zopa Rinpoche especially, as the embodiment of bodhichitta.

Joy, generosity, and community in their broadest senses. So many people giving so much dedication and commitment to making a difference in the world, and doing it wholeheartedly and joyfully, without looking for any reward—except, of course, skies of merit! 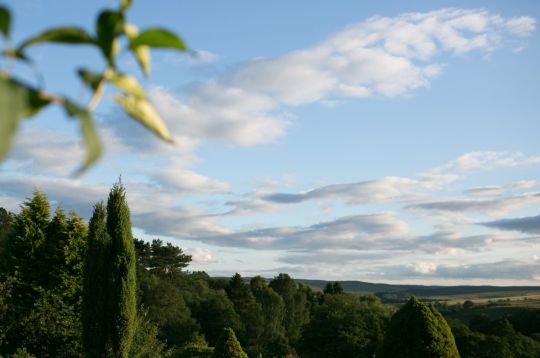 View from Land of Joy. Photo by Fiona Oliver.