The Lies Our Minds Tell Us

Buddha is saying we live in a fantasy world. This world that we think is normal and real, with apples and carpets and flowers and people and dogs, he says, is a complete fantasy world. We’re making reality up and it’s all we’ve ever done. But when everything appears incredibly solid and real, it’s hard to see that it’s all an illusion.

The source of suffering and happiness is in our mind, Buddha’s saying. Mind, consciousness are the words that Buddhism uses to refer to the whole spectrum of our inner experiences: thoughts, intellect, our negative and positive emotions, unconscious, sub-conscious, soul, spirit, all of this.

Not one atom of this mind of ours, this consciousness, is physical. Nor does it come from anyone else — neither your parents (your body comes from the parents; thank you, mother and father!), nor a superior being such as God or Buddha, and nor does it just pop up out of nowhere; we all know that nothing can come from nowhere.

So where does consciousness come from? Where do I come from? According to Buddha, the only other option is that the mind — our thoughts and emotions, our personality and characteristics — come from previous moments of itself. Our mind is a non-physical continuity. When the egg and sperm come together in the mother’s body, what causes them to stay together is the entry of a subtler level of this very consciousness that we call ‘mine’ now. You could therefore almost say that we created ourselves.

The components of the mental consciousness are the subtler levels of mind, which we virtually never access and which only accomplished meditators can access effectively; and the gross level, which is basically made up of a bunch of positive and negative thoughts and emotions. Positive, in Buddhism, means a productive state of mind, beneficial to yourself and others. The negative states of mind, the delusions, are the opposite, bringing suffering to oneself and others. We have to know these deluded states very well as these are the ones we need to get rid of — attachment, anger, jealousy, pride, etc., and the most pervasive delusion of all, ignorance, commonly called ego-grasping. These are the liars. 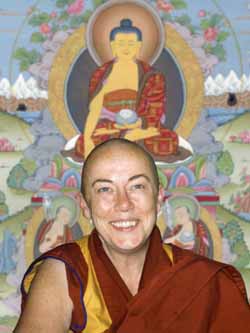 We know ignorance, attachment and anger are painful, but why are they liars?

Ian comes along and punches me in the nose. The mind says, ‘Ian did this, it’s not fair, what did I do to him?’ and we become unhappy, angry, resentful. So where’s the lie? Ian did punch me in the nose, but the fact that Ian harmed me becomes the logical reason for my anger to paint an entire picture of him as ‘horrible, mean Ian.’ We say anger is ’emotion,’ but we never notice the bare bones of it, which is that it’s a series of thoughts. And these thoughts are the liars. They distort the picture I have of Ian as mean and horrible, and it’s a picture that I believe is the objective truth. To say that I made it up — which Buddha says — seems outrageous.

We need to see this particular characteristic of all the deluded emotions: that they exaggerate certain aspects of their particular object. I’m angry with Ian, so my aversion is imposing onto Ian a bunch of qualities that aren’t innately within him. My attachment for someone imposes on that person delicious qualities that aren’t innately there. These delusions paint a broad picture, and the way we believe that this is the reality is the way our minds lie.

This is very hard to see. The basis of this is our clinging to a very strong, real, independent, self-existing ‘I-ness.’ How dare Ian ‘out there,’ harm this ‘me.’ The biggest lie of all is the independent, inherent ‘me-ness,’ or ‘ugly Ian-ness,’ or everything else-ness.

When anger, jealousy, or attachment arise, it is important to understand deeply how they are stories that our mind makes up. When we begin to do this, we’re really doing the job of understanding our minds. Then there’s some logic to want to change this habit. Mostly we have this kind of guilty religious feeling, ‘I shouldn’t be angry, it’s bad.’ We’ll never give it up if we think vague thoughts like that!

Even if we were to say to ourselves, ‘Ian’s not always like that, he’s a kind man,’ we don’t want to believe it and grimly hold on to our view, which is always so extreme. You’re totally in love with a person one week, and six months later they’re your worst enemy. We don’t question, ‘Something’s odd here: I thought he was so gorgeous once, now I think he’s ugly.’ We constantly fall into the trap of believing our own karmic appearances.

Why Ian should punch me in the first place, why he appears ugly to me, why I have anger — the answers are found in karma, the Buddha’s explanation of why things happen. ‘This maniac called Ian punched me in the nose. I haven’t met him before. I’m completely innocent. Then boom! Out of left field comes this punch.’ This is how it appears to us, isn’t it?

Because of past karmic connection with the person who is now labeled ‘Ian,’ we set it up between us to meet again. Not volitionally. He didn’t say, ‘in three and a half lifetimes I’m going to meet Robina and punch her in the nose,’ no way. The quality of our past relationship will be expressed in the present relationship: clearly, we weren’t very kind to each other. I’d harmed him, he was furious and retained that anger and hurt in his mind, those seeds remained in his consciousness, and then bumping into the consciousness now called Robina, they ripen as fury and outrage, and I get punched. And of course I then punch back. This is samsara.

Ven. Robina Courtin is an Australian-born Tibetan Buddhist nun who is director of the Liberation Prison Project and has an intense program of worldwide teaching engagements. The Lies Our Minds Tell Us is an abridged version of a teaching Ven. Robina gave at Langri Tangpa Centre, Brisbane in October 1998.

You can read the rest of this article in the September issue of Mandala.