Join the Cast of Thousands 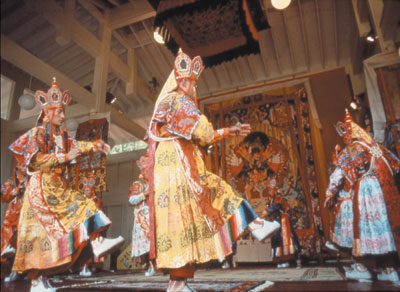 One of the most significant events in the Buddhist calendar will take place in January 2006. His Holiness the Dalai Lama will confer the Kalachakra empowerment or initiation on thousands of people at Amaravati in South India – where the historical Buddha Shakyamuni is said to have first revealed the Kalachakra. This will be the thirtieth time His Holiness has conferred the empowerment in his present lifetime.

The Dalai Lamas have had a strong interest in Kalachakra over the centuries and carry on the initiation lineage of the Gelug tradition. All the main traditions of Tibetan Buddhism practice Kalachakra. In particular, the Jonang tradition has an important lineage of completion stage practice.

Kalachakra means “wheel of time.” This refers to both the Inner Wheel of Time – the movement of our breath and the various changes that take place within our own body and mind; and the Outer Wheel of Time – the movement of the planets and the other bodies that make up this universe. The significance of the Kalachakra lies in its purification or positive transformation of both these inner and outer processes of change: our inner mental and physical changes as well as the outer changes that occur in our world.*

The extraordinary opportunity for every one of us to be there to receive this empowerment, in a cast of thousands, cannot be underestimated. Its primary goal is to foster world peace – and to create the causes for those who receive it to meet the Kalachakra teachings again when they re-emerge with the triumph of Shambhala, forecast to be in the year 2424 c.e.**, when a new golden age will follow.

In January 2002 at a Kalachakra empowerment in Bodhgaya, India, Jhado Rinpoche commented that “… when we hear the word ‘highest tantric yoga,’ immediately our eyes light up, we get very interested, because many people have the misconception associating the highest yoga tantra with unrestrained behavior, such as drinking intoxicants and unrestrained physical relationships and so forth, claiming this to be highest yogic practices. This is entirely wrong…. The highest yoga tantra is the most profound path in the sense that it has a system explaining the physical constituents, the energy winds, the channels, as well as the elements within them. One attempts to stop the gross winds and mind, one attempts to activate the extremely subtle wind and mind, and on the basis of that, one meditates on emptiness and the divine form of the deity and achieves the indivisible holy body and mind of the Buddha.”

Conferring the Kalachakra empowerment is a complex ceremony. Disciples should have experience of the three principal aspects of the Mahayana path: renunciation of samsara, bodhichitta, and an understanding of emptiness. If the disciple has not actually experienced these, he or she should at least have an intellectual familiarity with them and admiration for them.

There are eleven different empowerments within the main one: seven of “entering like a child,” three “exalted,” and one “most exalted.” Disciples who are temporarily intent on just the worldly siddhis (magical or mystical accomplishments) are given only the seven lower empowerments. Those who are mainly interested in the transcendental siddhi of buddhahood are given all eleven empowerments.*** The ceremony takes place over several days.

This issue of Mandala contains a full 17 pages of information about the Kalachakra. To buy a copy, contact Catherine@fpmt.org

** There is a prediction in the Kalachakra that there will be a great invasion and a great war in the future. This war will take place in 2424. This is not the type of war that will destroy the planet, but it will probably be a pretty bad war. But at that time, the King of Shambhala will come as the good guy; the bad guys lose and the so-called Golden Age is established. From Introduction to Kalachakra, commentary by Dr. Alex Berzin June 28 – 30, 1985 at Institut Vajra Yogini, France.

*** From “An Introduction to the Kalachakra” by Geshe Wangdrak (Losang Tenzin) of Namgyal Monastery.