Land of Joy: An Interview with Andy Wistreich 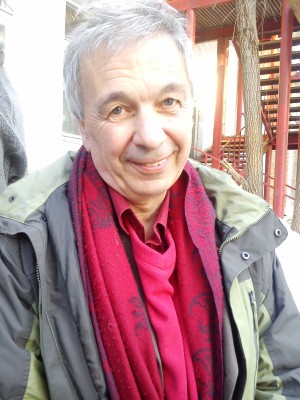 Land of Joy, a retreat community project in the United Kingdom, is currently in its preliminary stages. Thomas Warrior, a Land of Joy team member, interviewed project coordinator Andy Wistreich, a long-time student and FPMT registered teacher with a strong interest in retreat, about how the plans for the center developed and are coming along.

Thomas: How did the vision for a Land of Joy come about? Who is involved?

Andy: In 2007 and 2008 during a couple of five-month retreats – one in O.Sel.Ling Centro de Retiros in Spain and one in Tushita Meditation Centre in India – I was overwhelmed to discover the importance of the staff in supporting a retreat. I realized that the staff cultures in both those centers, though not perfect, were sincerely rooted in pure Dharma motivation and understanding. Moreover, I realized that this was because of being FPMT centers pervaded by the influence of Lama Zopa Rinpoche. Maybe these were the main realizations of my retreats! They led me to wish for an FPMT retreat center in the UK, and so the vision for the project began with an experience of being supported with loving care while in retreat.

Because I wrote to Rinpoche the day after my second retreat ended, and my letter included a proposal to establish a retreat center in the UK, and he willingly agreed, he was involved from the outset. Next came support from the director (then Sally Baraud) and resident teacher Geshe Tashi at Jamyang Buddhist Centre London. Their center already had a strategic goal to create a retreat center, and I didn’t want to duplicate their effort. They both thought it better to set up a separate project for a new center. Since then, more and more people have become involved, and we now have a circulation of around 200 for our newsletter, a board of 13 members, a group of dedicated staff, and several supporters making large and small donations.

Thomas: What are the benefits of having a retreat community in the UK?


Andy: The benefits of having a retreat center are that through it people can develop realizations based on great compassion and a correct understanding of reality. The community aspect came about because it is understood that having a community living at the center or nearby, who provide a foundation of spiritual energy that continues all year round, and who integrate gradually with the local community, will ensure that Land of Joy is nurtured by experienced and grounded practitioners. By demonstrating the synergy of the realizations gained in retreat with the nourishment that comes from living in an ethical sustainable community, Land of Joy will become a positive symbol in the world at large. The UK already has a few such places rooted in other traditions. Land of Joy will provide a retreat community rooted in the tradition of Je Rinpoche [Lama Tsongkhapa], Lama Yeshe and Lama Zopa Rinpoche. We know from a survey we conducted at the very beginning of the project that there is already a very strong demand and felt need for this in the UK.

Thomas: How much funds are needed to realize the project and how will they be raised?

Andy: The initial funding target is for £1 million (US$1.5 millon) of which we already have just over 12 percent. This will enable us to purchase a property, and will make it easier to raise the funds for the full development of the center. Altogether we need a further £1.5 million (US$2.3 million), we expect to raise this bit by bit based on our supporters seeing how Land of Joy evolves once it begins its program. We are now into our capital appeal and we have created three small teams for fundraising purposes. The first is researching and then building relationships with potential major donors and trusts; the second is seeking legacies; the third is raising smaller regular donations from our supporters. The main funds, especially for the first target, have to come from major donors. The legacies will bring much-needed development capital over the years, while the small regular donations accumulate to create a sustaining base of continuous revenue to underpin the costs of the center.

Thomas: Why is the center called “Land of Joy”?

Andy: “Land of Joy” means a place of pure joy. Since joy is a mental phenomenon, this refers to something the mind develops. Immeasurable joy is the wish for all beings to experience the joy that knows no suffering. “The Joyous” is the name given to the first level of the bodhisattva’s path of meditation, where the perfection of generosity comes to fruition. One reason it has the name “The Joyous” is because it follows the initial experience of the direct realization of emptiness on the path of seeing, and at this point in the path one has the extraordinary joy of knowing profoundly that liberation for oneself and others is an actual possibility.

According to Geshe Tashi, the name could refer to the joy of the realizations that meditators will experience at Land of Joy. This concurs with Lama Zopa Rinpoche’s message that simply finding a good place is not the point of Land of Joy – the purpose is the correct realizations that will happen there. The emphasis on “correct” probably means the profound understanding of emptiness, according to the unmistaken teachings of Je Rinpoche.

“Land of Joy” is a way to translate the Tibetan “Ganden” and Sanskrit “Tushita.” This refers to the pure land of Maitreya Buddha whose name signifies the quintessence of loving kindness. This is the abode also of Je Tsongkhapa and Lama Atisha, so Land of Joy has a deep connection with these three holy beings. Je Rinpoche named his first monastery in Tibet, Land of Joy (Ganden), and Lama Yeshe named his first retreat center in India, Land of Joy (Tushita). So the name is extremely auspicious.

Thomas: Where in the UK will the retreat community be established?

Andy: The retreat community will be established somewhere on the British mainland, with a maximum of a day’s journey from either London or Leeds. It must be in a calm place of natural beauty, hopefully with inspiring views, and pleasant walks in the area. There will be good rail links, a hospital and other services within easy reach and a local planning authority that is not opposed to the project. The land will probably comprise a minimum of 50 acres though much more would be preferable. There needs to be appropriate locations on the land for a) the group retreat facilities, central administration and staff accommodation buildings, b) up to 12 solitary retreat huts in a very quiet place, c) up to 20 dwellings for contemplative community residents, d) a small building for the Tara Hospice Care service, e) a monastery, and f) a nunnery. Some of these need to be separated from other facilities, hence the need for a large piece of land. Even though some of these won’t be established at the beginning, we need to be sure that the potential for them exists there.

Thomas: What elements will be incorporated into the retreat community?

Andy: The core elements of Land of Joy will be the group retreat and conference facilities, the solitary retreat huts, the contemplative community, the Tara Hospice Care service and a monastic community. There will be an organic market garden and orchard providing as much as possible of the food consumed at Land of Joy, sustainable energy generating plant and a library. Group retreats, conferences and courses will be provided by both the center and by partner organizations on a hire-out basis. The contemplative community will be for adults of all ages who wish to lead a semi-retreat lifestyle based on Buddhist refuge. Members of this community will link up with other community members living nearby the center for a range of Dharma activities such as meditations, discussion groups and pujas. It is anticipated that they will also help to provide a program of Buddhist and related courses, groups and activities for people living in the area. The Tara Hospice Care service will start out by training volunteers to give non-medical end-of-life support in the local community. In due course, it is hoped to develop a small hospice at Land of Joy providing for one or two resident patients. The monastic community will begin with either a monastery or nunnery for a small number of ordained Sangha residents. In due course we hope to establish both at Land of Joy.

Thomas: Will Land of Joy only be for Buddhists?

Andy: Land of Joy will welcome people of all faiths and none, who are interested in the benefits of retreat. The program of retreats offered by Land of Joy will reflect a very diverse range of needs and preferences. There is no reason why retreats led by members of non-Buddhist faiths may not take place there as partner programs. It is intended to offer a range of Universal Education activities and retreats for various groups. There will be activities for youth, families and other special interest groups. There will be programs of secular retreats on either mindfulness or compassion training. At the heart of the program will be traditional Buddhist retreats in the FPMT tradition, covering a diverse range of Sutrayana and Vajrayana practices, and including regular visits by high lamas giving Vajrayana empowerments and teachings. Land of Joy will be a place of learning and contemplation for everyone.

Thomas: Are there any guidance and/or endorsements from lamas, teachers and guides?

Andy: The very positive endorsement for Land of Joy given by His Holiness the Dalai Lama on May 11, 2012, is available from the home page of our website. Lama Zopa Rinpoche and Geshe Tashi Tsering have both given very appreciative support and advice from the start of the project. Khadro-la [Rangjung Neljorma Khadro Namsel Drönme] has offered advice and support and has committed to visiting Land of Joy regularly once it is established. Much of the advice received has been about meritorious practices that will help create the causes for Land of Joy to manifest. Khadro-la stated that a firm financial foundation, not mixing worldly (such as commercial) motivations with the Dharma motivation, and understanding that the teacher is the most important person at the center, are all necessary. Lama Zopa Rinpoche’s advice is to remember that the correct realizations of retreatants are the over-riding purpose. Also he has given us two special mantras to create the causes for Land of Joy. Geshe Tashi’s advice in a video interview is also available.

Thomas: How can one get involved and what practices could one do to help the realization of the project?

Andy: Once Land of Joy manifests physically, there will be many kinds of voluntary help needed. For now the emphasis is on fundraising, so the primary cause is to create positive potential for the funds to be given. At present we have a one million Tara mantra campaign underway to which supporters are encouraged to contribute. Furthermore there are various special practices recommended by Kyabje Zopa Rinpoche. Financial support is especially welcome, in the form of single or regular donations, and legacies, however large or small.

You can learn more by visiting Land of Joy’s website.

Andy, now 63, has been an FPMT student and practitioner since 1980. He has lived in England all his life. He is married to Shan Tate. In the 1980s, she was director and he was SPC at Manjushri London (now Jamyang). They started the Saraswati Study Group together in 1991. They have four children, all grown up. Until 2007 Andy worked full-time in education. Since retiring, he has focused on Dharma. He has been project coordinator for Land of Joy since its inception in 2008.