RELATIONSHIP WITH THE TEACHER 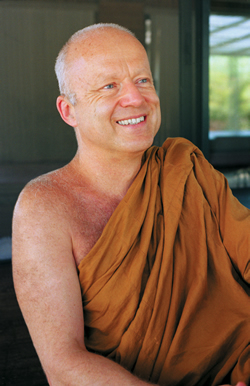 In Theravada, the relationship between teacher and student is like that between a master craftsman and his apprentice. The Dharma is a skill, like carpentry, archery, or cooking. The duty of the teacher is to pass on the skill not only by word and example, but also by creating situations to foster the ingenuity and powers of observance the student will need in order to become skillful. The duty of the student is to choose a reliable master, someone whose skills are solid and whose intentions can be trusted, and to be as observant as possible. After all, there’s no way you can become a skilled craftsman by passively watching the master or by merely obeying his words. You can’t abdicate responsibility for your own actions. You have to pay attention both to your actions and to their results, at the same time using your ingenuity and discernment to correct mistakes and overcome obstacles as they arise. This requires that you combine respect for your teacher with respect for the principle of cause and effect as it plays out in your own thoughts, words, and deeds.

Shortly before my ordination, my teacher Ajaan Fuang Jotiko told me: “If you want to learn, you’ll have to think like a thief and figure out how to steal your knowledge.” And soon I learned what he meant. During my first years with him, he had no one to attend to his needs: cleaning his hut, boiling the water for his bath, looking after him when he was sick, etc. So, even though I was a foreigner – barely fluent in Thai and probably the most uncouth barbarian he had ever met – I quickly took on the role of his attendant. Instead of explaining where things should be placed or when certain duties should be done, he left it up to me to observe for myself. If I caught on, he wouldn’t say anything. If I didn’t, he’d give me a dressing down but still wouldn’t fully explain what was wrong. I had to observe for myself: Where did he place things when he straightened out his hut? And I had to do this out of the corner of my eye, for if I was too obvious in watching him, he would chase me away. As he said, “If I have to explain everything, you’ll get used to having things handed to you on a platter. And then what will you do when problems come up in your meditation and you don’t have any experience in figuring things out and experimenting on your own?” …