The Dalai Lama Completes His Studies 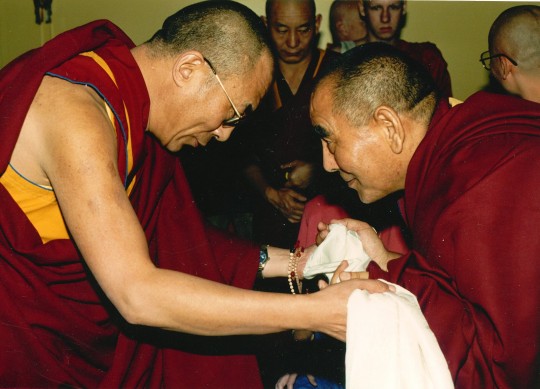 His Holiness the Dalai Lama with Geshe Lhundub Sopa in 1989. Photo by Kalleen Mortensen.

Geshe Lhundub Sopa has led an extraordinary life by any measure. Born in 1923 in Tsang, Tibet, to farmers, he eventually became an accomplished scholar at Sera Je Monastery in Lhasa, where he taught Lama Yeshe. He witnessed firsthand the shifting political tides as Chinese Communist forces bared down on Tibet, eventually fleeing into exile in 1959. In the early 1960s, he went to the United States and joined the faculty of the University of Wisconsin in 1967. In time, Geshe Sopa became a full professor and trained many prominent scholars of Tibetan Buddhism. At the same time, he continued to serve as a teacher for important Tibetan teachers, including Lama Zopa Rinpoche and Yangsi Rinpoche. He established Deer Park Buddhist Center in Oregon, Wisconsin, which hosted the first Kalachakra initiation given by His Holiness the Dalai Lama in the West in 1981. Geshe Sopa, now retired, continues to publish scholarly works on Tibetan Buddhism.

Like a Waking Dream is Geshe Sopa’s autobiography, published by Wisdom Publication and edited by Paul Donnelly, one of Geshe Sopa’s students. In the book, Geshe-la shares detailed memories of his youth and early days in the Tibetan monastic system, giving valuable insight into a now-vanished world. He offers a unique and heartfelt perspective on exile and establishing Tibetan Buddhism in the West. We’re happy to be able to offer you a short excerpt from Geshe-la’s autobiography in Mandala.

Though His Holiness had already taken leadership of Tibet by the end of 1950, he didn’t take his geshe examination until 1959. Shortly afterward, things got much worse, and His Holiness fled to India. Interestingly, everything came to a head right after His Holiness finished his education.

… At the time of his geshe examination, the Dalai Lama had to go to each of the Three Seats: first Drepung, then Sera and then Ganden.

… On the day of the debate, all the great scholars from the Three Seats were there, as were government officials, the abbots of Sera, Drepung and Ganden, the tsenshaps [His Holiness’ debate teachers and partners], and His Holiness’ two tutors. And there I was, debating in front of all these people. I asked His Holiness questions, and he had to respond. It was not easy. There is some film footage of this session at the Khyamra. I can be seen debating His Holiness, though my face is not shown. The camera was behind me facing His Holiness, so you can only see me from the back. You can’t tell that it is me, but I remember it, and I can recognize myself. It was just coincidence that I was the one who got filmed.