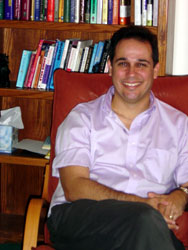 I recently found myself sitting in the office where I work as a psychologist, worrying about my own sanity. I was not worrying that I’d become insane but rather that I was overly sane. When I caught myself thinking about how I wasn’t crazy enough, I thought, “That’s nuts,” which naturally made me feel a bit better.

Among Western psychotherapists, there’s been a long debate about the value of a “healthy ego” for those striving to practice the Dharma. One of the functions of the ego is to help us to fit into society – to be well adjusted to the world around us. Freud explained that the ego’s job is to modulate our powerful, instinctual impulses, helping us to meet as many of our desires as we can while also not harming others, not breaking the rules of our society, and perhaps contributing something to those around us. From an ego-centered perspective, mental health could be described as fulfilling as many of your own desires as possible while also finding your place in society, not harming others around you, and perhaps helping others also to fulfill their desires. The ego lives in the realm of desire.

Now, having a healthy ego that allows us to adjust to society is clearly better than simply allowing our negative, instinctual impulses to be continually acted out. For those of us whose instincts naturally tend toward desire, aversion, and the like, it’s the ego that stops us from stealing the things we want or striking out against those who annoy us.

As a psychologist, I often work with people who experience terrible suffering because they lack the ability to manage their negative impulses effectively. While someone with a healthy human ego will eat right, invest intelligently, compromise reasonably with her spouse, and develop healthy habits for using free time, those with difficulty managing negative, instinctual impulses (who lack what psychologists call “healthy ego defenses”) may eat and/or diet compulsively, hoard their money or spend impulsively, retreat in fear or become enraged when in a disagreement, and develop unhealthy or obsessive habits. Without the ability to effectively manage our impulses, we may often find ourselves overwhelmed, confused, trapped, in conflict with others, and caught in self-destructive patterns. On the other hand, the healthy ego leads one to be reasonable, well adjusted, and effective in a society of other desire-driven egos…

I hope that you understand what the word ‘spiritual’ really means. It means to search for – to investigate – the true nature of the mind. There’s nothing spiritual outside. My rosary isn’t spiritual; my robes aren’t spiritual. Spiritual means the mind and spiritual people are those who seek its nature.