A Day in the Life in Mongolia 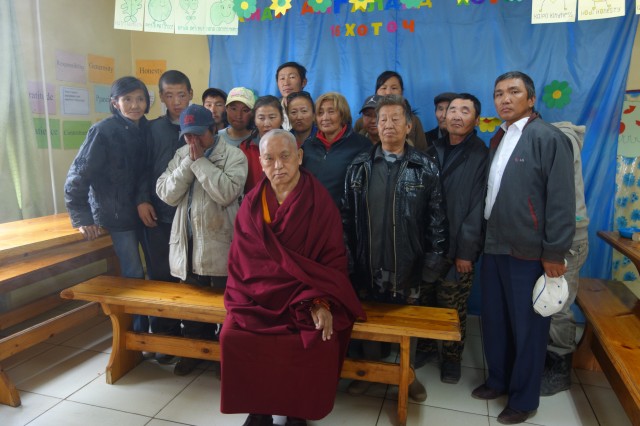 Conditions are very difficult for the poor living in Mongolia, especially given the long, cold winters. The Lamp of the Path NGO, part of FPMT Mongolia, offers social services to some of the poor and homeless living in Ulaanbaatar, Mongolia. It has three main programs: a soup kitchen, which offers about 80 meals five days a week; a health clinic, which offers free health services to the very poor; and a tailors’ cooperative, which helps single mothers earn a living and to become financially self-sufficient. FPMT Mongolia also has started an alcohol treatment program in cooperation with the Ulaanbaatar Police Department.

Massimo Corona lived in Ulaanbaatar 2011-12 and witnessed first-hand the excruciating circumstances that some of the people who come to Lamp of the Path experience. He shared with Mandala one heartbreaking story.

On a very cold winter day (-30° C [-22° F]) in 2011, I went to visit the Lamp of the Path (LOP) NGO Soup Kitchen to film the activity there for a fundraising appeal. Every day LOP offers free soup for lunch to the homeless and destitute of that district of Ulaanbaatar, the capital city of Mongolia.

I wanted to start where these people lived. We began at a manhole leading to central heating pipes, which created a warm space underground. A young lady came out first. She had severe burns on her legs from the heating pipes which are being treated by LOP’s doctor. Then a totally blind man came out. He walks alone everyday to the soup kitchen from the manhole, about two kilometers (one mile). I looked inside and what I saw was only a bed of straw. Everything else was covered in black soot.

Then we went to the basement of a house under construction. The cold there was really unbearable. A homeless couple was living there, in the frigid darkness. It was so cold that the blankets were frozen solid. 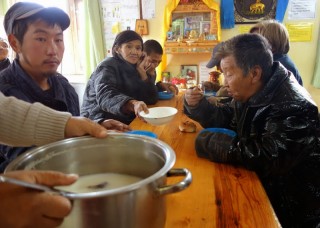 The Soup Kitchen at Lamp of the Path, Ulaanbaatar, Mongolia, September 3, 2013. Photo by Ven. Roger Kunsang.

An hour later I found all of them in the dining room of the soup kitchen, eating their warm soup with fresh bread. Some of them grabbed the leftover bread rolls and stuck them in their pockets, maybe for their dinner. There were about 40 or 50 homeless people in the well heated room, eating their meal while a recording of Lama Zopa Rinpoche reciting a sutra was playing in the background. It was a moving scene.

A week later I came to find out that, one day earlier, the couple living in the basement had gone to visit their friends living underground near the heating pipes. They told me that someone passing by threw a cigarette butt in the manhole, the straw caught fire, and the man died on the spot. The woman was severely burned, but survived. She stayed there near her husband’s corpse for a whole day, without calling for help, because she was afraid that the police would arrest her. Eventually, the LOP doctor went to the manhole and had found her there.

Long-time student Massimo Corona has served FPMT in various capacities sine the 1970s, including as director of FPMT International Office from 2000 to 2006. More recently, he served as director of Ganden Do Ngag Shedrup Ling in Ulaanbaatar from July 2011 to September 2012.

Established in 2005, Lamp of the Path NGO organizes the social welfare activities of FPMT Mongolia. You can find out more and offer your support on FPMT Mongolia’s website.

In Buddhism, we are not particularly interested in the quest for intellectual knowledge alone. We are much more interested in understanding what’s happening here and now, in comprehending our present experience, what we are at this very moment, our fundamental nature.