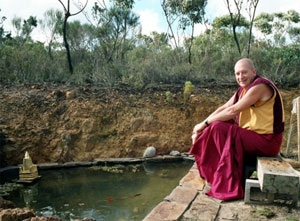 Ven. Thubten Gyatso (Adrian Feldmann) completed a three-year retreat at De-Tong Ling Retreat Centre on Kangaroo Island off the South Australian coast this past November. The retreat (starting at 62, an age when many people are retired or thinking of retiring), was the culmination of years of serving his gurus. In this interview with Owen Cole of Hayagriva Buddhist Center in Western Australia, Ven. Gyatso describes the retreat as the most powerful experience in his thirty-three years as a Buddhist monk.

Ven. Gyatso: I made this decision to do the retreat when I was ordained thirty-three years ago and had been waiting for Lama Zopa Rinpoche to give me the green light. In 1998, out of the blue, Rinpoche said, “In five years time you can start your three-year retreat.” In 2002 I reminded him of what he had said and, lo and behold, after more intense preliminary practices such as reciting the Arya Sanghatasutra 500 times, making 60,000 tsa-tsas and doing another Vajrasattva retreat, I started the retreat in 2005.

Owen: What were the benefits of this retreat?

Ven. Gyatso: A healthier body and mind. Unshakeable confidence in the truth of Dharma and vast gratitude to Lama Thubten Yeshe, Lama Zopa Rinpoche and all my other lamas for their kindness, patience and wisdom in directing me away from the lower realms and towards the unimaginably wonderful goals of the path.

Also, being cast into the role of teacher so early in my Dharma growth I have always felt somewhat uneasy about my parrot-like repetition of words that I have heard from others or read in books. Now, even though I had no realizational breakthroughs during retreat, I feel that I can talk about Dharma from my heart, with sincerity from my own experience. This is what I had hoped for.

Also, seeing the shortcomings of selfishness, it is clear that the only reliable source of happiness is unbiased love for others in every situation, even when one is hated and rejected.

Owen: Did the retreat meet your expectations?

Ven. Gyatso: I tried hard not to have any expectations. Such things are hindrances to meditation, although it did occur to me that it would be nice to be able to save the rip-off fare of the ferry by walking back to the mainland.

Ven. Gyatso: The retreat actually began four months before the three years started when I completed recitation of the Arya Sanghatasutra and the Vajrasattva retreat. This placed my mind in a state of peace and happiness that remained and was enhanced throughout the main retreat. Of course there were the usual emotional ups and downs, but these were as natural as waking and sleeping and did not disturb the inner happiness.

According to instructions from my lama, Lama Zopa Rinpoche, the first eighteen months were spent doing the sadhana for four sessions a day and mostly analytical meditation on lam-rim rather than mantra recitation. During that time I read many lam-rim teachings, especially those of Geshe Sopa Rinpoche, which were delightful.

For the next fifteen months, I tried to gain single-pointed concentration on the self-generation. There are nine stages of mental development towards this goal. I didn’t get to the second stage.

The final three months were spent reciting the Sutra of Golden Light daily, doing the Lama Chöpa Jorchö practice extensively and devouring books from the De-Tong Ling library. I read most of His Holiness’ books and Alan Wallace’s on physics and Dharma, the comparison of Dharma and science being of particular interest to me.

For most of the retreat I went to bed at about 10:00 p.m. and woke at 3:00 a.m. Five hours sleep is all one needs in that situation. I could have even shortened it but was too lazy.

I saw nobody during retreat apart from a dentist at eighteen months to remove a wayward tooth. Then, after two-and-a-half years, six police appeared at the door and gave me ten minutes to evacuate. Just because white ash was raining down on the cabin and smoke was everywhere from a bushfire! The night sky had been lit up for a week – the island was burning down. They said it was compulsory to go so I accepted my karma and evacuated with two other retreaters. The good thing about it was that I scored a giant pizza in the nearby town, Kingscote.

Owen: What sort of obstacles came up?

Ven. Gyatso: Osama bin Possum, the garden terrorist, was the main obstacle to equanimity, quickly followed by the parrots (vandals at heart), and then the ants. All the ants on Kangaroo Island were red Indians in their past lives and now they think my kitchen is the happy hunting ground. Just joking, of course! The main obstacle was my mind, believe it or not.

The lamas are not kidding when they point out that, after laziness, mental wandering and dullness are the big enemies to concentration. So damned hard to subdue those thoughts! One’s whole life is replayed over and over again – which made me think it’s better to do three-year retreat when one is much younger, then there won’t be so many memories intruding. But perhaps this is the main benefit: it’s like an extensive psychotherapy with the manifestation of one’s forgotten memories proving the truth of Dharma and with the Dharma acting as the therapist explaining the memories and their associated emotions.

Owen: How does it compare with other retreats?

Ven. Gyatso: All retreat is important, but a decent retreat really can’t be shorter than three months. The general experience was not so different to past retreats, perhaps my very first three-month retreat, also alone in the Oz bush, had more impact because it was then that I deeply realized the truth of lam-rim and decided to become a monk. Big decision, how fortunate I was to make it.

Owen: Spiritually, how does it compare to work you have done for Dharma?

Ven. Gyatso: The most important work I have done for the Dharma is being a monk and maintaining my vows. This retreat was my most powerful experience in Dharma.

In terms of personal evolution, having begun to subdue the mind through living in the vows of a monk, having gained some knowledge of listening to and thinking about the teachings, and having followed the lama’s advice on purification and accumulating merit, retreat is the next step towards gaining the wisdom of meditation, the most importa nt step in the path.

Owen: How quickly did the time pass? 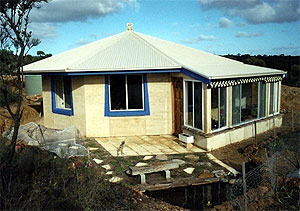 Ven. Gyatso: Time was of no consequence. I strictly maintained my schedule, never missed a session (apart from the tooth and the pizza) and was running between sessions to do all that had to be done, like washing, cleaning, cooking, cutting firewood, clearing bush (fire prevention) and gardening. Yes, I had a garden and three fish ponds, a distraction I knew, but it was good for the mind and I hope will please others who use my cabin. So, with all the running around, the thirty-six months zipped by very rapidly. I was never bored, never hoping for time to pass, always delighting in every moment. Even though it couldn’t concentrate, the mind experienced inner peace and happiness during the entire retreat.

Owen: What is it like adjusting after the retreat?

Ven. Gyatso: My mind is acutely sensitive to both the sense world and to people’s emotions. From cars to clothes and hairstyles, everything has changed. Obesity is terribly obvious, especially in children, and people are enslaved by sensory entertainment. Cell phones and the ear plugs from new-fangled machines called “iPods” are universal ear adornments. I think people are avoiding facing up to their own minds. Silence is so joyful, but it is seen to be threatening; the waves of thoughts and emotions are too much to handle. I feel sorry for the world. The frenzy of activity around me is so pointless, it has no real purpose other than to distract from what is important. There is such an air of sadness.

After previous retreats I found talking to be quite strange. It required re-education of the tongue to formulate words and having a purpose for speaking. I’ve had no such difficulty this time. I want to communicate with others. Conversation is usually meaningless gossip. I have no need for superficial talk, but most people appreciate the opportunity to talk about themselves. They relax when they know they are being listened to, and it is possible to offer a skillful word now and then. Meditation retreat gives deep insight into one’s own mind, warts and all. Actual experiences are only discussed with one’s teacher but, as we all share the same psychological processes, retreat makes it easy to understand where people are coming from and how to help them. This is the proper role for Buddhist monks and nuns in society. Lay people help them materially and they help lay people get their lives and minds together. Meditation retreat is not running away from society – it is done for society.

Owen: The international financial crisis was at its peak just after you came out of retreat. How do you view something like that after such an intense involvement in the Dharma?

Ven. Gyatso: Like death or any other suffering I see it as a result of the three poisons, mainly greed. Confronted with it after retreat I find myself wishing more people could understand and practice Dharma. I know people live in different circumstances to mine but, like the consumption of energy where the best solution is to stop unnecessarily burning it up, it would be good if people stopped unnecessary spending.

Owen: What are the best preparations for retreat?

Ven. Gyatso: Total devotion to a guru who will tell you when or if you are to do it, purification and accumulation of merit. Find a place like De-Tong Ling which is well managed for long retreats. Kimball Cuddihy, the center director, and his helpers were absolutely wonderful.

Owen: Where to from here?

In Buddhism, we are not particularly interested in the quest for intellectual knowledge alone. We are much more interested in understanding what’s happening here and now, in comprehending our present experience, what we are at this very moment, our fundamental nature.