You Can, You Must

SUBDUING THE MIND, ACTUALIZING THE PATH 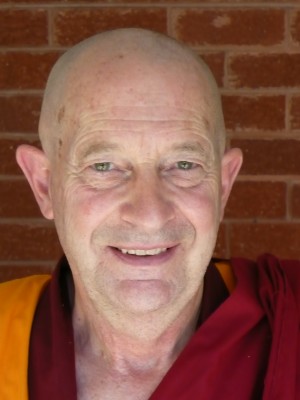 Ordained 35 years ago by Lama Yeshe, Australian senior student and author of A Leaf in the Wind Thubten Gyatso (Adrian Feldmann) completed a three-year retreat at De-Tong Ling Retreat Centre on Kangaroo Island off the South Australian coast in November 2008. He currently lives at Thubten Shedrup Ling, Eaglehawk, Victoria, Australia.

What is the proper motivation for going into a retreat?

I think we all know what the proper motivation is. Improper motivations would be to enhance one’s reputation as a meditator; to achieve clairvoyant powers for self-glorification; to compete against one’s Dharma colleagues; to escape society by seeing the outside world rather than one’s own mind as samsara; to have a holiday. But I think the most important factor behind going into retreat is to do so with the guru’s blessing and instructions. This is essential for a retreat of long duration. Also one must be determined to follow the guru’s instructions without deviation. As attainment of single-pointed concentration is essential for actualizing renunciation, bodhichitta, and the wisdom directly realizing emptiness, we should all have the strong intention to create the conditions to perform a calm-abiding retreat as soon as possible.

What happens to the mind while on retreat? In other words, what does retreat allow the mind to do that it would not be able to do in non-retreat mode?

Whether it’s analytical meditation or single-pointed concentration, retreat is the best situation for maintaining one’s focus on the practice with minimal distraction. As much as possible, one needs to acquire and maintain the list of outer and inner conditions mentioned in Tsongkhapa’s Lam-rim.1 I always remember Lama Yeshe saying, “Don’t put your samsara on the wall.” In other words, be content with whatever you have and don’t give in to the desire to decorate your room or make a garden or follow any other time-wasting and distracting hobby.

In my experience, the mind brings up past events in one’s life, the happy and the sad experiences, and relives them over and over again with an intensity of feeling and a depth of memory that is quite remarkable. This can be made use of when doing analytical retreat on the Lam-rim, but in a concentration retreat, it’s a distraction that destroys any chance of gaining mindfulness.

For a tantric retreat, the entire 24 hours of each day becomes your sadhana. It’s absolutely beautiful, and you will realize why tantra is such an important and quick method to attain enlightenment.

Although our tradition greatly emphasises learning and understanding the philosophical teachings, in the early years, Lama Yeshe encouraged his students to do long retreats up to three months as soon as possible. Usually we began with Vajrasattva retreat because we needed to purify obstacles and accumulate merit. Lama also encouraged retreats where deity-yoga was combined with meditation on lam-rim. My first retreat was three months Chenrezig and lam-rim, and was a hugely important experience where the jigsaw parts of the lam-rim came together, giving me the courage and determination to take ordination. I cannot emphasize strongly enough how important it is to stop the outside world and do a proper retreat. Lama Yeshe’s early advice to his students, especially the Sangha, was to try to do at least three months retreat every year.

What can a retreatant hope for and/or expect to happen to them during retreat?

A retreatant should go into retreat and into each session without any expectations but simply with determination to do one’s best. When “good” sessions happen, don’t hang on to them. I almost regretted experiencing a “good” session because without fail the subsequent sessions, even over several days, would never measure up to the supposedly good one.

Also, when things are going badly during a session, never give up. Stay on your cushion, fight the physical or mental pain, and sometimes that session can suddenly become the best. You’ve got to reach your threshold and then push a little further. How much further is up to your wisdom; if you push too much you’ll get sick or go crazy. You have to learn your limits, and your capacity to go a little further. This is done slowly, slowly, you cannot be in a rush or too demanding of your mind. It’s important to know when and how to relax, and you can only discover this through trial and error. My constant advice to people is, “Don’t be too bloody serious.” Never lose awareness of the humorous side of your samsara. Remember, your mind is not you. Treat it like a loving parent guides a naughty child. Laugh at its mistakes, scold it, congratulate it. Don’t take it seriously.

What can a retreatant hope for and/or expect to at happen after his or her retreat ends? How can one preserve the accomplishments?

It is essential to go into retreat with an open mind and not to have plans of what to do afterwards. If you do have ideas of what you want to do, this will become a major obstacle to concentration. Being completely open about what you might do after retreat is a liberating attitude. During retreat stay in the present as much as you can and maintain this attitude after retreat. This gives great flexibility to adapt to changing conditions in the most skilful way. After a retreat of three months or longer you will come out a different person, and the world and your acquaintances will be different as well. Don’t cling to the past or try to recreate past relationships and comfortable situations, that’s impossible and you will become lost. After retreat, bravely step into your new world with an open mind.

In general, one develops a comfortable and blissful “glow” during retreat. This will fade a little but, in my experience, never fades completely. The retreat experience gives an inner sense of confidence; it establishes your refuge in the Three Jewels more strongly; you are clearer in your direction in life; your self-confidence is much stronger. I think the main thing which preserves these positive results is unwavering devotion to the guru and the gradual emergence of your inner refuge, the actualization of the Three Jewels in your own mind.

What does it take to make a retreat successful?

Every sincere effort to reduce the mental afflictions and enhance virtue is successful by nature. Don’t anticipate or judge success by your state of mind or your ability to sit still for long periods. Great inner turmoil or devastating dreams can be a sign that you are doing well. They can also be signs that you are doing badly. We beginners in retreat are travelers in a foreign land. We have the guide-book of the Dharma to tick-off our experiences, pleasant or unpleasant, according to the teachings, and we must then always move on, push further. Avoid complacency or giving up, thinking “I can’t do this.” You CAN do it and you MUST do it. You may not get another opportunity for many lifetimes.

Would you describe a little bit of your own experience with retreat?

You are talking to Mr. Laziness who delights in distraction. Despite being a very bad meditator, all my retreats, especially the three-year retreat, have been immensely inspiring experiences where my refuge has grown more strongly, with increasing confidence in the Dharma becoming an unshakeable foundation for this life. I began the three-year retreat determined to not waste time by making a garden. I finished it with a beautiful stone wall surrounding a sizeable garden with three fish ponds and numerous flowering shrubs and trees, water lilies, orchids, and so on. I saw my biggest enemy in retreat as being Osama bin Possum the garden terrorist when, actually, of course, the problem was in my mind.

Kimball Cuddihy and the many people who have helped make De-Tong Ling Retreat Centre what it is have done a wonderful job. They’ve made it most conducive for proper retreat, the weather is very suitable, the cabins are first class, and the kangaroos, snakes, echidnas, goannas, swallows, and other critters are too friendly.

Even though I didn’t go beyond the second of the nine stages of mental development towards shamatha, my three-year retreat was the most worthwhile and powerful experience in my life. Ever since my first three-month retreat before ordination I had wanted to do a long retreat. As each year passed after ordination in 1975, when I reflected on what I had learned that year, I would think, “I’m lucky I didn’t start the three-year retreat last year.” I never directly asked Lama Yeshe or Lama Zopa Rinpoche if I could do a long retreat, but the wish was always there. In 1999, out of the blue, Lama Zopa Rinpoche told me, “In five years time you should do a three-year retreat.” And he gave me instruction on what practices I should do. In 2004 I reminded Rinpoche of what he had said. He looked at me in mock disbelief and said, “Did I say that?” He could see that my mind was fully determined, and he gave me more instructions. During the retreat, the knowledge of Rinpoche’s support and his advice was without question the most important factor in making the retreat what it was. It cannot be done without the blessing of the lama.

You can read Owen Cole’s interview with Thubten Gyatso “Inner Peace and Happiness during Three-Year Retreat” from Mandala July-September 2009 online. Owen talked to Gyatso after he completed his three-year retreat on Kangaroo Island in November 2008.

1.
1) Living in a proper and conducive place: includes being well-acquainted with the practice with no doubts. A place where holy beings have been blesses those who meditate there, especially novices.

3) No robbers or wild animals; no sounds of birds and humans by day or dogs and water at night.

4) Healthy water and air that do not induce fevers etc., no earthquakes, floods, etc.

7) Being content with what you have, no matter how poor it may be.