Big Love, the long-anticipated authorized biography of Lama Yeshe written by Adele Hulse, provides an intimate portrait of FPMT’s founder. In 1979, an extensive teaching tour in Europe has been organized by Lama Yeshe’s burgeoning organization for Lama Yeshe and Lama Zopa Rinpoche, but Rinpoche decides that he wants to stay at Lawudo, his hermitage in the mountains of Nepal, to meditate. To what lengths will Lama Yeshe and devoted students go to bring him to the West? 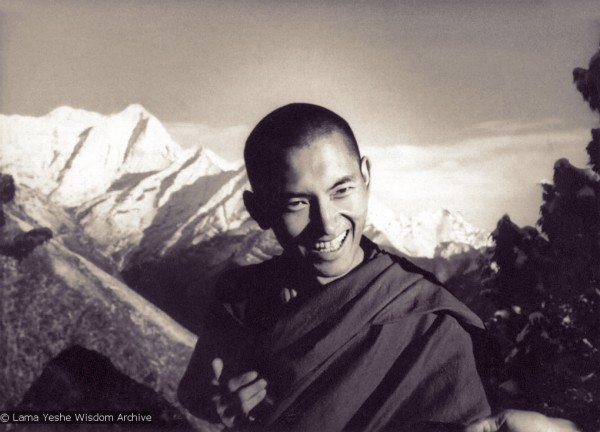 One day a telegram arrived at Joyce [Petschek]’s house [in London]. At first Piero [Cerri, one of Lama Yeshe’s attendants in 1979,] thought it was from some Dharma hippie. “It read something like, ‘Your compassion is beyond the limits of the mind. At this time I think I have to meditate, so I cannot come to teach on the courses in Europe. Anyway, Piero is with you and he can teach as well as I can.’” It was signed, “Zopa.”

Piero Cerri: “I couldn’t believe it really was from Rinpoche. I didn’t want to show it to Lama [Yeshe] but later, when we were in the taxi going to Oxford Street, I read it to him. As I read it out the meaning became clear to me, because Lama was repeating the words and stopping all the time. ‘Rinpoche says he wants to meditate,’ said Lama. He didn’t budge an inch. He was unsurprised and totally cool, but it was a serious thing. We had courses booked at Manjushri Institute [in England], at Istituto Lama Tzong Khapa [in Italy], in Holland and in Spain. All the advertising had already gone around and the airline tickets were arranged. Rinpoche backing out was a major upset. Lama went off to his class and sent me off to send a telegram. The tone was like, ‘Yes, I understand. But this time everything is ready and you have to come. So, please come.’ It was very well written and not heavy and I had to send it ‘most urgent’, which cost UK£40 back then.

“Later Lama said to me, ‘Lama Zopa is not playing games. In reality he is putting himself down as the lowest of the low.’ He told me once that whoever doubts Rinpoche doubts Buddha.”

The telegram was delivered to Kopan where Jacie Keeley [Lama’s long-time secretary] received it. Peter Kedge [director of FPMT’s Central Office] was in India, having left instructions that if Lama Zopa didn’t return from Lawudo by a certain date, Jacie would have to go up and fetch him back.

Jacie Keeley: “That date came and went. I was facing a difficult situation, so I went to see Serkong Dorje Chang at Swayambhu. He made observations with the dice and said, ‘If you don’t get Lama Zopa now, you will not get Lama Zopa down for a long time.’ I borrowed money from Marcel [Bertels] and hired a helicopter.” The monsoon weather had already started and flights to and from the mountains would stop completely once the monsoon rains arrived in full force.

“The sky was terribly overcast,” Jacie continued, “until we swerved and the clouds opened like the Red Sea. We landed below Lawudo Gompa, because there was no place to land beside it. I ran up the path to the cave, still weak with hepatitis and with the pilot shouting from below, ‘Run faster, the clouds are coming!’ I got to the top and there was Rinpoche. He said, ‘Didn’t you get my letter? I’m not coming this year.’ I told him that I didn’t know about the letter and that he didn’t have to come if he didn’t want to, but then he said, ‘Let me make some observations.’

“The Sherpas packed Rinpoche’s things, grabbed some food and a thermos and raced down to the helicopter. By the time we got there they had a little folding table and a chair set up so Rinpoche could have a cup of tea. He had to sit down, drink the tea and get into the helicopter. There he sat, not looking at anybody. Rinpoche’s mother and sister were hanging off the helicopter, tears pouring down their cheeks. They only let go at the last moment.

“We got to Kathmandu safely and when we were in the taxi Rinpoche told me, ‘I have never prayed so hard in my life not to have to go to the West. But the whole time I was making these prayers I could feel there were stronger prayers being said and that mine wouldn’t work.’” Rinpoche said later that just before the helicopter arrived, which was at the end of his morning session, a vision of a row of Westerners appeared in front of him, chanting the first line of the dedication prayer, Ge wa di yi nyur du dag (“Due to the merits of these virtuous actions…”)1. He thought this meant that his retreat was probably over. He also commented that Jacie had been very respectful in the way she presented the situation to him.

Jacie stayed on at Kopan with Karuna Cayton, Maureen O’Malley and the boys [young Kopan monks] throughout the summer monsoon. Every day she trudged up the hill from [Ngawang] Chötak’s house, through mud and leeches and pouring rain to endless meals of potatoes – boiled, fried or mashed. Monsoon food. She repainted the office, added bright cushions and taught the boys basic geography, so they could know where their lamas were in the world.

“Americans are so insulated. Even though I was a college graduate I told them that Greece was an island. I showed them a picture of downtown Chicago in rush hour and asked them if they had ever seen anything like that before … and they said, ‘Yeah, Asan Tole!’ In their minds flashy cars were the same as ox-carts, goats and box-wallahs,” said Jacie.

When Lama Yeshe met up with Rinpoche again in Europe he told him, “Even your breath in the West gives benefit.” This is similar to what people used to say to Lama Tsongkhapa.

1. This Tibetan phrase begins a common dedication prayer, which has been translated as: Due to the merits of these virtuous actions / May I quickly attain the state of a guru-buddha / And lead all living beings, without exception, / Into that enlightened state.