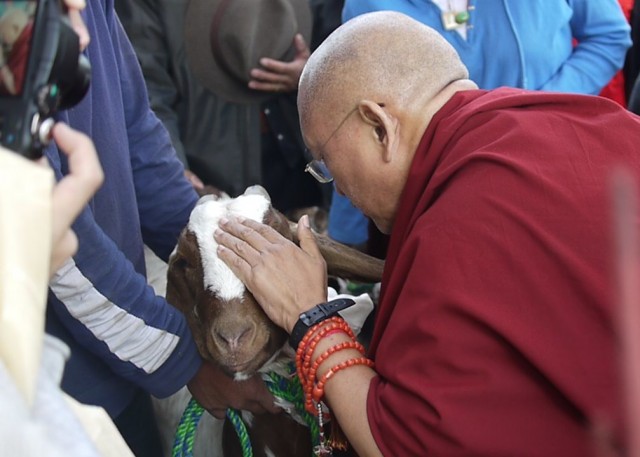 By Tania Duratovic and Phil Hunt

Just what is the difference between animal liberation and an animal blessing? In the Buddhist sense, animal liberation is rescuing animals from impending death and then giving them Dharma by undertaking certain Buddhist practices including circumambulation and mantra recitation. It is usually done as a practice for long life and removing life obstacles, the merits being dedicated to someone else with specific obstacles, as well as to all living beings. An animal blessing, on the other hand, will include the same practices of circumambulation and mantra recitation but the animal involved has not necessarily been recently rescued from death, like someone’s pet.

Whichever activity you are undertaking, liberation or blessing, such Buddhist practices to help animals have many benefits. They help the animals, the people doing the practices and those for whom the practices are dedicated. However, there are also risks and with that comes responsibilities.

Of utmost importance is the care of those living beings by practitioners whether temporarily, prior to release into the wild, or long term as pets or at a sanctuary. While Buddhists believe the karmic benefit of doing these practices will be ongoing and perhaps have a greater effect in future lives, the welfare of the animals in this life is also critical. Animals should be handled and cared for as the “kind mother sentient beings” we are taught that they are, and as the fragile living creatures that share our planet and suffer physically, mentally and emotionally.

You can find additional information on animal blessing events on the Enlightenment for the Dear Animals website.

“It is best to liberate an animal that you are able to look after yourself. By feeding them every day, you perform the Dharma practice of giving charity and create much good karma, the cause of happiness. You not only bring happiness to the animal, but also constantly create the cause of your own future happiness. Also, if the animal is carnivorous, you save it from killing other animals.” – Lama Zopa Rinpoche (Liberating Animals, p.5)

There are quite a number of things to consider when wanting to undertake an animal liberation. One liberates an animal from death in the hope that not only will the animal be exposed to Dharma, but also that it doesn’t die shortly after because you released in the wrong place or manner. For that, you need to do a bit of research. 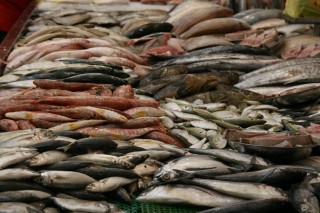 Fish from many regions at a wet market in Singapore

The conditions to survive

In some countries, it is a popular practice for some Buddhists to save marine creatures such as various species of fish; mollusks, like mussels; and crustaceans, like crabs from the market and then release them. Marine animals are often sold hundreds if not thousands of kilometers from their natural homes and if they are put in an unsuitable place, they will die or be killed. Each creature comes from its own specific habitat and has different requirements in order to survive. Unfortunately, this is usually not taken into account during Buddhist mass releases. Fish from rocky shores are released in the open sea, mud crabs from brackish estuarine waters are released on sandy shores, schooling fish are released singularly and so on. Wrong habitat, no shelter, no food means easy prey. The animals will be stressed, frightened and most likely die in difficult circumstances.

In addition to this, the creatures can be thrown into the water without much thought or care about injury. For example, fish are released straight into the water, tossed from a height with the full impact of the water hitting their sides or crabs are hurled from a beach, their limbs breaking off in the panic to avoid being pinched, and often with strands of plastic twine entangled around their shells, which then pollute the oceans.

And this type of injury is not limited to marine creatures. When conducting training in South East Asia on rescuing animals from disasters, Tania was approached by one participant who was often called on to rescue sea eagles who had been bought by Buddhists from bird markets (bird markets in Asia are places of terrible suffering) and then released in the mountains because that’s where the Buddhist temple was. This participant was quite distressed by the ignorance of these Buddhists who release animals into a habitat not suitable for them.

Similarly in places like India and Nepal, usually at holy sites, one often sees well-meaning Buddhists buying caged birds from sellers and then releasing these exhausted creatures into the wild. Often they fly a couple of meters and then collapse where the bird seller recaptures them. Others are swooped upon by birds of prey. All this does is perpetuate the market of capturing wild birds. As well as being illegal, it is cruel.

In many parts of the world, releasing animals into the wild is illegal without the proper permission from authorities. There is good reason for this. Apart from the reasons above regarding wrong habitat and slow death, there is also the impact on the receiving ecosystem.

If the creatures you have released do survive, what threat do they pose to the local species? How likely are they to upset the ecosystem? There are countless examples of introductions of various species having a devastating effect on the environment. The animal you release could be displacing local species for shelter and food. It could also be introducing disease, which is likely with many animals rescued from live or wet markets. And if the animal survives, it may interbreed with indigenous species and negatively affect the gene pool. The law to not release animals into the wild without permission is there for a reason.

In most progressive countries, there are laws against releasing animals into the wild. There are also laws against taking animals from the wild, as in the case of birds in India and Nepal. In the course of carrying out our spiritual beliefs, do we wish to be supporting a livelihood that involves suffering and illegal activity?

If we have carefully considered the potential harms and can say the risk of a greater harm is unlikely, then perhaps there are exceptions that can be justified. For example, if you have rescued an animal from a car accident and rehabilitated it and it is ready to be released into the wild in an appropriate area without permission from the government, perhaps it is OK, even though this is also, strictly speaking, illegal in many countries. However, this is different from releasing large numbers of birds or marine creatures in a different habitat. It is also different from buying a goat from a butcher or cow at the stockyards that will otherwise be killed. 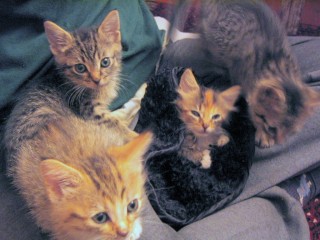 Kittens at a foster home, awaiting a new, permanent home

Caring for those rescued

Releasing an animal into the wild cannot always be done. For domesticated species, this is just not possible. In some Dharma centers, people rescue animals such as goats but then do very little to look after them. The care of an animal is not an easy thing, especially farm animals. Many people think that all a goat needs, for example, is some grass and that’s it. Unfortunately, that is not the case. Farm animals require a great deal of work as well as money to care for them properly. Each species, whether goat, sheep, cow or pig, has different nutritional requirements, foraging habits, shelter needs and so on. Sanctuaries have limited space and resources to be able to look after rescued animals, yet often people think that by buying an animal from the butcher or saving one from neglect, the job is done. They rarely give a second thought to the long-term care of that animal or provide any contribution for its care when leaving it at a shelter or sanctuary.

If you rescue an animal from being put to death at a pound, for example, and you adopt it yourself, you then gain merit every day by caring for it. If you cannot keep the animal in the long term, you can perhaps foster it until a permanent home is found. You can also provide Dharma for that animal every day that it is in your care. This is the best way by far to liberate an animal.

A common reason for not giving greater care for rescued animals is that “it is their karma” and “besides, they’re only animals. We’ve done our bit by rescuing them from death. Surely once the ‘blessing’ is completed the positive merit will now be sufficient to help that sentient being out of suffering?” Blessings clearly haven’t worked for most of us, as we still have lots of work to do to reach enlightenment, yet we are very happy to receive medical treatment for injuries and illness, shelter, food and water for daily life, and love and affection in the meantime. Animals also require these basic things. We do not know how long it will be before Dharma practices will ripen for that being and every moment in the lower realms is suffering in more ways than one. 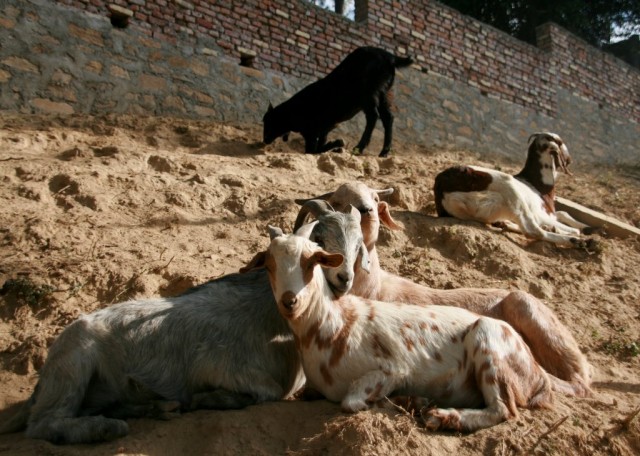 Clearly, animal liberation as a compassionate and responsible Buddhist practice is not as simple as it may first appear. This should not discourage us from doing it, but it should make us think before we leap in. Perhaps liberating thousands of shellfish won’t work for us, but adopting a cat from death row at the pound might. It’s not always about the numbers. By providing a loving home for the rescued animal or animals, we get to extend the Dharma contact and also help socialize these beings with caring humans. We create a connection that will ensure we will be helping each other in future lives. When it comes to animal liberation, combining a little wisdom with our compassion will achieve much better results and less suffering for us and for our animal friends.

Tania and Phil are the project coordinators and founders of Enlightenment for the Dear Animals  and coordinators of the Animal Liberation Sanctuary in Nepal. Tania is an ecologist, zoologist and veterinary nurse. Phil is an archaeologist who works in Australia for the Aboriginal Heritage Office and who has been involved in animal care and rescue for many years.

You can read more of Mandala’s coverage of the Animal Liberation Sanctuary and animals liberation activities online.

Liberating Animals (book) and Recitations for Animals (CD) are both available through the FPMT Foundation Store. You can also find there Essential Buddhist Prayers, Vol. 2: An FPMT Prayer Book, which contains the animal liberation practice, as well as “animal liberation tools,” special insect catchers recommended by Rinpoche to be used in all FPMT centers.