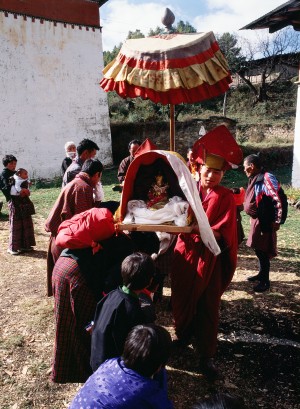 Bhutan, the landlocked Himalayan nation between China (Tibet), and India, is coming into its own. As economies and political systems around the globe struggle through the world-wide recession, the government of the tiny Buddhist nation of Bhutan is proposing a new way to measure prosperity that eschews economics as a sole indicator. Called Gross National Happiness (GNH), Bhutan’s development program challenges the very definition of how we determine well-being by attempting to measure happiness and spiritual development as well as economic prosperity. Under Prime Minister Jigmi Thinley’s leadership, GNH factors equitable economic development, cultural preservation, good governance and ecology as opposed to GNP growth.

Geography aside, Bhutan has never done things in a small way.

This fall Bhutan’s Thinley is everywhere. In his address to the United Nations General Assembly in New York in September, he proposed that “happiness” be designated the 9th Millennium Development Goal to the bemusement of the assembled delegates. On Danish TV, Thinley said that Bhutan has developed a formula for determining happiness that measures 72 variables, “the changes that are taking place and the feelings of the people with respect to happiness.”

Addressing the First Happiness Congress organized by the Coca-Cola Institute of Happiness in Madrid, Thinley used the marketing-oriented venue of the self-described “world’s largest beverage company” to deliver a dark message. He told the assembled audience that humanity was heading for self-destruction in “a downward spiral of de-civilization.” “Our economic models are greatly, deeply flawed. They are not sustainable,” he said.

Thinley is clearly compelled to get his message across. He is a different kind of politician. A career civil servant, he is also a Buddhist and an intellectual. He tends to cut through the political clutter in an attempt to do and say meaningful things.

Bhutan is an agrarian society. The country is land locked, and much of it, over 80 percent, is uninhabitable because it is too steep, not arable, or forest covered (Bhutan must, by law, remain 60 percent forest covered in perpetuity). Many farmers grow only enough for their families to eat because they have very little land to cultivate and even if they had surplus crops, it is would be difficult and time consuming to transport perishable goods to the nearest market.

There’s no doubt that in monetary terms, Bhutan is a poor country. But there are other factors to consider: Bhutan has free healthcare and education; its people are deeply spiritual. It is difficult to measure many of the things that enhance the “wealth” of the Bhutanese people. In happiness, spiritual development and social capital, they are rich. Even the poorest village in Bhutan has at least one temple.

“When we talk about poverty there is most often a material underpinning,” Thinley says. He believes that poverty is actually relative to our values. “It has to do with the value framework. We draw lines,” he says. In other words, one person’s poverty is another person’s wealth depending on what values they place on what they have or don’t have.

“We wanted to raise the income level of the farmers,” Thinley shares, “The government introduced new cropping patterns, which gave the farmer’s the ability to double rice harvesting in a temperate region. That way, the farmers could have two harvests of rice per year. They would have rice to eat and rice to sell. One farmer in particular did very well.

“The following year, we asked him to do it again, to plant two crops of rice in one year. We wanted to use him as a model. He could go around and teach the other farmers.

“The farmer refused. Why should he plant more rice that following year? He already had two years worth of rice. He was rich. I was struck then by my role as an agent of change. If I was to succeed, I’d have to teach this farmer greed.”

There is no doubt there is material poverty in Eastern Bhutan, but the people have the opportunity for a spiritual life. They are often happier than many people who have greater wealth. Thinley says his understanding of poverty includes a “lack of security.” Someone who has no security cannot be guaranteed health, education or spiritual enrichment. This is the ultimate poverty.

“We all need refuge,” he says. “We need somewhere to go. We need comfort during difficult times. Buddhists are able to have this refuge. Happiness is about living within certain moral and ethical structures. As the rich people become spiritually impoverished, material acquisition in many cases is dehumanizing. Those living above the poverty line are often spiritually poor,” he points out.

Thinley believes true wealth means a balance between the material and the spiritual in our lives. He says he is inspired by so many wealthy people in the world who are uplifted by giving.  “Many change dramatically as they realize the horrors of their so called rich lives,” he says.

Linda Leaming is a long time resident of Thimphu, Bhutan. Her book, Married to Bhutan will be published in April, 2011 by Hay House. You can read her blog, www.marriedtobhutan.com, and follow her on Twitter at www.twitter.com/lindaleaming