Geshe Potowa of the 21st Century

Each year, FPMT International Office hears from hundreds of people who have been touched by their interactions and involvement with Lama Zopa Rinpoche.

This account of a day with Lama Zopa Rinpoche comes from Ven. Thubten Jinpa, Kopan Lama Gyupa, who has often served as Rinpoche’s second attendant and was with him recently in Dharamsala, India.

He writes on March 14, 2009: I am sure this needs some editing, but I wanted to mention that the point of the account should be kept intact. The feeling I experienced was real, not something I made up only with words. All I want is to share how each of Rinpoche’s actions are the true copy of those great master bodhisattva’s actions which we believe in only by hearing about them and seeing them described in the texts, but are rarely seen in person. I really hope that this account will be a good inspiration for all. 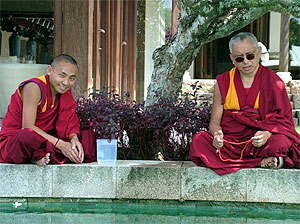 After a long and busy tour in South East Asia and South India, we have come to this little valley of Himachal, a state of North India, due to a sudden change in the schedule. Lama Zopa Rinpoche, myself, Ven. Sangpo and Ven. Kunsang are staying in a house owned by a very old student of Lama Yeshe and Lama Zopa Rinpoche – Jimi, a nice guy in his 60s. His house is made of all the material available around him such as mud from behind his house and bamboo from the nearby forest. The house is located just at the bottom of a mountain below the small hill station in Dharamsala. It’s so quiet and peaceful – we’ve had no visitors and no more appointments since we’ve arrived here.

Rinpoche put more Christmas lights inside and outside which has made the little house a temple of lights. We have come here to attend teachings by Denma Lochö Rinpoche. The venue for the teachings is a twenty-minute walk away in Gyuto Monastery. I feel happy to be in this environment as it reminds me of my home, Rolwaling. We have planned for Rinpoche to walk every day back and forth from the teachings as it gives Rinpoche some chance to have a bit of exercise which helps to bring his blood sugar levels down. I am excited to walk through the rice paddies and barley fields with Rinpoche every day.

It’s a wonderful morning. The sun is just rising and its first rays have hit right through my window. Unfortunately, I didn’t hear my alarm clock. It felt like I had only just gone to sleep but it is 5:30 a.m. already. I go to Rinpoche’s room hoping to see him resting as we had just come back from Tushita at 3:30 a.m. after a long teaching followed by Guru Puja. But to my surprise, the holy guru is already sitting in meditation! Now I begin to panic and rush back to the kitchen to make a cup of tea.

At 9:00 a.m. the tea that was offered at 6:00 a.m. is reheated for the third time, the bowl of porridge near Rinpoche’s bed is cold as ice and the two slices of toast are hard as stone, yet the holy guru seems not aware of the breakfast sitting there for him.

At 10:00 a.m.  I hear the bang of the bathroom door. I enter Rinpoche’s room to now find only half a bowl of the porridge and one slice of toast.

Rinpoche is not in the bathroom more than 10 minutes when he suddenly comes out full speed, rushing towards the relics placed on a table in the middle of the room for people to circumambulate. Rinpoche has soap foam on the back of his head and the corners of his holy ears haven’t been wiped properly. A smudge of shaving cream is still on his throat; his upper shirt is fully wet. Rinpoche has seen a tiny ant and he is holding it in his holy hand (he must have picked up the ant from the bathroom floor.)

Many times Rinpoche runs around the relics. He always emphasizes that the best method to help sentient beings is by helping them to purify the negativities by the power of holy objects. Rinpoche seems to have unbearable compassion in his heart for that little creature and feels so concerned about its safety.

I am just happy because at least Rinpoche is getting some exercise.

I keep reminding him of the time, always keeping at least 10 minutes ahead of the correct time so that I don’t panic later. Rinpoche knows the actual time and he has not shown any sign of moving. He is still reciting his prayers and I know it will be followed by hundreds of long prostrations. The time is getting more and more close to 2:00 p.m. and I remind Rinpoche of the time four more times. I am hoping that as soon as he comes down from his room that he will sit at the dining table for lunch, but instead, when Rinpoche comes down, he runs straight outside where the water and food are ready for preta1 offerings.

Rinpoche spends all his lunch feeding the pretas. I don’t know who else was invited.

There is not even 15 minutes left until we have to leave. I am happy that it is just enough time for Rinpoche to eat his lunch properly. I am wrong again. Instead, Rinpoche spends that time making extensive offerings.

By the time he comes back to the food that is waiting on his plate, time has run out and we have to go, but I pretend that we have enough time so that Rinpoche can at least have a proper meal.

As an attendant, my priority is to try to look after Rinpoche’s meals and other private needs, particularly as Rinpoche seems to take care of himself last.

No matter what excuses I make, Rinpoche knows the actual time left so he only chews some of the rice on the plate and seems to just swallow rest. I am thinking to myself, “How can it be digested like that!”

Then Rinpoche says “let’s go” even before half of his plate is empty. Although my mission was for Rinpoche to walk and have some exercise, time has run out, and poor Jimi has to run to get his little Maruti. During the ride, Rinpoche asks him twice to increase the speed. Sometimes all four  wheels touch the road and other times just two wheels touch. We make it just before the actual teachings begin. Hearing the chant of the mandala offering from the gate of the monastery makes Rinpoche run faster.

The teachings are so powerful and moving to the heart, yet very simple. In between the oral transmission of the teachings, Rinpoche tells the story of the author. It is said that Geshe Potowa is not someone who is a scholar, nor a re his teachings very philosophically profound or vast. His teachings are simple, yet they benefit so many others by moving their hearts. Even when Geshe Potowa tells the story of birds or animals it makes a great impact on people’s minds.

Geshe Potowa is also called long me thug la trung pi potowa, meaning “Potowa in Whose Heart the Realization of No-Time Has Been Achieved,” for Geshe Potowa never had the time for non-Dharma activities. He would constantly meditate or give teachings to others, otherwise he did prayers constantly. He was always in a hurry to do Dharma practice saying, “I should do Dharma now otherwise I shall die soon.” For him everything he saw or every incident that happened in his life was a means of teaching or subduing the mind.

This is all about the great Geshe Potowa of the past, but now I think that Geshe Potowa still exists in this world, in this degenerate time of the 21st century. Furthermore, I am convinced that our guru, Lama Zopa Rinpoche, is no other than Potowa.

Denma Lochö Rinpoche said that Geshe Potowa, because he had no grasping at all for his own self, never cared for his meals, health and clothing, and of course no question for shelter because his Dharma practice was placed ahead of every comfort of this life.

As Denma Lochö Rinpoche resumes the story about Potowa, he recites two lines of quotations that comment on Potowa’s action by the great Amdo lama, Gungthan Jampelyang: “He would have plenty of heart advice to give, [he] who is subdued by seeing every appearance acquired by him as examples [that] relate to his Dharma practice.”

As soon I heard this I realized why Lama Zopa Rinpoche often mentions the animals he sees on TV, such as on Animal Planet or the National Geography Channel during his teachings. I wondered why Rinpoche needs to spend hours talking about how and what the little creatures do, but now I understand that for Rinpoche all those things are not merely TV shows, but rather are direct teachings to develop bodhichitta and an understanding of karma.

By the time we reach home it is almost dark. A cup of tea and some snacks are waiting for Rinpoche, but they are just ignored. Rinpoche sits down and begins to open the texts around him and starts to jot down notes.

At 8:00 p.m. a jeep has come down from Tushita to take Rinpoche up to teach. All of a sudden the holy voice says, “Jinpa, let’s go now.” I pick up a few texts that Rinpoche has set aside to take with us and grab a chogu2 and run to the car following Rinpoche. Rinpoche is teaching at Tushita tonight and we have an hour’s drive and long night to go. I hope Rinpoche will be able to eat his dinner by 3:00 a.m.

If you have a story about Lama Zopa Rinpoche that you would like to share, please send to: michael@fpmt.org

1 Also called “hungry ghosts,” pretas are one of the six types of sentient beings found in the realm shared by humans. They are distinguished by their distended bellies, thin necks and limbs, and sunken features. As a result of insatiable greed in their past, they currently experience extreme hunger and unquenchable thirst.

2 The yellow upper robe made of seven strips of patches, usually worn for teachings, initiations and other important occasions.