What is a Geshe? 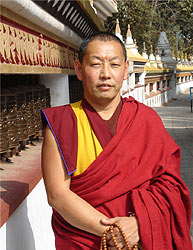 Among the sects of Tibetan Buddhism, the Gelug school places the most rigorous emphasis on philosophical study, administrating a scholastic degree in large monastic universities that can take two decades or more to complete: the “Geshe” degree. These universities are modeled after the Indian monastic institutions of the past, such as the historic Nalanda and Vikramasila universities, which gave rise to a tradition of philosophical rigor and debating prowess as the foundation for deeper realization that has defined the Gelug school for centuries.

The title “Geshe” is not just a name for a graduate. In the monastic system we believe that to graduate as a Geshe is to create the karmic imprints to take rebirth in Shambhala. “Ge” means “virtue” and “she” means “knowing.” Geshe thus means one who knows virtue, one who knows what should be practiced and what should be abandoned.

There are four levels of Geshe degrees categorized under the set criteria of a Gelugpa university – Lharam, Tsokram, Rigram, and Lingse. To qualify for the monastic degree of Geshe, the student must undergo the vast and extensive traditional monastic studies on the five major treatises of Buddhist philosophical texts [The Perfection of Wisdom (as elaborated upon by Maitreya in the Abhisamayalamkara; Chandrakirti’s commentary on Nagarjuna’s root text on Madhyamaka; Dharmakirti’s Pramanavartika – Compendium on Valid Cognition; Vasubhandu’s Abhidharmakosha; and Vinaya – studies in monastic discipline].

The specific commentaries on these five treatises which are studied are not fixed. Some read more and some read less. It depends on how enthusiastic is the student. It also depends on the university. To enable a clearer understanding of the theories put forth in the treatises, the monasteries use Yigchas, mainly collections of chosen commentaries that are similar to textbooks.

According to the Sera Je monastic study system, a minimum of seventeen year’s study is required. The best students who are able to meet the required standards are then granted the privileged eligibility to study for the Lharam Geshe degree. Only the students who get into the first and second divisions are allowed to go for examination. For the Geshe Lharampa degree a further six years of study is needed prior to examination – a total of at least twenty-three years of rigorous study. When it is time for examinations, the three main Gelug monsteries of Sera, Drepung, and Ganden hold their exams together. …