The Giving Tree: A voice for the singing river

The Giving Tree: A voice for the singing river 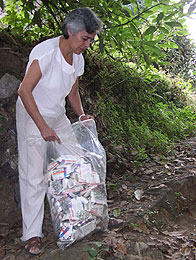 Luz Bella removes some of the empty (and sometimes not empty) packages of pseudoephedrine from the river: part of the drug problem.

In keeping with our environmental theme in this issue, we present another unsung hero in our series about people who inspire. Luz Bella Ramirez of Uruapan, Mexico, has been nominated by Lobsang Tonden, assistant spiritual program coordinator at Kurukulla Center in Massachusetts. Luz Bella’s goal: to save one of the world’s most beautiful rivers. She tells the story:

The Cupatitzio River gives life to a national park in Mexico that attracts a thousand visitors a day. It provides all the community’s potable water, irrigates agricultural fields, and generates all the electricity for Uruapan. In return, we give it rubbish and pollution.

Some five or six years ago, Ven. Thubten Paldron [an Australian FPMT nun who was the first monastic to visit the local Buddhists] came to Uruapan. She was enchanted by the Cupatitzio, and said that we should do something to save it and clean it. I was already very concerned, and her words gave me extra motivation.

What really motivates me is its mesmerizing beauty and its kindness: it goes on giving us life even as we continue to pollute it. Sadly, it is diminishing rapidly due to deforestation. And as soon as it leaves Uruapan, the river is practically dead with pollution. 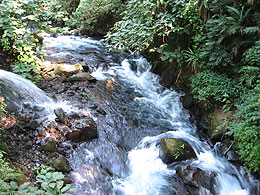 The levels of the Cupatitzio River have dropped fifty percent and in some places the river has dried up.

I have the dream that one day the children will enjoy seeing that singing river (that’s what Cupatitzio means in the indigenous language) clean again throughout its whole length, just as I enjoyed it when I was a child. During a visit by Geshe Tsulga (from Kurukulla Center) to the city, he did a Green Tara initiation beside the river, inspiring us even further.

I am not the only one working on this problem – several members of the Chekawa Study Group also belong to our environmentalist group, Tierra de Mis Amores – but I worry that it won’t be enough. As part of our campaign to clean the river, we’ve promoted the ideas of adopting a length of the river bank to clean it and restore it. Now when our group goes out cleaning the river bed and ravines, many others have joined in: schools, neighbors, youth doing military service, business people and even the government to a limited extent. We do need funds to rent machinery to take out rubbish that we cannot reach by hand.

Thank you for thinking of our precious river – I pray that readers think of their own waterways around the world.

Luz Bella Ramirez is coordinator of the FPMT Chekawa Study Group in Uruapan Mexico. She is a chemical engineer and president of Tierra de Mis Amores, the only environmental organization in her city.