Thubten Dorje Lakha Lama, who escaped from Tibet in 1959, has been living in Denmark — and devoting his life to others — since 1976. For years he has been organizing ‘helping hand’ agencies, such as the Buddhist Forum, the Committee for World Peace, and Tibet Charity. He explains:

“The Committee for World Peace is our small contribution to peace in the world. Twice we’ve helped organize His Holiness the Dalai Lama’s visits to Denmark. Board member Else Hammerich went on to create the popular Center for Conflict Resolution in Denmark and a similar center in Dharamsala, India for Tibetan refugees. 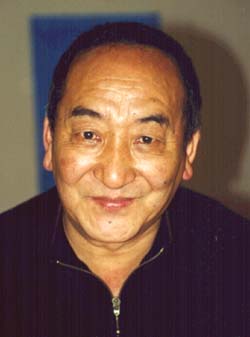 This project came about after Else had asked His Holiness the Dalai Lama how to help. Maria Damsholt, another board member, also established the Center for Conscious Living and Dying to help dying people — a project under FPMT’s Danish center Tong-nyi Nying-je Ling.

“We have sponsored more than 400 elderly Tibetans, as well as monks, nuns and children, and have also set up an educational project for young people with problems who drop out of school. With representatives in Nepal and South India, who look for and report new cases to us, we are able to find many needy people.

“As the Dalai Lama shows concern about dogs suffering from parasites and rabies, Tibet Charity has made contact with Danish veterinarians and suitable medicine for dogs has been bought. In January this year, we went to Mundgod, south India, with Dr. Gunvor Juul and 120 dogs were treated. This December four highly qualified Danish doctors will accompany us, with transportable surgical equipment, to treat the dogs in the Mundgod settlements and sterilize them. They will also treat sick cows…”