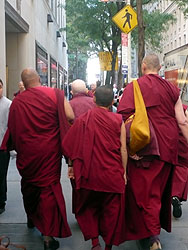 Don robes and you are making a public statement

Ven. Losang Monlam, director of the International Mahayana Institute (IMI), introduced the importance of the FPMT Sangha community in Mandala December 2007/January 2008. Now he reveals the need for a fundamental shift in attitude towards and by those people who have committed themselves to the ordained life.

Although the majority of the millions of Buddhists are lay people, it is taught that the ordained Sangha are crucial: The existence of the Buddhadharma in any one place depends upon the presence there of at least four ordained Sangha practicing the full extent of the Vinaya, Buddha’s guidelines on moral conduct. Lord Buddha himself said, “Wherever there is a bikkshu observing the Vinaya, that place is luminous, is radiant. I see that place as not empty: I myself abide there peacefully.” Mandala, October 1996.

About a month after I took over as Director of IMI, the community of Buddhist monks and nuns in the FPMT mandala, I was reading a Sunday news magazine and the feature story caught my eye. The article was about a small community of Catholic nuns in the Bay Area, and how they were surviving in a more secular society. Seeking to understand the parallels to the difficulties faced by the modern Buddhist monk or nun, I had to read the article, especially in light of Lama Yeshe’s early advice for our community to look at the Catholic community as models for our own.

After I took ordination as a Western nun, I felt like I had taken on a foreign identify within my own culture.  Strangers rarely say anything positive to me, unlike Ven. Lobsang Kelden’s heartwarming experience [Mandala August/September 2007]. Maybe it’s my age [the writer is in her early 30s], but I often get cat-calls. It’s as if people feel affronted that I have this religious dress on. When I am with others of my age, who are not Buddhist, I often feel like I am an alien.

Before I was a nun, I was familiar with relating to men in a certain way. After ordination I had to completely change.  I didn’t understand this aspect properly until after ordination, so for my first years as a nun it was quite confusing. One day you are viewed as an object of attraction, the next as an object of ridicule. Normally when we learn or experience things, the change is gradual, but when you become a nun it’s very sudden, literally from one day to the next – like growing old in one day, rather than gradually over a lifetime. I sometimes feel serious identity confusion when I have to deal with normal householder requirements in the West – banking, shopping and so on – while wearing robes.

My experience is that people, even complete strangers, impute a lot on what I should be doing and how I should be. By donning the robes I am making a public statement, and thus become public property. This can bring stress. But although the unexpected challenges I have experienced took me by surprise, of course there have been incredible benefits as well, and I feel so fortunate to still be a nun. I think the biggest thing I have learnt is trying to be honest with myself in all aspects and a little gentle, rather than to try and be something that I am not.

Often families can feel deserted when one of them gets ordained (although this is not my experience, thankfully) and so there can be no support coming from loved ones, or comments like,  “Oh, you won’t have children!! Or, “It’s just a passing fad.”

The number of FPMT sangha has stayed pretty constant at around 300 in the last fifteen years – about the same number ordain as disrobe. This is a sign that it is not growing: why? Many Sangha who ordained in the early 1970s have stayed ordained, and possibly that could be because of the foundation they received in the lam-rim, and by living together at the “Injie Gompa”.

One of my teachers recently said to me, “Just wake up each day and say, ‘Today I will be a nun.’” In this way I am taking it one day at a time.

The Catholic nuns’ community had similar difficulties to those that our community faces today – a more secular society, an aging population, etc. – but the one sentence that captured my attention and intrigued me more than anything was ever so simple: Each of the nuns who were out working (for the diocese) in teaching positions, etc., were supporting 2.7 members of their community.

I have often noted that Lama Zopa works in mysterious (and sometimes very unconventional) ways, and I believe it was due to his kindness that I happened to read this particular article on this particular day. This singular simple fact of community opened my mind to propel a tremendous shift that could help the community of monks and nuns whom I was asked by Rinpoche, only a few weeks before, to serve. The insight has given focus to the main task as the path begins to take shape.

Having some experience as a monk living in a residential center in the West, I had already formulated thoughts on the vulnerability we face in a culture that does not value (i.e. support) the decision we make in becoming monks and nuns. But I also needed to hear from the rest of the monks and nuns in the larger world community about their experiences and their situations: the difficulties and the priorities. A survey was compiled, providing an in-depth look at the individual situations for members of the community: those living in community and those on their own. With a fifty percent response rate, the results seemed credible.

By chance, in serving my teacher Ven. Geshe Ngawang Dakpa I also had the opportunity to travel to many parts of the world and meet with my fellow Sangha members; to talk to them in person and listen to their stories. I have also taken the time to discuss the Sangha with staff at FPMT international office, teachers (and abbots) within the FPMT mandala of centers, my predecessors who served the IMI community, as well as Lama Zopa Rinpoche.

And I went back to the beginning! What did Lama Yeshe say when he started this IMI thing? What did he really envision for the community of monks and nuns…?