Sacred Sites Around the World

Manifestations of the capacity of human potential, sacred sites around the world attract millions of pilgrims. Many of these great monuments took decades, even hundreds of years to complete and all of them used the greatest artists, architects and craftsmen of their day. 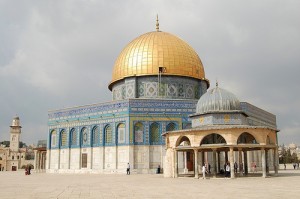 Israel: The Temple Mount, upon which sits the Dome of the Rock, is sacred to three of the world’s main religions: Islam, Judaism and Christianity. For Muslims, the mount marks the point where the Prophet Mohammed began his ascent to heaven. Muslims constructed the actual dome in the7th century. According to Jewish tradition, Abraham prepared to sacrifice his son Isaac there, and later, Solomon built his temple there. For Christians, the Temple Mount is revered for its place in the life of Jesus Christ. 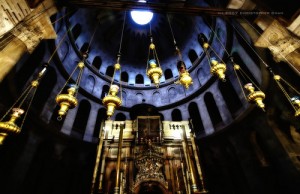 The Holy Sepulchre is a cave-like tomb where Jesus Christ was buried in Jerusalem. The Emperor Constantine built a church over the spot in 335 CE; the building also covers the hill, Calvary, where Christ was crucified. It is one of Christianity’s most sacred spots. 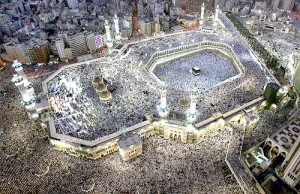 Saudi Arabia: Mecca, the holiest city of Islam, is the birthplace of the Prophet Muhammad. Throughout the world, devoted Muslims turn toward Mecca in prayer five times a day, and it is a Muslim tenet to make a pilgrimage (hajj) to Mecca once in their life. Non-Muslims are not allowed to enter its gates. Approximately 2 million Muslims arrive during the last month of the Islamic calendar for pilgrimage. 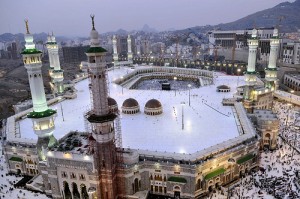 The Great Mosque is the holiest site in the city; inside it is the Black Stone, central to worship during pilgrimage. 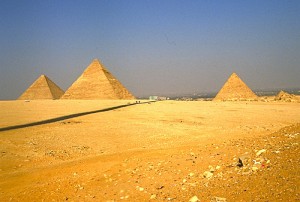 Egypt: The Giza Plateu, part of the ancient necropolis of Memphis, is the site of the famous pyramids of the Sphinx. The sphinx, carved around 1555 BCE, stretches 241-feet (73.5-meters) in length and 65-feet (20-meters) in height. Out of the three principal pyramids on the plateau, the pyramid of Khafu stands at 450-feet (137.2-meters). 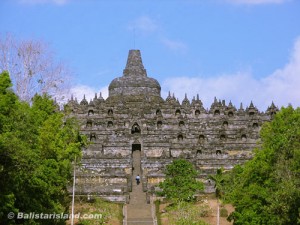 Indonesia: Borobudur Temple in Java, one of the most famous Buddhist monuments, was built by the Sailendra dynasty between 750 and 842 CE. Details about the early history of the temple are scarce, although it is commonly believed to be Java’s spiritual center of Buddhism for about a century and a half, after which it was lost until its rediscovery in 1814. The entire temple is shaped like a lotus composed of 55,000 square meters of lava-rock, and the ten levels of the temple represent the ten stages bodhisattvas must go through to reach the highest state of enlightenment. 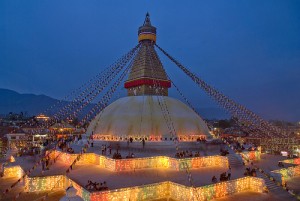 Nepal: Bouddhanath Stupa in Kathmandu, one of the biggest stupas in the world, has been the center of a flourishing community of Tibetans since their exile fifty years ago. Monasteries abound, and Bouddha draws thousands of pilgrims annually from around the world. 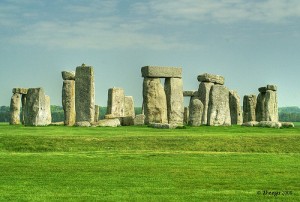 England: The unusual structure of Stonehenge in Wiltshire draws curious tourists and pagans, even though its ancient uses aren’t clear. Although ideas about what it was used for range from Druid worship to Viking ceremonial spot to alien landing field, current theories are that is was a type of temple. Stonehenge consists of a series of earth, timber and stone structures that were revised over more than 2,000 years. The earliest part of the complex dates to approximately 3100-2300 BCE. 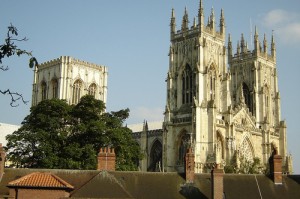 York Minister Cathedral was built more than 1,000 years ago, and over 2 million people visit every year, whether as tourists or pilgrims. Salisbury Cathedral has the highest spire in England at 404-feet. Construction of the cathedral began in 1220, and the final steps of construction weren’t finished until ninety years later, in 1310. This was considered fast construction by medieval standards.

St. Paul’s Cathedral in London, a Norman-style structure, was started in 1087 and completed in 1310. After the Great Fire of London in 1666, Sir Christopher Wren was commissioned to rebuild it; the St. Paul’s that is famous today is his work. Its dome is considered one of the great domes of the world.

Also in London, Westminster Abbey was once a Benedectine Monastery and is one of England’s most important gothic structures. The first church on the site was from the 7th century, it was Henry III in 1245 who initiated construction that went on for centuries. Most English kings and queens have been crowned in Westminster, and several notable people have been buried there. The cathedral’s Poets’ Corner houses the tombs of Chaucer, Tennyson, Browning and other famed English poets. 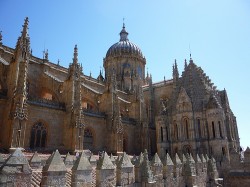 Spain has its share of magnificent and grand-scale architecture. Salamanca has two cathedrals: the old one, founded in 1100 by Count Raymond and still not finished by the 13th century, and the new one built in 1508 right next to the old cathedral. This “new” cathedral was started in 1560 and completed in 1733. 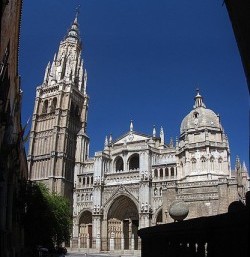 The Toledo Cathedral, which stands at 393-feet (120-meters) high, is originally gothic in style but several new styles have been added with a succession of memorial chapels. Started in 1226, it took more than 80 years to complete.

In 1882, Antoni Gaudi began work on his unique surreal church in Barcelona, the Sagrada Familia. He devoted more than forty years of his life to its creation. He died in 1926 and the church remains unfinished and, amid controversy, continues to be worked on. 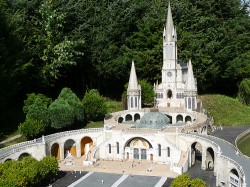 Our Lady of Lourdes, France

France: Lourdes, a small town in the foothills of the Pyrenees in southern France, draws 5 million visitors every year to the Our Lady of Lourdes sanctuary. In 1858, the Virgin Mary appeared in a vision eighteen times to Bernadette Soubirous, a young peasant girl. After revealing herself as the Mother of God, she asked that a chapel be built on the site and told Bernadette to drink from the fountain in the grotto. Although she couldn’t see a fountain, Bernadette dug at a spot and the spring began to flow. The water still flowing from the spring is believed to have remarkable healing power and has become the most famous modern shrine of the Virgin Mary. 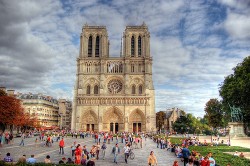 The Rouen Cathedral (a city noted for being the subject of Monet’s paintings and where Joan of Arc was burned to death) is a famous gothic structure that was started in 1000 CE and completed in 1063. Another French gothic masterpiece is the Notre Dame Cathedral in Reims, which was built in the 13th century. Construction took more than a century to complete. Despite heavy damage during World War I, the building was nicely restored. 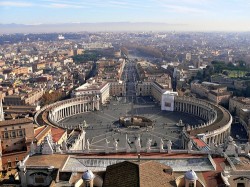 Italy: Vatican City in Rome, an independent state of Italy, has been the residence of the Pope since the 14th century and is the seat of the central government of the Catholic Church. The papal palace, Saint Peter’s Basilica, and the famed Sistine Chapel draw millions of visitors every year.

The Sistine Chapel, the private chapel of the Pope, could stand alone as a pilgrimage site because of the famous ceiling paintings of scenes from the Bible by Michelangelo. 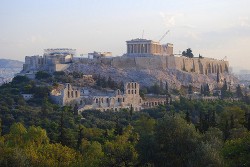 Greece: The Acropolis sits on a steep hill overlooking Athens and supports several temples and buildings. Scientific findings indicate it has been used since Neolithic times as a source of feminine power and devotion. 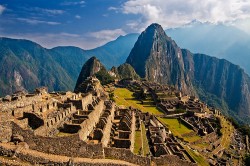 Peru: Machu Picchu, an ancient Inca fortress in the Andes Mountains of Peru, thought to have been built and occupied from the mid-15th century, is surrounded on three sides by stepped agricultural terraces, which are connected to the main plazas and buildings by thousands of stone steps. 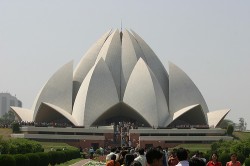 The Lotus of Bahapur, India

India: The Baha’i faith, which centers around the three principles of “oneness of mankind, oneness of religion and oneness of God,” constructed the Lotus of Bahapur temple in New Dehli in 1986. The temple took 6 years and 8 months to complete and is visited by over 4 million people annually. Since its 1986 inauguration, more than 50 million visitors have walked through this temple, which is shaped like a half-opened lotus. 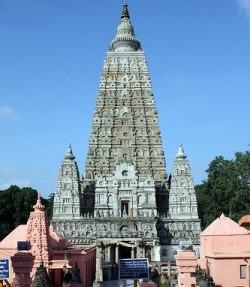 Already famous for being the place of enlightenment of Lord Buddha, Bodhgaya is home to the Great Stupa which was built next to the Tree of Enlightenment, under which Buddha sat in meditation until he reached liberation. Today’s tree is a descendant of the original tree. 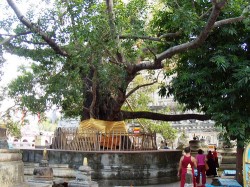 The Tree of Enlightenment, India 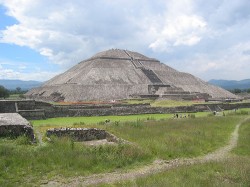 The Pyramid of the Sun, Mexico

Mexico: The ancient city of Teotihuacán, was laid out as a symbolic sacred landscape, and is dominated by the Pyramid of the Sun and Pyramid of the Moon. The sun pyramid was built over a natural cave that had four chambers believed to be used in shamanistic rituals. Teotihuacán was one of the largest cities in the ancient world and had a population of more than 100,000. 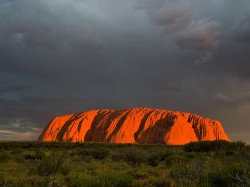 Australia: Uluru (Ayers Rock) is the world’s biggest sandstone monolith and reaches up 1,043-feet (318-meters) and has a circumference of 5.8-miles (9.4-kilometers). Standing in the middle of red desert in the heart of Australia, it is surrounded by a number of sacred sites that are closed to the public. It is especially sacred to the Aborigines, who believe the area around it is inhabited by ancestral beings whose activities are recorded at different sites. This energy source (“dream time”) can be tapped into and one can access the records of particular ancestral beings from their birth to their death. (Lama Zopa Rinpoche has said that Uluru is the abode of protector buddhas.)