The Lama Yeshe Wisdom Archive collects advice from Lama Zopa Rinpoche on many topics in the form of short talks or letters to students. Here are a few responses dealing with fear. Many more can be found online at http://www.lamayeshe.com/advice/lama-zopa-rinpoches-online-advice-book 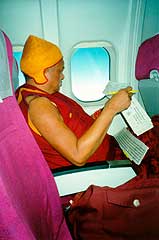 A student was afraid of flying

Just before departure and during the flight, it is very good to recite the names of the ten directions’ buddhas. If you keep on reciting the names, in whichever direction you are flying, if you recite that Buddha’s name and pay one-pointed attention to this, not only will you be free from danger, but your wishes will be fulfilled. So not only is this for safe travel, but for the successful fulfillment of whatever goals you had for going in that direction.

It is very good to pray not just for your own safety, but on behalf of all the people in the airplane – all 300 passengers and crew, or however many people there are – for them all to have a safe journey. Not only that, but you can pray that whoever this airplane carries may always be safe. It’s very good to pray like that.

A German woman had had a fear of snakes since she was a child. At the age of nine, she saw a smashed snake in her parents’ garden, and another woman in Germany, who was clairvoyant but not Buddhist, told her that in a former life she had destroyed people.

You do not need clairvoyance. This is explained by karma. In a past life, after dying because of a snake killing you or dying out of fear of snakes, this often goes into the next life.

Some beings are born in a shape that gives fear to others. It is just like that. Often it is a result of anger. You did some unpleasant things to others, and now you fear the result.

Even I would run away when I see a snake. That is normal.

Think of the suffering of the snake: It has no chance. If it had a choice, it would take another form. The snake itself has a fear of eagles. Use the snake to generate compassion and to develop bodhichitta. If you had the opportunity, you would also choose another body, not a body that nobody likes. Snakes are very afraid; they hide themselves and disappear as soon as someone comes close.

FPMT is unbelievably fortunate that we have many qualified teachers who are not only scholars but are living in practice. If you look, then you can understand how fortunate we are having the opportunity to study. With our Dharma knowledge and practice we can give the light of Dharma to others, in their heart. I think that’s the best service to sentient beings, the best service to the world.