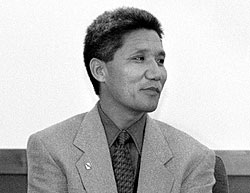 Scholar and chief translator for His Holiness the Dalai Lama, Thupten Jinpa urges scientists who are studying Buddhist meditation to give respect to the voice of the tradition itself. He argues that, at least in the case of Buddhism, without taking seriously the tradition’s own self-understanding of the role of meditation, this encounter between Buddhist meditation and science will not have the significant mutual enrichment it could otherwise potentially have.

We tend to forget that “meditation” is actually an English term and that, when applying it to convey a core element of Eastern spiritual practice, such as that of Buddhism, there might involve an unrecognized conflation of meanings. In the classical Buddhist context, however, the term meditation is used to translate the Sanskrit term bhvana and its Tibetan equivalent gom (spelled sgoms). Etymologically, the Sanskrit term connotes the notion of “cultivation,” while its Tibetan equivalent gom carries the idea of developing “familiarity,” together implying the idea of some kind of repetitive process of cultivating a familiarity, whether it is with respect to a habit, a way of seeing, or a way of being. In its actual usage, however, the term gom is applied not only to the process of “cultivation” or “development of familiarity,” it is also applied to the resultant states achieved through such processes. So, in this sense, meditation can refer both to the practice of disciplined cultivation as well as the cultivated result of such a discipline.

Given this broad definition of meditation, we find mentions of different types of meditations in the classical Buddhist texts.

For example, there is the classic mindfulness meditation, wherein the individual learns to pay deep attention to the minute processes within the flow of his or her breath or mental processes, while remaining undistracted by other sensory or discursive thought processes.

Then there is the meditation in the form of taking something as an object, such as when the person takes the fundamental truths of one’s condition like the utterly transient nature of one’s life, for instance, as the object of deep contemplation.

There is also the practice of meditation as visualization or simulation, such as where the person visualizes himself or herself as going through the various stages of the experience of dying.

In addition, there is the meditation in the form of prayer where, for example, the meditator aspires to attain the enlightened attributes of the Buddha for the sake of bringing about the welfare of countless sentient beings.