The Bodhisattva on Bascom Hill 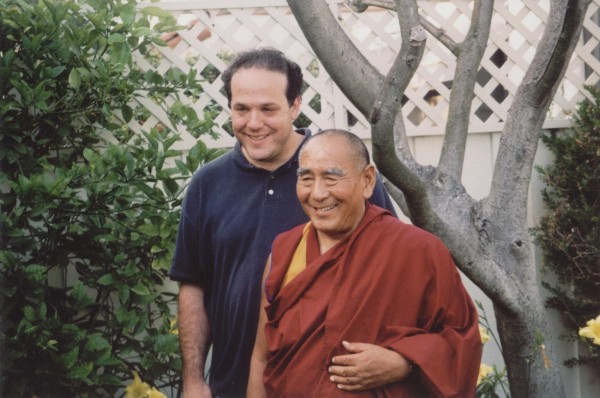 The first time I met Geshe-la was about 20 years ago, not long after receiving notification that I had been accepted for graduate studies at the University of Wisconsin. The university had established the first doctoral program in Buddhist Studies in North America back in 1962 and Geshe-la had been a faculty member there since 1967. I was attempting to decide between two potential schools and wanted to visit the campus and meet the person who would be my Ph.D. advisor. Geshe-la told me to come by his office around noon. On that day, I walked up Bascom Hill, made my way to Van Hise Hall, and up to the twelfth floor where Geshe-la’s office and the Department of South Asian Studies looked out over Lake Mendota and the west side of Madison. I knocked on the door and he said, “Come in,” with his soon-to-be-very-familiar and cheery Tibetan accent. I opened the door and saw his warm and inviting smile. He came across as very humble and approachable. His presence was infectious. This was the former debate examiner for His Holiness the Dalai Lama, arguably the top Tibetan scholar of Buddhist philosophy in the world, and teacher to many tulkus, lamas, geshes, top Western academics, and thousands of Dharma students around the world; and he could not have made me feel more comfortable. I knew I had found my teacher.

The scene proceeded in a way that will immediately be familiar to dozens of his graduate students over his three decades at the university: he slid half of his lunch (a sandwich and apple slices) across the table to offer to share them with me. I came to learn over the years that he did this virtually every day with one or more of his students with whom he was reading a text or discussing points of doctrine over his lunch hour.

Geshe-la instilled confidence at every turn. As humble as he was, there was never any doubt about the authority with which he taught Buddhist philosophy. He always encouraged us to question ideas, but he did instill some fear when he would throw out a question in a philosophy seminar that was intended to reel in a debate partner. “Who thinks production and disintegration are simultaneous for Dharmakirti?” No matter what the student opponent would say in response to his questions, they were in trouble. They were about to debate with the master. But it was an intellectual trouble that always served to sharpen their minds (and the minds of others in the class) and deepen their understanding. We all knew that he was a master teacher. One need only look at a short list of his students (Jantse Chöje Lobsang Tenzin Rinpoche, Lama Yeshe, Lama Zopa Rinpoche, Sera Je Khensur Geshe Donyo, Jeffrey Hopkins, José Cabezón, John Makransky, etc.) to witness the fruits of following his instruction.

Geshe-la’s mind is razor sharp. In 20 years of receiving teachings from Geshe-la on a wide variety of topics, I never saw him pause with uncertainty. I never saw him hesitate for a moment to answer a student’s question. It was always as if he knew it was coming and was just waiting for the prompt to give his response.

When teaching he often would quote Indian or Tibetan master’s texts that he had memorized in order to support or help illuminate a point. The Tibetan tradition of memorizing texts is well known. But with Geshe-la, it was something extraordinary even in that context. He would regularly quote texts from memory that were well outside the standard texts required to be memorized in the geshe curriculum. Not only would he cite texts broadly from the Gelug and Indian sources, but also from other Tibetan lineages of thought and a wide range of Indian sources as well. Let me give an example to illuminate this point.

When I was near the end of my Ph.D. and was getting ready for my formal dissertation defense, I had a meeting with Geshe-la to go over some last remaining points and issues. Often when a doctoral student gets to this point they are more knowledgeable than even their doctoral advisor on their dissertation topic. I had translated and was writing on Shantarakshita’s The Ornament of the Middle Way (Madhyamakalamkara). Though it is certainly mentioned and discussed in Gelug literature, the text and its commentaries are not a part of the standard geshe curriculum in the Gelug tradition. So when I sat down with Geshe-la and argued for an interpretation of a particular point in Shantarakshita’s writings that stretched a bit outside the traditional limits of the standard Gelug presentation of that point, I (naively) did not think Geshe-la would have ammunition to argue with me on the point. I was mistaken! I had Shantarakshita’s root text opened in front of me and Geshe-la did not have a copy of the text in front of him (he had given me his personal copy as a gift when I began work on the dissertation). He heard my point and without missing a beat began his counter-argument by quoting stanzas from the root text word-for-word from memory as I read along in the open text on the table in front of me. He went on to elaborate on its subtle and implied meanings and then to argue his own point of interpretation which was incredibly profound and insightful.

Suffice it to say I did not have the luxury of knowing my dissertation topic better than my doctoral advisor. But not having that luxury is just one small example of the extraordinary gift it has been to study closely with Geshe-la for 20 years. Geshe-la is a teacher in all the best and most meaningful senses of the term. He is not only an incomparable scholar of the tradition, but he thoroughly embodies and exemplifies what he teaches. Everything I know or understand about Buddhism is thanks to Geshe-la’s kindness, skill, wisdom, compassion, and as he was so aptly named, “spontaneous patience.” I pray that I have the merit to be his student again in future lives.

James Blumenthal, Ph.D. is an associate professor of Buddhist philosophy at Oregon State University and professor of Buddhist Studies at Maitripa College. He is the author of The Ornament of The Middle Way: A Study of the Madhyamaka Thought of Shantarakshita along with more than 40 articles in scholarly journals and popular periodicals on various aspects of Buddhist thought and practice. He recently finished work with Geshe Lhundup Sopa on Steps on the Path: Vol. IV, a commentary on the “Shamatha” chapter of Lamrim Chenmo by Tsongkhapa which is forthcoming.