By His Holiness the Dalai Lama 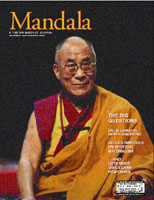 At a three-day teaching in California earlier this year, His Holiness the Dalai Lama was asked a question about death and how to prepare for it. This is his response:

When we speak of death as a phenomenon from the Buddhist point of view, it is understood to be the moment when all the gross levels of mind, the various levels of consciousness, have eventually dissolved into the clear light nature of mind, which is the most subtle level of consciousness.

So in a sense, we can see that our existence is characterized by this continuing cycle of the consciousness moving through an extremely subtle level to a comparatively less subtle level to a gross level, and then dipping down through a reversal process of subtlety and so on. When we go to sleep we have this deep sleep, and then it rises from there into the dream state, and from there to the waking state, and then back to the sleep state, dream state, and so on.

Even in our day-to-day life our consciousness goes through these transitions of different levels of subtlety. Death marks a big point when consciousness has finally dissolved into the most subtle level of its existence. When the new rebirth occurs, then it again reverses the whole cycle…