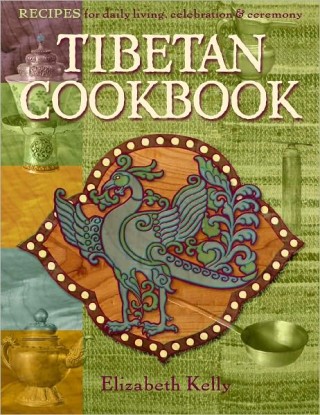 A sense of community, comfort, health, and well-being are prominent on the ingredients list when it comes to Tibetan cooking. Elizabeth Kelly’s new book, published by Snow Lion, is a deliciously practical paean of love – for food, for family, and for the Tibetan people. Here is an excerpt:

My husband Gala [is] a carpet master from Eastern Tibet. Traditionally, Tibetan men are not cooks, but during his childhood in a refugee settlement in the northern wilderness of Nepal, he had learned many skills, among them cooking. He promptly saw the advantage of teaching me his favorite dishes and techniques …

Gala has told me many stories over the years of the times when food was not readily available. His mother had to trade her jewelry and traditional hair ornaments for food. The story of his family’s three-year journey on foot, running for their lives from the Communist Chinese army, is a poignant one. During his family’s transition from impoverished circumstances in exile to the relative security of the modern world, food has been central to survival, both physically and spiritually. As he says, “People practice Dharma when they have food enough.”

Gala’s family comes from the eastern part of the Tibetan plateau where tribal peoples have lived for generations, managing herds of goats, sheep, yaks, and horses. Everything that was needed – food, clothing, and shelter – derived from the animals. The diet consisted of dairy products: milk, butter, various forms of dried cheese, and yogurt, as well as dried meat and the roasted barley flour called tsampa. Every moment of the day was spent in some aspect of survival and maintaining the food supply, beginning each morning with milking the animals. Families moved alongside their animals to different grazing areas on a cyclical basis. During yak caravans stretching over several months, the staples not grown in the region were obtained through barter. Wool and butter were traded for barley, salt, and tea.