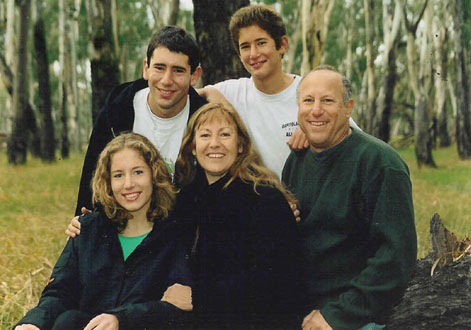 Back: Jhana and Kelden. Front: Arya, Pam and Karuna Cayton.

I lived in Nepal from 1975 until 1988, mostly at Kopan. I loved my lifestyle, but early on Lama Yeshe encourage me to marry Pam, whom I met at Kopan in 1978. I thought, “If I get married, that means I’ll end up having children. If I have children, that means I am a father. And if I am a father, that means I have a family.” It was a logical conclusion that I was not all that thrilled about. Having children means being a father, and “fathers” don’t work full time in a Dharma center, particularly in a third world country. “Fathers” don’t do meditation retreats during the monsoon. Fathers don’t attend long teaching courses, or any teaching courses, because they go to work to earn money to support their family. Yuck.

I was able to fool myself into thinking not much needed to change as far as the lifestyle I had been living until my first son was born in 1985. In 1987, when my daughter was born at home in Kathmandu, reality began to set in. The sinking feeling that I was doomed to a life of slave labor began to become a reality. About a year and a half later we were heading to California to start our new life. My second son, third child, was born in 1990 at our home in Santa Cruz, California. So I have three children, two sons who are 20 and 14, and a daughter 18 years old.

After returning to the United States in late 1988 I attained my Master’s Degree in clinical psychology and became a licensed psychotherapist. So, I now was supposed to be the expert on fathering. But the real experts are my kids. The value of my ideas about Buddhist fathering can really only be based on the results and impact upon my children.