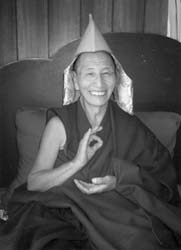 The Kalachakra is one of the most profound of all tantric systems, and Ven. Kirti Tsenshab Rinpoche is one of its principal proponents and lineage holders. In August 2004, Rinpoche offered the Kalachakra empowerment to some 300 people at Land of Medicine Buddha in Soquel, California. Shortly afterwards, Rinpoche granted Jon Landaw an interview.

JL: To begin with, what is the significance or importance of Kalachakra?

And when we talk about the inner Wheel of Time, focusing primarily on the movement of the winds as we breathe in and out, because the wind (prana) is regarded as the mount of the mind, the changes emphasized here – the purification mainly being talked about – involve the transformation of the mind.

Although the Kalachakra is similar to other tantric practices in that all deity practices involve the purification of these three doors of body, speech, and mind, what is special about Kalachakra is that it is far more intricate and detailed than you would ever imagine knowing the other tantras. To give some sense of this highly detailed system, consider the way in which time is measured. According to the Kalachakra, there are a certain number of breaths that make up one day and night, and then a number of such days in a week, in a month, and in a year. In the inner and outer Kalachakra, the number of meditational deities generated by the practitioner correspond to all these divisions of time.

For example, according to Kalachakra, each month has thirty days, so that there are 360 days in the 12-month lunar year. As part of the practice of Kalachakra, you visualize a corresponding number of deities located at various points within your body. Just as there is an outer Wheel of Time established upon the sun, the moon, and the various planets, so there is a corresponding inner Wheel of Time established on the basis of the various constituents within your body, visualized as deities…