The Movement for Peace with Justice and Dignity

NEWS FROM A BUDDHIST PERSPECTIVE

Within the FPMT mandala, there are many practitioners witnessing first-hand the violence, suffering and chaos that result from war, poverty, crime, corruption and other destructive social forces. In Mexico, the trafficking of illegal drugs has wrecked havoc on Mexican society. Karla Ambrosio, FPMT’s national coordinator for Mexico, shares how the teachings of Buddha are offering peace, insight and direction to those impacted by this violence and how a movement has developed that calls for compassion and love instead of retaliation and hate. 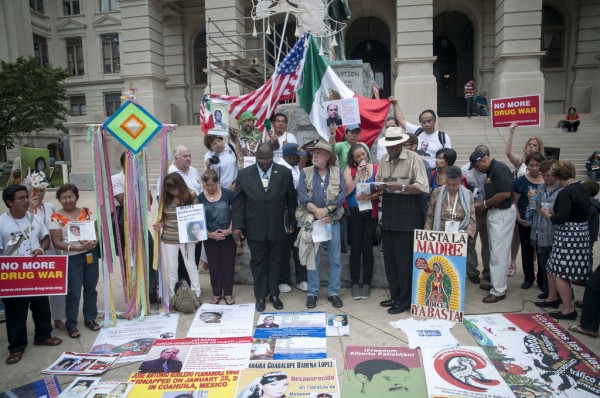 Early in the morning, the doorbell rang, upon answering it a voice said: “Hi, I’m Rafa, I came to meditate.” Last night, Rafa had learned about Thubten Kunkyab Study Group in Coapa, Mexico, and showed an interest in learning how to meditate.

Rafa is the brother of Juan Carlos and their lovely mother is Doña Mary, who is looking for her four lost sons. Two years ago, Jesús and Raúl made a journey from Michoacán to Guerrero on the Pacific Coast of Mexico, where they were kidnapped. A year later, Gustavo and Luis disappeared in Veracruz on the Atlantic Coast. The four brothers used to travel to maintain the family business. They are four of the 10,000 desaparecidos (missing people) and the 70,000 murdered when the war against drug trafficking began in Mexico in 2006.

Doña Mary and her sons Rafa and Juan Carlos are members of the Movement for Peace with Justice and Dignity, a citizens’ movement that was born in 2011 when a Mexican poet named Javier Sicilia raised up his voice after his son was murdered and said fearlessly: “No more blood! We are sick and tired!” The poet invited Mexican citizens to join a peaceful walk from Cuernavaca to the Zócalo in Mexico City [about 68 km, or, 42 miles] to join in a National Pact, a collection of public demands to better address the widespread violence associated with drug trafficking.1 On May 8, 2011 more than 70,000 people got together and listened to Sicilia who referred to one of the most well-known Buddhist texts from the Pali canon:

We have not stopped beginning our speeches with poetry. This time, a year after the death of my son Juan Francisco and his friends, as well as the recent and horrible murder of another four students in Morelos, I would like to begin with some verses from the Dhammapada, one of the most sacred books in Buddhism, that refers to old age: “You are a house of bones / a house of flesh and blood / there abide pride and hypocrisy / abide decadence and death.” Because of the horror that has become the “old age” of our history, because of the pain that we carry for our dead and missing, in spite of everything, we have learned to follow with hope “those who have awakened / the seekers of the path / the transformed” and we have learned to continue “as the moon follows the path of the stars.”

After his speech, the poet asked for a minute of silence. With goose bumps and tears, a chorus of voices yelled: “No more blood, no more blood!” But, a few voices were also heard shouting, “Death for those responsible!” In that moment, the poet spoke firmly and calmly, “Brothers and sisters, this movement is peaceful, we do not want more death or violence.” 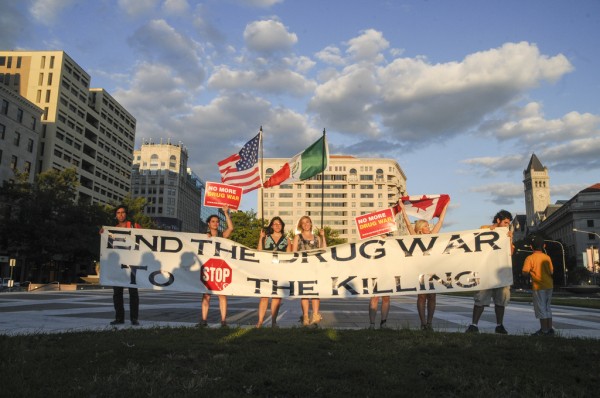 At that time I didn´t realize the magnitude of what was happening, how this movement would change my life, how the horror and pain of the war on drugs would change the life of millions of people around the world. Returning home, a warm feeling in my heart grew that understood the need to develop forgiveness and peace inside each one of us, and thus, together, achieve a true movement.

A year after, I was invited to coordinate a magazine to celebrate the first year of the Movement. The goal was to show how and why the Movement was born, where it’s going, and most importantly, to give voice to the families of the victims.2 During the editorial process, I realized that most of the members are really seekers of inner peace. They try to find an inner solution to external violence and understand that there is an authentic need to forgive and love those who show us violence, to keep  a loving and calm mind when others attack us, to discover that peace is possible and that it depends on us, to provide the example and inspire politicians to reconnect with their hearts and rescue a policy of kindness.

In one year, the Movement was able to establish the “Peace Dialogues” with the federal government. In the Chapultepec Palace, Javier Sicilia met with the current president of Mexico, Felipe Calderón Hinojosa as well as the four presidential candidates. The goal was forming agreements to transform the policy of war drug trafficking into a policy of human security. In other words, saving and protecting lives instead of taking them away and stopping the absurd war on organized crime that makes citizens vulnerable without resolving the real causes of crime and drug trafficking.

Sicilia and Enrique Peña Nieto, who began his presidency December 1, had a dialogue about the effects of this policy of war. At the end of the meeting, after Sicilia kissed Peña on the cheek, the poet said to him publicly, “I do not hear your heart; I do not hear it quiver with the victims’ pain. I hear a cold speech that terrifies, that terrifies all of us. I do not hear from you one word of mercifulness, of compassion in the face of so much pain.” Supporters of the Movement that were nearby say that at the end, Peña came back to Sicilia and said softly: “But I do have a heart” to which the poet replied, “So use it.”

To use the heart, to touch the hearts of others: this is the raison d’être of the recent Caravan for Peace with Justice and Dignity to the United States. Made up of more than 100 people, the Caravan visited 27 cities and impacted more than 415 million people in just one month.3 The bilateral agenda of the Caravan recognizes and emphasizes the interdependence between both nations and makes clear proposals regarding arms smuggling, money laundering, drugs prohibition, militarization of foreign aid, and criminalization of migrants. At the same time, the Caravan made it clear that no human-centered policy would be effective if we don’t recognize the pain of others. We should look at ourselves and develop an authentic determination and commitment to eradicate the root of suffering. That is why the Caravan got close to the people in the street, in order speak to the victims of our neighboring country as brothers and sisters, recognizing that that the damaging effects of this war are the result of bad policies and practices from both countries, and that they can be transformed.

Traveling with the Caravan for Peace I witnessed a potent example of compassion in action. The Mexican community in Chicago received the Caravan and invited them to have a dialogue in “Circles of Peace,” a space for opening the heart and healing practiced by indigenous communities. During one of these circles, two mothers, Teresa and Araceli, who had lost their children met, one a student and the other a federal police officer. Migrants with and without papers, people from NGOs, concerned citizens and former leaders of organized crime rings all met each other. In this exercise, Carlos, one such leader, confessed openly:

I am leader of a criminal gang that works in the United States. I have killed more than 200 people. When my community learned about this, they distanced themselves from me. The only person that stayed by my side was my mother, who forgave me for everything I had done and said that she believed in me, that there was no evil in me and that I could change. It’s because of her love and compassion that I am here now asking for your forgiveness as well. I have not separated completely from my crew, but I no longer spill blood. Now, I help my crew so that they too can stop killing and can begin another life.

Demonstrating outside of “Tent City” Jail, an extension of the Maricopa County Jail where many illegal migrants are held, Arizona, U.S. August 2012. Photo: uscaravana.com.

With her eyes full of tears upon hearing the confession, Teresa hugged Carlos and from the depths of their hearts, they asked each other for forgiveness. They realized that this absurd war creates lots of suffering for both victims and aggressors, and that the confusion can be healed with equanimity, understanding, forgiveness and the sincere wish that others be happy and never again experience any type of suffering.

So this is why Rafa came to meditate having returned from the Caravan. While in the gompa, he sincerely expressed his desire for inner peace and understanding:

Since my two brothers disappeared and after my two other brothers were kidnapped a year later, I have asked myself thousands of times, “Why did this happen to us? What did we do to experience this?” I see my mother, so loving, so noble, and I ask myself about it time and again. I think about my brothers, her life, her children, her family and I don’t find an answer. Now that we talk about the mind and its continuity, that gives me a possible explanation. I want to learn to meditate to remove the causes of this suffering and help others to do it.

Like Rafa, many victims found within the Movement look for peace with justice and dignity through meditation and compassion. I have learned profound and fundamental lessons from being on the side of the victims: integrity; the value of words; the capacity to transform pain into a love based in gratitude, selflessness and recognizing oneself in another, and that love into power; determination to walk together, putting oneself in the shoes of another; to act with wisdom and compassion; and to not stop until everyone achieves the causes to experience happiness and true peace.

1. Namely, to stop the war; to return those who have disappeared; to achieve justice and truth; to change the militarized, armed public security model into a human-, citizen- and community-centered model; to attack the real causes of this war, particularly in regard to an economic model especially catastrophic for youth, women and children; and finally, to promote political reform that will ensure more power for civil society in decision making.

2. Brújula ciudadana #34, featuring The Movement for Peace with Dignity and Justice

3. The Caravan visited the United States from August 12 to September 12, 2012. More information in English and Spanish: uscaravana.com and Caravan for Peace with Justice and Dignity.