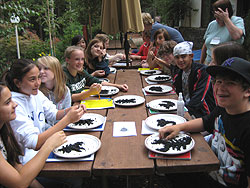 Vajrapani’s Family Camp in Boulder Creek, California has been going strong for fifteen years now. Unlike ordinary camps, where kids go off for the summer and parents stay at home, Family Camp includes everyone – parents and kids alike. There’s only one hitch: the kids can only participate up to age twelve. They have the option to become junior counselors, but they can no longer return as campers.

Parents of soon-to-be teens had voiced their concerns for the past couple years, asking if we could create a Buddhist camp for the teens. Many who are now teens had been coming to Family Camp for years. “Teens need this sort of camp even more than little kids,” a few of the parents said.

A small team – Anna and Lisa Landaw, Lois Audant, Sharon Gross and myself – took on the challenge and presented Vajrapani’s first-ever Teen Family Camp in July. Parents, led by Lois Audant, enjoyed their own “parent track,” which included a day of silence – something the teens loved and encouraged more of! The parents raved about Lois’s program and their work with the five elements/Buddha-families.

From the side of the organizers, what stood out most about the teens was their inclusiveness. Although two of the teens were brand new, they were easily assimilated into the group, which soon became inseparable – everyone taking walks together between sessions, sitting together at meals, playing card games – and no one was left out.

All twelve teens were enthusiastic about responding to Mandala’s request for feedback from young people. Here are some of their responses …