The Importance of Lam-rim and the War Against Delusions 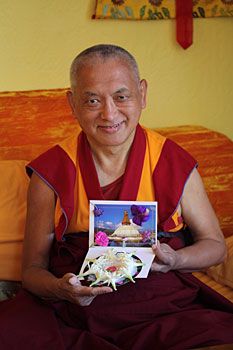 After being in retreat for 15 months, a student wrote to Lama Zopa Rinpoche for advice. This is Rinpoche’s reply:

[You are making] the best progress, because you see lam-rim deeper and deeper. This means that your retreat is benefiting your mind: your goal is to achieve enlightenment in order to enlighten all sentient beings. This is actually the only reason to live one’s life. Having this motivation, then whatever one does, walking, sleeping, talking, even having breakfast of Vegemite or French fries, is meaningful.

Also what we perceive as happiness often comes about as a result of committing negative actions, and this continues by leaving seeds of delusion, from which more delusion arises, and from that more negative karma arises, and this causes constantly the continuation of compounded suffering. So the more you see this – how being in samsara is like being in a fire and the suffering of that, or like drowning in a septic tank – the more one feels how unbearable this is. This, then, is a very good basis for developing samatha: One feels disgusted at the delusions, feeling they are very terrible, very deceiving; particularly attachment, which is like a poisonous snake that kills you immediately.

But even if one is bitten by all the snakes in the world, and even if one dies, still one is only separated from one’s body in this life. It doesn’t prevent one from being liberated, or being enlightened, or generating virtuous thoughts. Just being bitten and dying doesn’t cause one to be born in the lower realms: That is not the condition that causes that. It is delusions that cause one to be reborn in the lower realms. From delusion one creates negative karma, and that is the cause. So you can see that delusion is more dangerous than an atomic bomb, because delusions harm you, and harm numberless sentient beings: This is what has been harming you in the past already. If one doesn’t eliminate this, then it will continue to harm sentient beings, directly and indirectly, forever, besides harming oneself. …