This section of Mandala, Animal Liberation, features stories of your work to eliminate suffering for all sentient beings.

Please send your stories to michael@fpmt.org 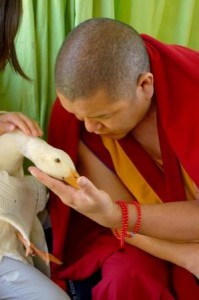 In 2008, we organized a big animal liberation in Mexico City. We liberated more than one million animals including all of the worms. On the same day of the liberation, during the morning, Geshe Gelek, Ven. Dawa, three Mexican students and myself went to the Sonora’s market in Mexico City, where you can get almost any animal you would like. We mostly got animals that were in very bad condition, as well as crickets, fish and doves. The santeros buy the doves to kill them in rituals of Santería, a practice that merges the worship of deities practiced mostly in Cuba but now has spread to other parts of world. At that time, I saw a santero buying a goat, to kill her in a rite of Santería. I approached him and ask him if I could put a blessing cord on the goat, but he replied that he couldn’t because it could affect the energy and so on. I asked him why he was going to kill the goat. He answered that it was because a person needs to expel some bad energy, and this is a method that we use. I tried to explain a bit about karma, telling him that in the long term, maybe killing another being, because it is a negative action, can’t produce a good result. He was open to listen to what I said. When I noticed that he was still going to take the goat, I told him that I was going to pray that he could find another job soon.

When I was walking back after talking with the santero, I saw Geshe Gelek in front of some ducks. Geshe-la really wanted to buy them, but they were expensive because they were “ducks for ornament,” as people have them in their gardens as a nice “decoration.”  With the money it costs for a few ducks, we could get many doves. But Geshe-la insisted that Ven. Dawa and I should get them because they were in very small cages and were in “terrible conditions.” We managed to get four of them with a good discount. When they were free, they were extremely happy and so were we. In the last big animal liberation we organized, even a Catholic priest sent a donation inspired by Lama Zopa Rinpoche’s advice for him to liberate 60,000 animals.

In January, Lama Zopa Rinpoche’s Mexican students wrote to Rinpoche in order to update him about all of the animals liberated in Mexico during 2008-2009. Their list was as follows:

Plus hundreds of thousands of small worms bringing the total to well over 1 million.

Lama Zopa Rinpoche has taught extensively on methods for benefiting sick and dying animals. Liberating Animals (book) and Recitations for Animals (CD) are both available through the FPMT Foundation Store.

The reason we are unhappy is because we have extreme craving for sense objects – samsaric objects – and we grasp at them. We are seeking to solve our problems, but we are not seeking in the right place. The right place is our ego-grasping.