On the Environment and Meditation 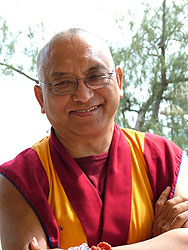 Regarding global warming, usually the real cause – karma – isn’t talked about. The reality is that nothing happens without it being related to the mind. People think this can be a natural disaster, but it doesn’t happen without a cause, and the main cause is karma.

Generally it comes from everyone’s karma, and of course there are conditions, such as pollution from the cars, etc. that we commonly understand. But we have to understand there IS a reason and that is our past negative thoughts and actions. There is so much negative karma created in the world – so many animals are killed and slaughtered, etc. For example, when a new disease is identified, and it comes from a chicken or bird or cow, then automatically millions of them are killed. If it were humans we would never think of killing. Even if one human has a virus we would never kill.

Of course we don’t normally talk of karma in a general situation regarding environment, etc. but it is important to educate people. For example, fifty years ago almost nobody in this world knew the word karma, but now many people know what karma means. So it is important to educate people. Another example: A very tragic situation such as many children killed in a shooting situation by another child, and everyone is horrified and shocked and can’t understand why. But this is due to karma. There is a reason that this happened, and it’s due to past negative thoughts and actions.

What I think is most important is to have qualified meditation masters taking care of the meditators in our retreat places, and taking care of the students who are sincerely trying to do retreat to actualize lam-rim. Just doing three years’ retreat doesn’t mean much, but meditating on the lam-rim is very, very important. What we need to do is to learn all the meanings, etc., from the Geshes; then we need to apply ourselves to the actual practice.

In order to realize these things, in particular within the Gelugpa tradition now, there are a lot of teachings, and then more teachings, and then more teachings again. Then the students think, “I know these subjects,” but they never meditate on them. So your mind and the Dharma have a big gap. So then one doesn’t get anything done; one doesn’t develop compassion. Even if one has all the intellectual studies, when problems arise, nothing is done so there is danger. One spends the whole life studying, but nothing is experienced in the heart. So there is a risk to be like this. Even if one has devotion but it can be like a cloud in the sky, easy to disappear. So, again another danger.

In the Gelugpa monasteries or centers there is so much learning, but not meditation. Meditation on the basis of learning is extremely important. I think if a Westerner can get realization, then that person would be a great inspiration to others.

Again, regarding the environment, anything well-proven scientifically is worth following through on. The main thing is to understand how things come to the mind, how things are dependent-arising, how things are the consequence of past actions. So the conclusion is that those people undertaking retreat, serious meditation, etc., can help the environment, can bless the earth, etc.

How to prevent global warming
To prevent global warming, the most important thing is to read the Sutra of Golden Light. This becomes a blessing to the earth and gives nourishment to the earth, similar to protein in food. Reading the Sutra of Golden Light not only blesses the earth, but also the whole country, city, house and also yourself. It also helps to reduce/stop violence.

Other things you can do to prevent global warming is to organize teaching on emptiness, reciting the Vajra Cutter Sutra, reciting the Prajnaparamita in 8,000 and 12,000 stanzas. There could be a group of people who read it; this would be very powerful for the earth. Also one could read the whole Kangyur – this also contains the Prajnaparamita. Reciting of the Prajnaparamita is the main one to purify and in order to have all the realizations; it cuts the root of all the sufferings – ignorance. This may be the reason why it comes out very beneficial to prevent and help stop global warming, because this is the result of non-virtue, which comes from the root: ignorance. All the unpleasant things such as earthquakes, global warming, tsunamis etc. all come from this.