The purification of Roger and Paula

The purification of Roger and Paula 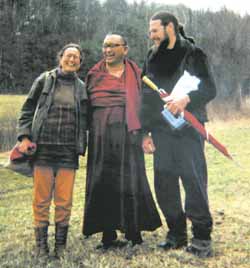 One of the basics of Buddhist practice is meditation. As Buddhism began to attract more and more Westerners, it became clear that Western meditators would be needed.

And so people like Roger and Paula Munro embarked on the adventure of a lifetime, of this lifetime, so they could, in their own words, “eradicate our negative selfish mind, generate a positive unselfish mind [with the goal of becoming] totally pure beings no longer subject to birth and death, whose omniscient emanations work effortlessly until every sentient being is free from all misery.” They have now spent the best part of their adult lives in retreat, meditating. This is their story, an abridged version of interviews that appeared in earlier Mandalas.

If you’re not worried about where your food’s coming from, and you’re not worried about where the money’s coming from or what happens to you day to day, then all you do is wake up in the morning, and do your sadhanas and guru yoga practices, feel your guru in your heart, and then think, ‘Today I’m dedicating my life to benefit sentient beings.’ You have faith that whatever happens that day is just what it is. And then, at the end of the day, you dedicate your merits.

Once you get started on this meditating, you just don’t want to do anything else. You look around and nothing else has much meaning any more. It’s not that I don’t want to help others in a more concrete way; if that presents itself, good. If Rinpoche said go do something, I would definitely do that. But he hasn’t said that. All he’s encouraged us to do is continue to retreat.

Roger: You don’t practice the hardships of retreat because you want to punish yourself or you’re bad and someone wants to punish you — it’s just a very nuts and bolts issue of time and space in one’s life. When you’re working solely for the happiness of this life and all its comforts and securities, life is taken up with those activities and very little time is left to actually practice in any meaningful kind of way. Not that these things — car, house, insurance — aren’t important, but at the end of the life your mind will be full of regret because you have to leave all those things behind.

It’s like when you’re sweeping a house, you’re looking for the dirt and you want to get it out of the house. That’s how you create the space in the mind for Dharma realizations to take root. Before it was overcrowded with the weeds of hatred, ignorance and greed — there’s no room for virtue to grow. You have to pull those weeds out and that’s always painful. Everyone goes through hardships to achieve what they want, not just spiritual people. Even rich people go though the hardships of dealing with family and the pressures society places on them.