The Dream: One Thousand Maitreya Statues 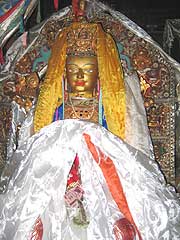 As progress on the 500-foot (152-metre)-high Maitreya statue in Kushinagar continues, other parts of Lama Zopa Rinpoche’s aspirations for world peace, via homage to Maitreya, are being fulfilled.

He explained that the building of Maitreya statues will not only bring world peace, happiness, and spiritual and economic prosperity, but individuals, families, and organizations who contribute to the building of a Maitreya statue will all receive benefits. He quoted the words of Buddha in the Sutra Requested by King Salgyal:

However many atoms there are in the stupa [or the statue] and in the statue of the Foe Destroyer, the Qualified Gone-Beyond One [Buddha], the person who built this will definitely achieve kings’ reign in deva and human realms equaling that number of atoms, will achieve the form and formless realm concentrations [based on shamatha] by completing the experience of all the perfect deeds and the ultimate state of enlightenment: that which is devoid of the sufferings of rebirth, old age, and so forth.

“This means,” said Lama Zopa Rinpoche, “that however many atoms there are in the statue, for that many lifetimes you will be reborn as a king in the deva or human realm. By being a king you have so much advantage. If you have met the Dharma and you also have worldly power, then you can help so many sentient beings materially to spread the Dharma and to cause others to practice the Dharma. You can help so many beings who are suffering, who are sick, and who are in poverty.”

Many monasteries in the Gelugpa and other traditions have large statues of Maitreya Buddha in their gompas. They are in the sambhogakaya aspect, which is of particular benefit for the Mahayana teachings because of the five definite attributes of the sambhogakaya, which are:

“Therefore, I thought to build 1,000 one-story or higher Maitreya Buddha statues in different parts of the world,” he said. “The more holy objects there are in the world, the more sentient beings will have the opportunity to be liberated from the oceans of samsaric sufferings and to achieve enlightenment.”

One of those large statues is already planned for the roof of an office building in Taiwan. And Lama Zopa Rinpoche recently arranged for a six-foot high statue of Maitreya to be built for the nunnery attached to Reting Monastery in Tibet. Reting is the place where Je Tsongkhapa wrote the famous Lam-rim Chenmo. (There is also a new 30-foot-high Maitreya statue in the main gompa of Reting Monastery. [see photo] )