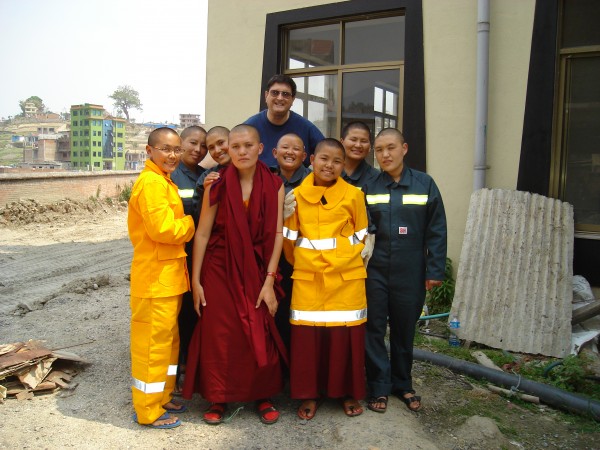 In May 2012, I spent one month offering training to the monks and nuns of Kopan Monastery and Khachoe Ghakyil Nunnery in Kathmandu, Nepal, in fire prevention and suppression, and in offering first aid to the injured. This was my second trip to Kopan to train “fire teams.”

My first trip was for two weeks in May 2011. It resulted from hearing about a small fire in Lama Zopa Rinpoche’s suite at Kopan, which took place in early 2011. As a volunteer firefighter instructor, when I learned of it, I asked my wife Ingrid (who is also the Buddhist in our family), “I wonder how they put it out and if anyone was hurt?” We communicated with Ven. Fran [Mohoupt] at Kopan, and my two trips resulted from those conversations. 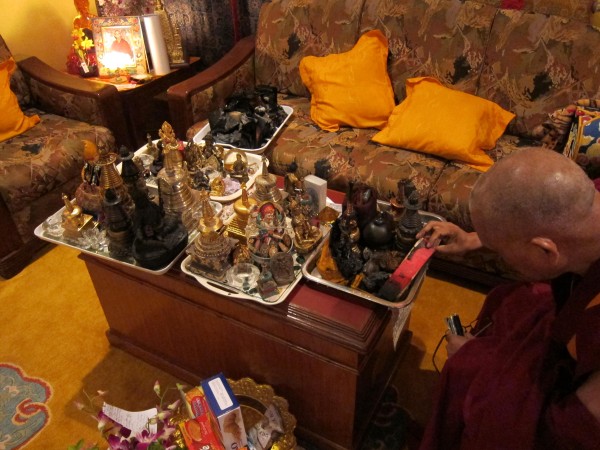 Rinpoche inspects the damage after a small fire in Lama Zopa Rinpoche’s suite at Kopan, which took place in early 2011.

The fire prevention trainings I offer cover the following points:

Since I don’t speak the language of most of the monks and nuns, I overcome the language barrier by doing a lot of show-and-tell type training. I also receive assistance from the English-speaking monks and nuns who interpret for me. (At the monastery, I think all of the young monks think my name is “Fire, Fire, Fire!” as they say it whenever I go past.)

At both locations, I have also trained the monks and nuns fire teams in basic fire fighting and in offering first aid to the injured. On both trips, the members of the fire teams were keen to participate and learn the knowledge and skills being taught. 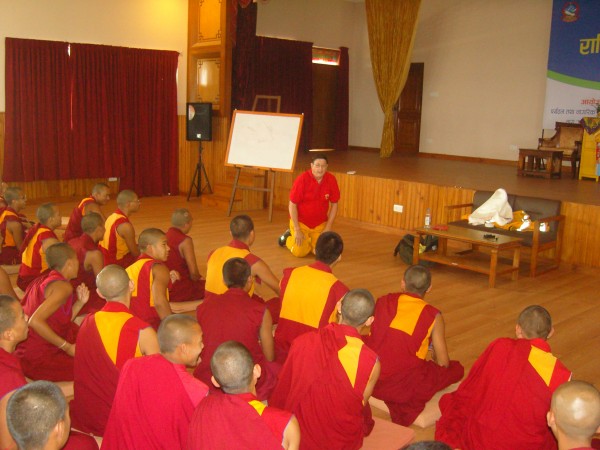 Tony demonstrates what to do when there is smoke: stay down low and go, go, go; May 2011 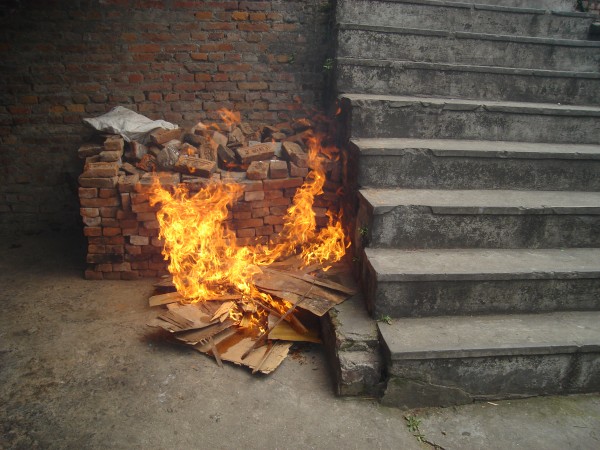 Live fire training at Kopan, May 2011 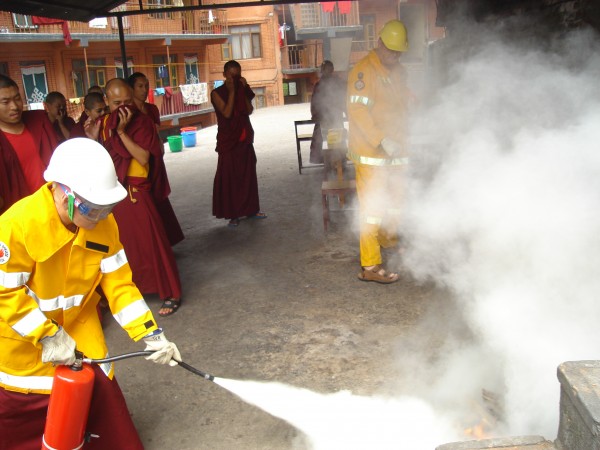 Ven. Tenzin demonstrate how to use an extinguisher during live fire training at Kopan, May 2011 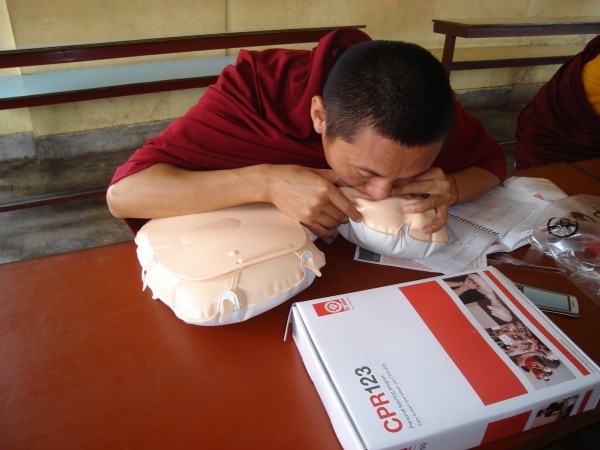 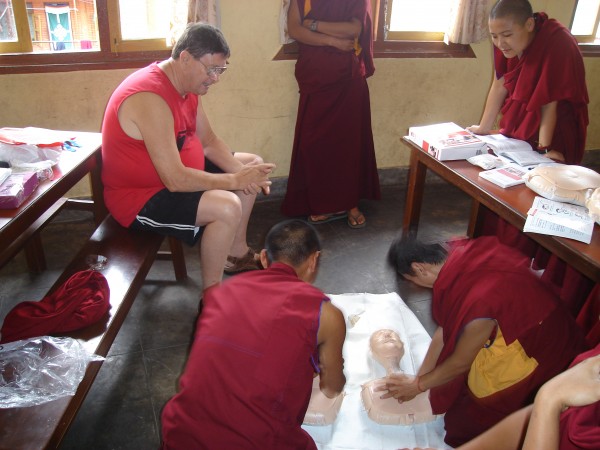 First aid and CPR training, onlookers learn by observation, May 2011

Before leaving Kopan, I had a meeting with the managers of the monastery and the nunnery and they showed their commitment and support for the fire teams by agreeing to purchase some knapsacks, more gloves and torches, and boots and socks as it is dangerous to fight fires in sandals and so forth. They also agreed to provide secure areas for “fire stations,” where equipment can be stored, and have a dedicated area for on-going training. 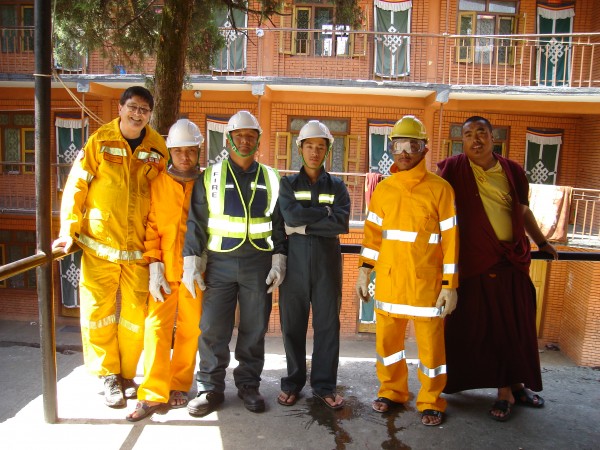 Many companies in the Perth-area of Western Australia provided training equipment, personal protective clothing and freight subsidies to support the trainings at Kopan:

Since arriving home, I have provided Kopan with a report of my visits and an on-going monthly training program for the fire teams. In addition to maintaining skills and knowledge for the fire teams, this will provide a basis for a risk management process. 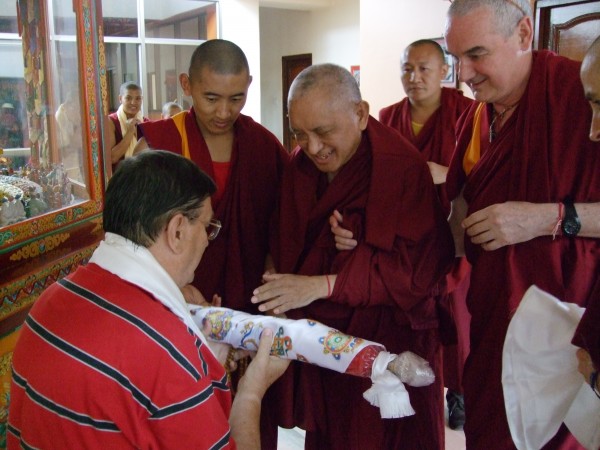 I feel very privileged to have had the opportunity to go to Kopan to promote the health and safety of the monks and nuns and to receive the blessings from the rinpoches. Please include fire fighters in your prayers that they may have the strength and courage to save life and property.

Anthony (Tony) Vickery-Howe is a volunteer fire fighter instructor in the FESA Bushfire Service of Western Australia. He has recently received the Third Clasp for a National Medal which recognizes 45 years of volunteer fire and St. John Ambulance service.

Tony lives in Rockingham, Western Australian, with his wife of 45 years, Ingrid, who is a dedicated Buddhist and who introduced Tony to Kopan in 2000. Tony describes himself as a “little bit Buddhist” and considers his teacher to be Khensur Rinpoche Lama Lhundrup, who told him to “learn compassion.” He reports he is “still learning.”

Tony and Ingrid have both retired from their careers in safety and mental health and are returning to Kopan in September 2012.

When I talk of being detached, what I mean is to be simpler, more easy-going. Detachment doesn’t mean totally renouncing everything. It means that you loosen your grip and be more relaxed.