THE HOLY OBJECTS OF FPMT 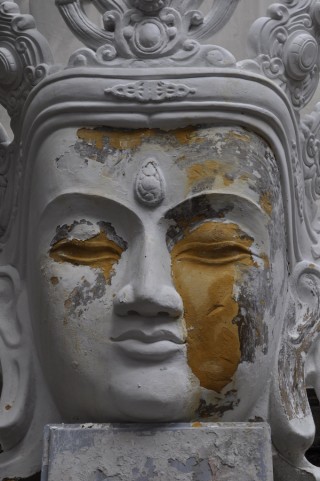 The bust of the Kundun Chenrezig, which is currently being repaired at Istituto Lama Tzong Khapa, Italy, 2012. Photo courtesy of ILTK.

In May 1996, in a small town in the Sahara, Morocco, famous American director Martin Scorsese and his Italian crew began to make a film – Kundun – about the life of His Holiness the 14th Dalai Lama.

With shooting in India and Tibet out of question, Scorsese and his production team decided that Morocco would be where they recreated the landscapes of the Tibetan plateau. When they arrived in the town of Ouarzazate, there were only two small hotels, a main street and plenty of dusty, unfinished houses. With this raw material, they created movie sets to represent where His Holiness was born and grew up.

In 1999, the large statue of Chenrezig that had been created by Dante Ferretti, the film’s Italian production designer, to help recreate the Potala Palace was brought to Italy to be part of an installation in Milan at Rotonda della Besana named “Tibet: Art and Spirituality.” The installation occurred during His Holiness’ visit to the country as part of the celebration of the 10th anniversary of his winning the Nobel Peace Prize. 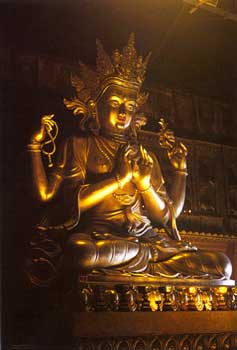 By 2012, the statue had made its way to Istituto Lama Tzong Khapa (ILTK) in Pomaia, Italy, and was displayed in the main square to awestruck residents. The giant sculpture, almost eight meters (26 feet) high, had lost some of its initial splendor as its last months in the Atlas Studio in Morocco had damaged its brittle polystyrene body. However, the extraordinary potential of the statue was clear from the beginning.

Last summer, we began a restoration project to prepare the statue for permanent display as a holy object. The ILTK restoration team decided to cover the statue with resins and fiberglass, an experimental technique not usually employed in sculpture, but rather for building boat hulls. In this way, the hope is that it will withstand the sun, wind and rain for many years. As a part of the work on this sacred symbol of perfect compassion, the polystyrene hands and steel core are being reshaped; damage is being repaired; clothing, jewelry and the iconic deer skin are being cast anew.

ILTK’s hope is that in June His Holiness will have the opportunity to bless the statue during his visit to the center.

You can find more information on the Chenrezig statue project on Facebook. 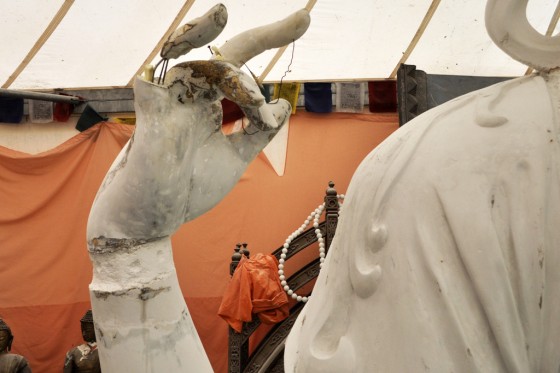 Damage to the Kundun Chenrezig will be repaired using resins and fiberglass, 2012. Photo courtesy of Istituto Lama Tzong Khapa.