It just may be that a bunch of teenagers have found the answer to that whole college/life/family stress thing – a quiet mind, and how to achieve it. Their week-long meditation retreat this northern summer at Land of Medicine Buddha in California gave them not only the respite they needed, but a new outlook on life. 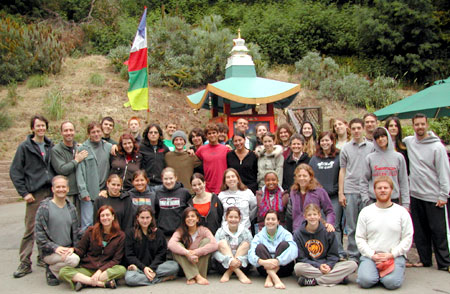 The summer 2005 group with their teachers and other staff.

According to one of the organizers, Tempel Smith of the Buddhist Peace Fellowship, the renowned Vipassana master Sayadaw U Pandita said back in 1989 that without a youth retreat, the Dharma would not flourish in the West.  U Pandita led the first teen retreat at the Insight Meditation Society (IMS) in Massachusetts that year.

Collectively, the teens say that the community feeling generated during these retreats is the best they have ever experienced, and that their friendships go deeper in six days than most friendships do in years.

Tara McRann, an 18-year-old high school graduate, discovered meditation about two years ago at the Berkeley Psychic Institute. When she read an article about Diana Winston [author of Wide Awake: A Buddhist Guide for Teens], she researched Diana’s work and in the process discovered the teen retreats.

“It’s amazing,” she said. “I really like being with people my age that have similar interests. Everyone is so friendly and loving and peaceful. Yes, it’s kind of intense, but I like being one of the older teens here: I don’t know if I could have done it when I was younger. It’s great just to sit with everyone meditating at the same time. That encourages me.

“I’d like to be disciplined enough to do it every day and to let myself learn from it. I’d like to send love to everyone I can, to be peaceful, and to make myself more mindful in my life…”

Information about teen retreats can be found at www.bpf.org/teenretreat.html. One is planned for December 28, 2005 to January 2, 2006 at Land of Medicine Buddha in California. Contact LMB@medicinebuddha.org