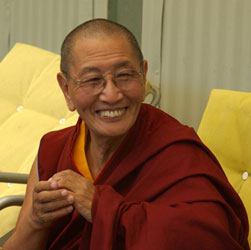 Fabrizio Pallotti asks revered lama, Kirti Tsenshab Rinpoche, the reincarnation of the former abbot of the Kirti Gompa, how best to bring the long retreat practice lines of the Gelug tradition into FPMT.

Q: Rinpoche, other traditions such as the Kagyu and Nyingma have very structured programs for a three-year retreat. For example, in the Kagyu approach, the first month is on the graduated path; the next six months are devoted to the preliminary practices; then for one year one meditates on the generation stage of the deity followed by a second year on the Six Doctrines of Naropa; and the last eight months are spent meditating on mahamudra: a total of three years and three months.

Moreover, Kagyu and Nyingma masters have established several three-year retreat places in the West, places which are used for group retreats and where a structured program is followed. Is a group retreat versus an individual retreat advisable for such a long period of time? And is there a structured system for long retreat in the Gelug tradition?

Kirti Tsenshab Rinpoche: In the Kagyu and Nyingma systems, as you mentioned, there is a tradition of incorporating the practice of listening, reflecting, and meditating in a three-year retreat period.

In most cases the first part of the retreat is dedicated to preliminary practices, for the accumulation of merits and purification. Then practitioners are instructed to undertake the practices of the generation and completion stages of tantra. In general, in order to receive the full benefits of the tantric practices, such as those of the generation and completion stages, one should be fully trained in the common path, what we call the graduated path to enlightenment, or Lam-rim.

In the Gelug tradition, the most important preliminary is the integration of extensive listening, reflecting, and meditating on the shung chenmo, or the great treatises. This provides a very powerful foundation in the mind of the practitioner, who then integrates the vast meaning of the scriptures within the meditations of the graduated path to enlightenment. This becomes the main practice, and reflects the way that the education is structured in the three great monasteries of the Gelug tradition …

The complete article is available as a PDF download.