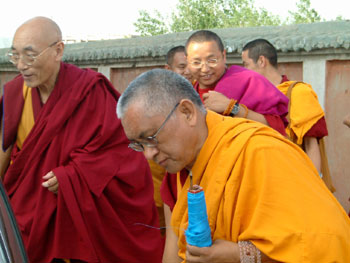 The Enlightenment Experience Celebration ended at Idgaa Choetzinling Monastery in Ulaanbaatar, Mongolia, after a month of Buddhist teachings, an exhibition of a collection of the Buddhas’ relics at the Kalachakra Temple, the distribution of 29,000 prayer books to Buddhist practitioners [one copy for every 80 people in Mongolia], the ordination of 110 new Buddhist monks and nuns, and an International Buddhist Film Festival.

This was the fourth such international event to be held by the Foundation for the Preservation of the Mahayana Tradition (FPMT) and the first time it was located in Mongolia, where it attracted about 100,000 people to the various events. [Previous EECs were held in India and Nepal.]

The event began when two renowned Buddhist masters, Choden Rinpoche and Lama Zopa Rinpoche, together with the Buddhas’ relics, all arrived on the same plane from Seoul. They were welcomed at Ulaanbaatar airport by top government officials and TV cameras. A Mongolian-style police escort took them into town with flashing lights and sirens wailing. Two weeks later, Kyabje Dorje Chang Denma Locho Rinpoche was warmly welcomed at the airport by Lama Zopa Rinpoche and entourage.

On Saka Dawa, the holiest day in the Buddhist calendar, no less than 9,000 Buddhists queued up patiently to view the sacred relics, a world record attendance for the relics exhibition shrine, which has been touring the world for several years. On average days as many as 3,000 devotees poured into Ganden to queue for the blessings and to pay their respects. In addition, about 1,000 people a day attended the four weeks of teachings with as many as 1,500 at the great initiations …

Enduring vignettes of the lamas at EEC…

If twenty-four hours a day, everything you do is motivated by bodhichitta, you accumulate infinite merit. Moreover, every single action becomes a cause not only for your own enlightenment, but also the happiness of every other sentient being.