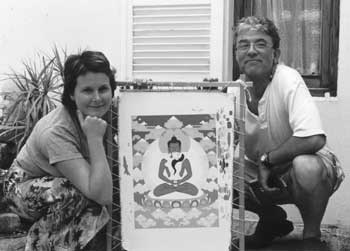 Andy Weber and Dolma Beresford with her thankga painting of Samantabhadra.

Andy Weber spent seven years living and studying the iconographical art of Tibetan Buddhism under the guidance of accomplished masters in India and Nepal. His teachers were Ludhup, who had escaped from Tibet with some 250-year-old scrolls, and the master artist Tsang in Tibet. “Ludhup initiated me into the world of Vajrayana art, and Thargye provided me with a detailed map of that world,” he said.

He and his students now offer their artwork and their services to the wider Dharma community. When Dolma Beresford, born in Dharamsala and raised by Buddhist parents, moved to London, and attained a degree in graphic design, she jumped at the chance to learn from Andy, who, as a friend of her parents, was part of her childhood.

“When Andy said, ‘Come to my course at Jamyang Buddhist Centre!’ I knew I wanted to see him again,” she said. “The idea of escaping the world of deadlines and paying the rent to draw the Buddha appealed to me. It was a weekend that would change my outlook and take my interest in Buddhism in a direction I never thought possible…

Artist Ella Brewer was apprenticed to Andy Weber for six years. A student of Lama Zopa Rinpoche, who has encouraged her painting and teaching work, Ella is one of only two people in New Zealand teaching thangka painting (the other teacher is a Tibetan in Auckland who needs to use an English translator.) She recently moved to Auckland on NZ’s north island, where she is residing at Dorje Chang Institute. She is also using her skills to bring Tibetan art to the wider community.

At the request of Lama Zopa Rinpoche, Ella has already started on thirty-two Mahamudra lineage paintings for the Mahamudra Centre in Coromandel (90 minutes drive from Auckland). Sponsors are being sought so Ella can concentrate on the art works which would otherwise take many years to complete. Ideally she would like to undertake a three-year retreat during which she would doubtless make great progress on the series. She has almost finished the first painting of Manjushri…

Andy is teaching in many Dharma centers, art centers and universities worldwide. He has taught students in Holland for twenty years and he says that “some of those have become very professional and very good. They exhibited some of their work at Maitreya Instituut during the recent CPMT meeting (Mandala December 2004), which everyone really appreciated. What’s more, Lama Zopa mentioned the benefits of thangka painting during his teachings.”

Andy will teach in southern California in April 2005.