A TEACHER TELLS US WHY 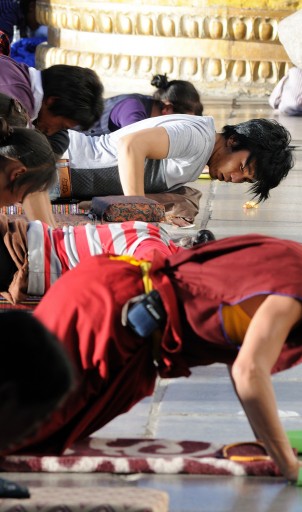 Question: How do I challenge orthodoxy in Tibetan Buddhism but still correctly rely on a spiritual guide?

As an aspiring practitioner and teacher of Buddhism, I often struggle with the question of how to balance respect for tradition, which allows us to cultivate faith in Dharma, while not giving up a healthy level of skepticism and critical inquiry. The process of investigation is an indispensable part of our progression towards a more awakened, more compassionate, and wiser state – the goal of Buddhist practice – and many Western Buddhists come from a perspective that is highly suspicious of orthodoxy or dogma. His Holiness the Dalai Lama often refers to the foundation of Tibetan Buddhism as the “Nalanda Tradition,” which emphasizes studying the Buddhist teachings based not just on faith, but also on rigorous investigation. This emphasis is illustrated by the analogy of a merchant who buys gold only after determining its purity through various tests; in the same way, we need to investigate the Dharma deeply before accepting it, not just taking it at the word of the person who presents it, no matter how impressive or eloquent they may be. Buddhism appeals to this rationality by challenging ingrained ideas about suffering, happiness, and the nature of reality, but when we study with traditionally trained Tibetan teachers, we often find that the teachings are intertwined with cultural assumptions that do not fit neatly with a strictly rational perspective. It turns out that applying rigorous inquiry to traditional Buddhist teachings is more delicate than it appears. A case in point is when we meet the traditional teachings on guru devotion, or reliance on a spiritual guide, as presented in the Tibetan tradition.

All Buddhist traditions strongly emphasize the need to rely on a qualified teacher in order to make progress in the spiritual path, but in the Tibetan tradition, the relationship to the teacher, or lama, takes on even greater significance. As the number of non-Tibetans studying and practicing Tibetan Buddhism has increased, this has also led to an increase in dangers that can arise when students do not develop a healthy approach to this relationship based on clear investigation and understanding. Students may be enchanted by the exotic aura that often surrounds Tibetan lamas, and they may not have the emotional or spiritual maturity to distinguish healthy behavior from unhealthy patterns of emotional dependence. While such patterns are often related to students’ psychological backgrounds, they may also be due to Tibetan teachers’ lack of knowledge of the mentality and culture of their disciples. Western students may be seeking a “quick fix” to their problems or a transcendental spiritual experience, which may unconsciously manifest as excessive devotion to their teacher without a careful examination of the teachings. In order to avoid falling into this type of situation and potentially being seriously traumatized, it is crucial to carefully investigate the teachers with whom we form spiritual relationships and to understand the purpose and objectives of such a relationship.

The language we use to express Dharma concepts is very important. The term “guru devotion” can evoke very strong feelings, both positive and negative. In popular culture, a “guru” is often imagined as a quasi-mystical figure in religious garb, who spouts esoteric knowledge and gathers eager disciples around him or her. This term may also be associated with strange or inappropriate behavior, psychological or sexual abuse, and cult-like devotion. In the Buddhist teachings, however, as explained particularly clearly in texts on the stages of the path (lam-rim), a real guru (“lama” in Tibetan) possesses an abundance of qualities, such as ethical discipline, wisdom, compassion, and the ability to communicate skillfully with disciples. Although we cannot necessarily see all these qualities, we may infer their presence or absence by the teacher’s behavior and by careful, intelligent investigation. The term “devotion” can also be problematic, bringing to mind a type of behavior based more on deep religious faith than on analysis. In the Buddhist teachings, however, the term strongly indicates that one “relies” on the teacher after having investigated him or her to see if they possess the qualities of a qualified teacher. Therefore, I prefer to speak of “reliance on a spiritual friend” rather than guru devotion.

Coming back to the analogy of buying gold, we need to carefully check that the “product” (i.e., the teaching) is of good quality, as well as determining that the person proffering it is trustworthy. Here, when speaking of checking the qualities of a spiritual guide, this may be difficult, given that we may only hear exalted words of praise directed towards a lama, and there is a strong sense that it is taboo to question the teacher’s words or behavior. People may assume that the teacher has powers of clairvoyance and can read people’s minds, or that they must have deep realizations of emptiness, bodhichitta, and so forth. We may also believe that to question any aspect of a lama’s teaching is tantamount to criticizing him or her and will lead to terrible suffering, in this life or future lives. This attitude can lead to all kinds of problems, least of which is our own denial of valid doubts about certain aspects of the teachings that, when not addressed in an open and intelligent way, can later emerge as frustration, regret or resentment. Therefore, it is best to try to express and resolve our doubts and concerns, if not directly with our teacher, then at least with experienced students whom we trust in these matters. Naturally, we need to do this in as skillful way as possible, being aware that cultural and linguistic differences may also play a significant role in our misunderstandings or confusion. 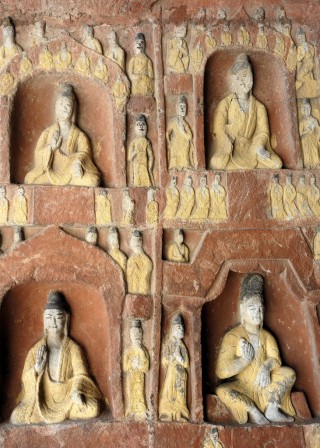 Subjecting our teachers’ words and behavior to careful scrutiny is not at all contradictory to the Buddhist teachings, nor is it forbidden to question the instructions we receive from a teacher. In fact, even Lama Tsongkhapa acknowledges that there may be cases where is necessary to disobey the instructions of a teacher, if we cannot carry them out or follow them. In his Great Treatise on the Stages of the Path to Enlightenment (Lamrim Chenmo), he cites the Cloud of Jewels Sutra, which says “with respect to virtue, act in accord with the gurus’ words, but do not act in accord with the gurus’ words with respect to non-virtue.”1 However, he emphasizes that we need to be careful not to disrespect our teacher, even if we do not carry out his or her instructions: “Rather,” he says, “excuse yourself politely, and do not engage in what you were instructed to do.”2 Thus, it is clear that there is room for flexibility, even in a relationship as sensitive and important as that of a disciple with a master. If we are uncomfortable or doubtful about the teacher’s instructions, we can question them, as long as we do it in a skillful way.

Question: How do the ways in which Tibetans and non-Tibetans challenge orthodoxy differ?

I cannot speak for Tibetans, but I would think that Western students are generally more likely to have difficulties with the views of traditionally educated Tibetan teachers than are Tibetans or other students from traditionally Buddhist cultures. Some obvious examples of views that can prove challenging are beliefs in reincarnation, karma, the continuity of the mind, and so forth, as well as issues related to modern Western culture, such as women’s roles in society, homosexuality, and so forth.

In the Tibetan monastic educational system (especially the Gelug tradition), monks engage in many years of study, memorizing and debating the views of their tradition and monastery. This sharpens their analytic skills and some of them become proficient scholars, who can penetrate deeply into subtle and complex points of Buddhist philosophy. However, their education remains mainly limited to their own tradition and monastery, rarely considering viewpoints of other monasteries or lineages. Although some of the more daring scholars may challenge orthodox views, it would be rare for them to question some of the fundamental assumptions of their tradition, such as karma, rebirth or the existence of other realms of existence. An educated Westerner, on the other hand, will have at least a basic knowledge of scientific thought, which does not accept the existence of phenomena that cannot be observed, and will thus immediately question the existence of such phenomena. We are trained to reject dogma and religious authority, and to develop original ways of thinking (how successful we are at this is debatable). This can cause difficulties when students are presented with Buddhist teachings that talk about reincarnation, gods and hungry ghosts, and other obscure phenomena. It is only natural for us to question such things, but what is for Westerners a totally acceptable mode of questioning may appear to a Tibetan teacher to be unnecessary, rude or even ignorant. One of our greatest challenges as Western Buddhists is thus to learn how to explore our doubts, but to do so in a way that is respectful and skillful. 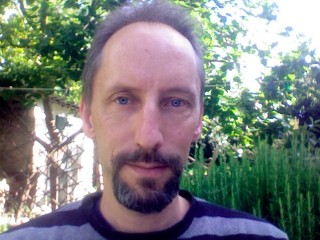 Patrick Lambelet completed the FPMT Masters Program at Istituto Lama Tzong Khapa in 2004 and has been an FPMT registered teacher since 2006. He was the tutor for the online Masters Program from 2008 through 2013, and currently works at Istituto Lama Tzong Khapa. He continues to teach courses in Italy, and has taught a number of times in FPMT centers in the United States.

We are not compelled to meditate by some outside agent, by other people, or by God. Rather, just as we are responsible for our own suffering, so are we solely responsible for our own cure. We have created the situation in which we find ourselves, and it is up to us to create the circumstances for our release. Therefore, as suffering permeates our life, we have to do something in addition to our regular daily routine. This “something” is spiritual practice or, in other words, meditation.